Travancore: Wives who were married to royalty but were never Ranis

Ammachies of Travancore: Wives who were married to royalty ...

https://www.thenewsminute.com › Features
Jul 20, 2016 - “Whenever a stranger goes to Travancore, one of the largest and most ... In the royal family too, much to the disbelief of outsiders, the wife of the ... If she had to go out, it was essential that her consort followed in a separate car.


Ammachies of Travancore: Wives who were married to royalty but were never Ranis 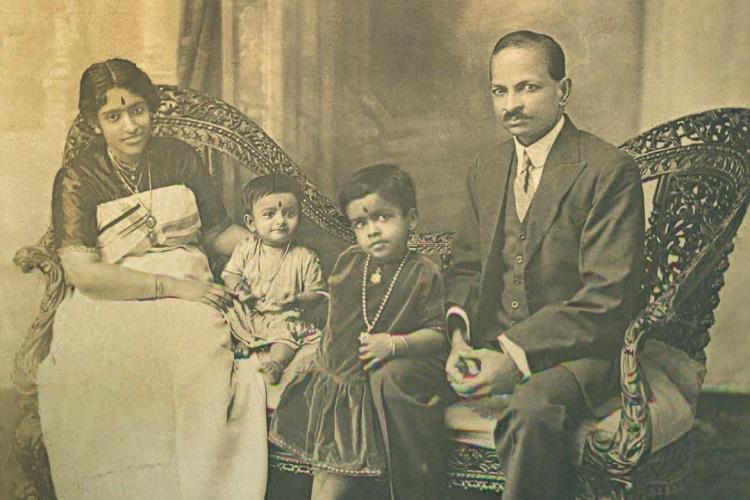 Maharani Sethu Lakshmi Bayi with her consort and children
Features History Wednesday, July 20, 2016 - 16:00
Manu S Pillai Follow @@unampillai
In 1912 a magazine in London carried a feature on the wife of an Indian Maharajah. “Whenever a stranger goes to Travancore, one of the largest and most picturesque native States,” it began, “they always tell him not to address her as ‘Your Highness’. They think this word is too dignified to apply to her. No doubt she is the Ruler’s spouse; but that does not make her the Maharani or even the Rani. She is only Ammachi, just the mother of His Highness’ children, and they believe that word is good enough to express her relationship to the man who is autocrat of more than 2,950,000 people, inhabiting [over] seven thousand square miles of territory, yielding an annual revenue of about £700,000.”
Visitors to Kerala often found themselves fascinated by the matrilineal system that governed succession among its dominant castes. For here, to put it simplistically, a family did not consist of man, wife, and children but of man, sister, and her children. In the royal family too, much to the disbelief of outsiders, the wife of the Maharajah was not his queen—she could only be addressed as ‘the consort’ and had no claims to being a ‘Highness’. There was, however, a Maharani, the difference being that she was either the sister or niece of the ruler, and it was she who produced heirs to the throne through a male ‘consort’ of her own. Power always descended from uncle to nephew and not father to son, and no Maharajah had ever inherited the throne from his father, and no son of his could ever claim anything more than a glamorous bloodline.
So too were the circumstances in which husbands of the Maharanis of Travancore were placed. They had no official standing at court and as late as the 1920s when the ruling queen granted her husband precedence over her chief minister at a banquet, it caused a minor scandal—you could be married to royalty, but you remained a subject. If she had to go out, it was essential that her consort followed in a separate car. At feasts in the palace, the Maharani was served four varieties of dessert—her husband received two. Most tellingly, perhaps, the partners of the princesses of Travancore were not even permitted to sit in their presence, and had always to address their wives as ‘Highnesses’ and never by name. When the aforementioned Maharani decided to ‘modernise’ things and permit her husband to take a seat and to drive with her, her uncle, the Maharajah, ‘much disapproved’ of such radical innovations.
If this was the status of the men who married Maharanis of Travancore, the female consorts of its Maharajahs were in a similar boat. When in the 1860s Theodore Jensen, a Danish painter, arrived in Trivandrum to do a portrait of the ruler and his consort, he was baffled to discover that they would not give him joint sittings even though the painting was to show them together. As Samuel Mateer noted, “The Ammachi…is not a member of the royal household, has neither official nor social position at court, and cannot even be seen in public with the ruler whose associate she is.” When the Maharajahs’ daughters were married, the fathers could never attend the ceremonies—they were his offspring but they were not his matrilineal kin. And when a Maharajah died, his children were not permitted at the funeral. So too when the consort of a Maharani was on his deathbed, he was removed from the palace. They could have been married for decades, but a consort always remained a mere consort and could not defile the palace by dying there.
This was both on account of matrilineal conventions as well as due to reasons of caste. The wife of the Maharajah, in particular, was never his social equal. The Ammachies were chosen from the Nair community, which was the most important non-Brahmin upper-caste in Kerala. Its members, however, did not wear the sacred Brahminical thread and were, therefore, a rank below the Maharajahs of Travancore who had acquired the thread and a social upgrade in the eighteenth century. Food cooked by his consort could never be touched by a Maharajah (though fried items and pickles were exceptions—and it is very likely many princes cheated) and as late as the 1940s, wives of male members of the royal family were not entertained at feasts. As Rukmini Varma, the painter, who was born Princess Bharani Tirunal of Travancore recalls:


The whole family would assemble for this ritual [feast] but not the Ammachies. They couldn’t come anywhere near us when a meal was being eaten and if by accident they did, then the whole meal had to be sent back—because if anyone below caste set foot in the room while the meal was in progress, it would have to be cooked again. Dinner was always a bit more relaxed because that was after sunset, when everything is more relaxed.

For all this, however, the wives of the Maharajahs were not concubines. They were legitimate spouses whose status, in the patriarchal system, is most comparable to morganatic wives i.e. women married to highborn men on the understanding that they could not inherit their titles and estates. Often the Ammachies were strong, accomplished women and their stories with the Maharajahs moving romances. One Maharajah in the 1850s patiently hosted a durbar in honour of Queen Victoria to satisfy his British overlords. But once the formalities were over, he hastened to join his ailing consort, who died that very night leaving him distraught. In 1882 another prince, upon the death of his wife—the woman with whom he could not be seen in public, whose food he was prohibited from touching, and to whom he could never grant more than basic aristocratic status—wrote: “The loss is an irreparable one and it is more than I could bear with all my fortitude.” He didn’t marry again for nearly twenty years. Arumana Ammachi
In 1885, when the then Maharajah lay on his deathbed, “he sent for his Consort and children, and they came before him in the evening very late. He beckoned his daughters to approach close to the cot, and the light not being very bright, he bade his Consort trim the flickering lamp, in order to enable him to see his daughters well, and he gazed on them for a while and wept. His Consort and children also wept; but he told them that God would protect and help them, and asked them to take leave. His Consort, his son, and daughters prostrated themselves at his feet, according to oriental custom, and took their last farewell. On the same night his Consort and his eldest daughter took ill, being overcome with grief[i].” Part of the concern might also have been that this particular Maharajah had left them little money-- his predecessor had ensured that his wife was extremely well taken care of.
History has erased the Ammachies from memory on account of the fact that their sons never succeeded to power—at least the consorts of the Maharanis fathered monarchs and could therefore claim some celebrity, unlike the wives of Maharajahs who disappeared into the shadows after the lifetimes of their royal husbands. Kalyani Pillai, the wife of the Maharajah who ruled from 1860 till 1880 was a poet of great talent, with a phenomenal interest in art, culture, music, and more, emerging as one of the earliest patrons of Raja Ravi Varma. An exquisitely good-looking woman, hers are also some of the earliest portraits Ravi Varma did (a rare honour, for normally other men did not have access to the Maharajah’s consort) -- paintings that have never since been seen, however. Kalyani Pillai (Photo credit: Nicholas Brothers: Madras & Ootacamund, Source: Royal Collection)
She was also a very confident woman, the daughter of the chief minister of neighbouring Cochin State, who had been married once before she met the Maharajah. Visitors to court paid courtesy calls on her, and with her husband, she travelled across India. She took English lessons and invited missionaries home to read the Bible with her and to teach her to paint. If an 1868 photograph is any proof, she was also probably the first Malayali woman to wear a sari. After her husband’s passing, however, an associate noted that “she is very thin and delicate looking, and has lost much of her beauty…She seems so friendless and lonely that I feel sorry for her…” By the time she died in 1909, few outside Trivandrum remembered her.
Then there were consorts such as the one who features in that London magazine from 1912. “She has a light complexion and is short and very stout”, possessed as she was of “an excess of adipose tissue” in a culture where every additional pound was seen as “a sign of prosperity”. This lady too had been married before she was espoused by the Maharajah, the difference being that her husband, a palace employee, went on to achieve tremendous notoriety as a corrupt influence behind the throne. Soon the Maharajah became putty in his hands, the consort retreated to an upstairs suite in her palace where she painted landscapes, and the “former husband of the Maharajah’s present wife” became the real power in the state. When this penultimate ruler of Travancore died, his consort was forgotten too though not her ex-husband.
The last Maharajah of Travancore never took an official consort. While there were rumours that his mother, who was the force behind his throne, and minister had an ‘unholy pact’ to keep him under their thumb and prevent a third influence on the man, the official line was that the Maharajah disapproved of the very matrilineal system that had vested him with power, since the idea of his wife being only the consort and his children being excluded from the privileges of his dynasty were most repugnant to him. Instead he lavished his attention on the offspring of his royal sister, who remembered that after signing over Travancore to the Indian Union in 1949, he went straight to the little girls’ room and resumed a story he was telling from the great Indian epics. Painting by Rukmini Varma of the last surviving consort
But the story of the consorts does not end with the bachelor Maharajah who died in 1991. The final chapter is yet to close, for living in Bangalore in an old colonial house on Richmond Road is the last of the male consorts who married a princess of Travancore. He was 21 when, in 1938, the daughter of the Senior Maharani spotted him from her palanquin during a procession. Before he knew it, he had been elevated as her consort. Independence followed a decade later and the world changed—the princess and he chose to give up their titles and begin a new life away from the kingdom her ancestors ruled. She passed away in 2008, but today, at the grand old age of 100, her husband still remains in their large, old house, as the last of those consorts who married into what was once the House of Travancore.

(Manu S Pillai is the author of The Ivory Throne: Chronicles of the House of Travancore)

[i] The Journal of the National Indian Association