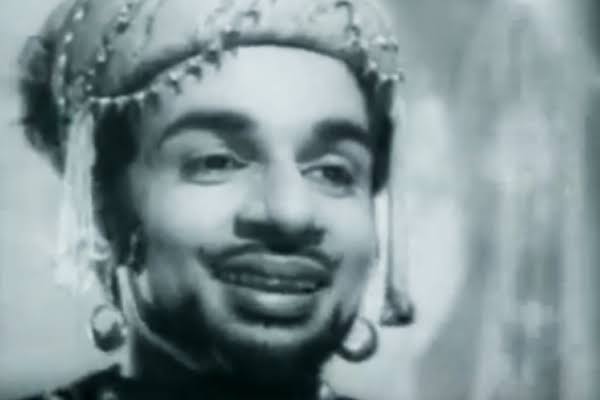 
Kayamkulam Kochunni (born 1818) was a heroic outlaw from Kayamkulam, who lived during the early 19th century. He was active in the Central Travancore area in the present-day Kerala, India. He is said to have stolen from the rich and given to the poor.[1] Legends on his life are part of the folklore of Kerala.[2] His stories are often associated with his friend and outlaw Ithikkara Pakki.[3]

Kayamkulam Kochunni was born in 1818, near Kottukulangara, Karthikapally Taluk in Travancore (present-day Kerala). He spent his childhood and younger ages in Evoor. After his father's death, the family fell to poverty and Kochunni was employed in a grocery store. Later he began stealing and became an outlaw. He was known for stealing from the rich and giving to the poor. Kochunni was once caught by the officials after his lover betrayed him, he escaped and killed her along with her assistant. Following that he went into hiding, during which he stole the Shaligram belonging to the Padmanabhaswamy Temple. Ayilyam Thirunal Rama Varma was the ruler of Travancore and T. Madhava Rao was the Diwan of Travancore at the time. Kochunni was accused of several thefts and two homicides. Both the Palace and police officials failed to find Kochunni, after which a warrior, Arattupuzha Velayudha Panicker, was enlisted with the task, who eventually captured him and submitted to the Diwan. Panicker was honoured by the King. Kochunni was remanded for one year, during which he died in the Travancore jail in 1859. His remains was buried at the Pettah Juma Masjid.[4] According to historians, the Central Archives building in present-day Thiruvananthapuram was formerly a prison in the 19th century and is believed to be the first Travancore prison, which is likely where Kochunni was incarcerated.[5]
However, Kochunni's death is disputed. Another record cites he was imprisoned at Central Prison, Poojappura in his 70s.[6] Some researchers states that it was after the success of the 1966 film that the present account of his death (that he died in September 1859, aged 41) was popularized and dominated while the other account diminished, the movie used the former since it was more suitable for the film's commercial success. As per the other record, he escaped and lived another 36 years. He died at the age of 77 from Tuberculosis at the cow barn of Thoppil tharavadu (family of Thoppil Bhasi) in Vallikunnam. He was staying there undercover as a steward and farm-hand of the family. A woman from the house took care of him during his final days, who was the only one aware of his true identity.[7]
During Kochunni's peak time, the Diwan ordered his capture. The then Tahsildar of Karthikapally Taluk managed to capture him with the help of one of Kochunni's confidant. But Kochunni escaped and killed his confidant and the policeman who arrested him. Later, Kunju Panicker was appointed as the Tahsildar. He sought the help of Kochunni's acquaintances Kochu Pillai, Kopparaparambil Mammad, Kaduvachery Vava, Kottappurathu Bappukunju, Pakkolathu Noorammadhu, and Valiyakulangara Kunjumarakkar. Kochunni was invited to Kochu Pillai's wife's home in Vazhappally and sedated him by drugging food. He was arrested, and while transporting him to Thiruvananthapuram through Kayamkulam backwaters, he regained sense and managed to escape by leaping into the water. It is said that Kochunni was in hideout at Pathanamthitta and Punalur after that and to have returned to Kayamkulam during his final period, and shortly after moved to a secure hideout at Thoppil family. While another of the same account states he was successfully transported to Thiruvananthapuram, incarcerated and hanged after 91 days (in 1859 at the age of 41) and his remains to have buried at the Pettah Juma Masjid. However, there is no documentation about his sentencing in state's jail records or in the Mathilakam documents.[7]

A shrine dedicated to Kochunni is attached to Edappara Maladevar Nada Temple near Kozhencherry that dates back more than one and a half centuries. People there offer candles, incense sticks, ganja, country-made liquor, betel leaves, pan, areca nut, tobacco, etc. to propitiate the deity.[3] There is a small museum at Varanappallil, an ancestral house in Kayamkulam for Kochunni.[2]


Kayamkulam Kochunni is a 1966 Indian Malayalam-language period drama film written, produced and directed by P. A. Thomas. Dialogues were written by Jagathy N. K. Achary. It is based on the life of the 19th century thief Kayamkulam Kochunni, who is known for stealing from rich and giving to poor. The film stars Sathyan, Adoor Bhasi and Manavalan Joseph and K. J. Yesudas. The soundtrack was composed by B. A. Chidambaranath.[1][2]
Kayamkulam Kochunni released on 29 July 1966 was a commercial success at the box office. Its sequel, Kaayamkulam Kochunniyude Makan, was released in 1976.

It was the first Malayalam film about the famed highwayman Kayamkulam Kochunni, a Kerala equivalent of Robin Hood. P. A. Thomas who scripted and directed the film produced it under the production banner, Thomas Pictures. The dialogues were written by Jagathy N. K. Achary. The film marks the acting debut of singer Yesudas, who played a pivotal role. The film was shot at the Shyamala Studios in Chennai.[3]

The music was composed by B. A. Chidambaranath and the lyrics were written by P. Bhaskaran and Abhayadev.

The film was a commercial success at the Kerala box office.[3]

19 September 2014 | by www-yfm – See all my reviews
When this film was released in 1966, Sathyan had far left his youthful days and his on screen charisma had faded, even though he decently plays the part as protagonist(another one of his roles as a thief with a golden heart). His pairing with Usha Kumari, who was average in the film, is also unconvincing. The story was a major letdown as was the mediocre direction.

The only saving grace was the rather good songs. Not much to expect from the film, this is just bad(no doubt it failed at the box office also). Sathyan did better films in his heydays. Better watch them than this.

An adaptation of the real-life story of the legendary highwayman Kayamkulam Kochunni, who lived in the state of Kerala, India, in early 19th century. He is believed to have been a great human being, who robbed the rich, and supported the poor (like the Robin Hood of England)…
This film is not currently playing on MUBI but 30 other great films are. See what’s NOW SHOWING


Other Songs in this movie