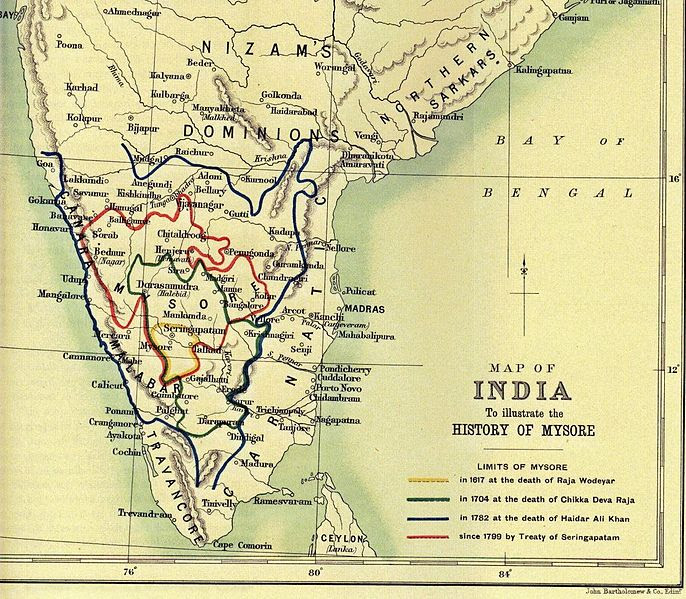 Tipu
came from Mysore to reinstate the authority over Malabar. After the Battle of the Nedumkotta (1789),


Nedumkotta A fortification with red soil

sasi kadukkappilly
Nedumkotta is a fortification in red soil measuring more than 50 kilometers constructed across Kerala in the Territory of Cochin ...
Mysorean invasion of Kerala - Wikipedia, the free encyclopedia
en.wikipedia.org
The relics of the
due to the monsoon flood, the stiff resistance of the Travancore forces and news about the attack of British in Srirangapatnam he went back.............

https://www.linkedin.com/pulse/tipu-sultan-debasis-samanta?forceNoSplash=true
Nov 20, 2015 - ... Ali suddenly died from cancer in December 1782 during the Second Anglo-Mysore War. ... In the Fourth Anglo-Mysore War, the forces of the British East India .... After the Battle of the Nedumkotta (1789), due to the monsoon flood, the ... Napoleon was unsuccessful in this strategy, losing the Siege of Acre .

https://en.wikipedia.org/wiki/Mysorean_invasion_of_Kerala
The Mysorean invasion of Kerala (1766–1792) was the military invasion of Malabar (northern ..... It was here Tipu learned of Hyder Ali's sudden death due to cancer. .... The Travancorean forces regrouped, but the onset of monsoons prevented Tipu ... at Bhoothathankettu causing heavy flash floods downstream Periyar river.

https://en.wikipedia.org/wiki/Tipu_Sultan
Tipu Sultan 20 November 1750 – 4 May 1799 also known as the Tiger of Mysore, and Tipu ... Tipu Sultan deployed the rockets against advances of British forces and their allies in ..... due to the monsoon flood, the stiff resistance of the Travancore forces and ..... A lot of centuries old religious manuscripts were lost forever.

Battle of the Nedumkotta - Wikipedia, the free encyclopedia

https://en.wikipedia.org/wiki/Operation_U-Go
The U Go offensive, or Operation C (ウ号作戦), was the Japanese offensive launched in March ... In 1942, the Japanese Army had driven the British, Indian and Chinese ... When heavy monsoon rains stopped campaigning, the British and Indian .... The Allies were preparing to take the offensive themselves in early 1944.

Origins of the Japanese plan

In 1942, the Japanese Army had driven the British, Indian and Chinese troops out of Burma. When heavy monsoon rains stopped campaigning, the British and Indian troops had occupied Imphal, the capital of Manipur state

Mutaguchi continued to order fresh attacks, but by late June it was clear that the starving and disease-ridden Japanese formations were in no state to obey.[heavy monsoon rains started in june] When he realised that none of his formations were obeying his orders for a renewed attack, Mutaguchi finally ordered the offensive to be broken off on 3 July. The Japanese, reduced in many cases to a rabble, fell back to the Chindwin, abandoning their artillery, transport, and soldiers too sick to walk.

https://en.wikipedia.org/wiki/Burma_Campaign
The Burma Campaign in the South-East Asian theatre of World War II was fought primarily ... The climate of the region is dominated by the seasonal monsoon rains, which ... from late 1942 to early 1944; the 1944 Japanese invasion of India which .... The leading elements of the Thai Phayap Army crossed the border into the ...

https://en.wikipedia.org/wiki/Burma_Campaign_1944–45
Chinese Civil War · Soviet–Japanese Border · French–Thai · Ili Rebellion. The Burma Campaign in the South-East Asian Theatre of World War II was fought primarily by ... In a final operation just before the end of the war, Japanese forces which had ... As the monsoon rains ended late in 1944, the Allies were preparing to ...

Why did the Japanese empire stop at the borders of India in WW2 ...

https://www.quora.com/Why-did-the-Japanese-empire-stop-at-the-borders-of-India-in-...
Jul 6, 2016 - It was a long hard battle for them to get through Burma. They ran out of strength ... was the Battle of Imphal in 1944 in stopping a Japanese invasion of India? ... a punishing guerrilla campaign against the Japanese forces.

The Indian Army, 1939–47: Experience and Development

https://books.google.co.in/books?isbn=1317027647
Patrick Rose, ‎Alan Jeffreys - 2016 - ‎History
In reserve within the 14th Army were the 5th Indian and 11th East African Divisions ... where the 14th Army had stopped the Japanese invasion of India in June 1944. When the wet south west monsoon broke in May 1945, he would have to ... road through the jungle-covered mountains on the Indo/Burmese border and in the ...

Battles and operations of the Indian National Army - Wikipedia, the ...

https://en.wikipedia.org/wiki/Battles_and_operations_of_the_Indian_National_Army
The Battles and Operations involving the Indian National Army during World War II were all .... In March 1944, the Japanese forces began its offensive into India's eastern ... With the offensive more or less stopped by mid-May in the face of fierce ... compounded by the Monsoon rains which rendered the Japanese supply ...