The earliest counting devices known to man were his own hands and fingers.

If that wasn't enough, things in nature were used like shells, 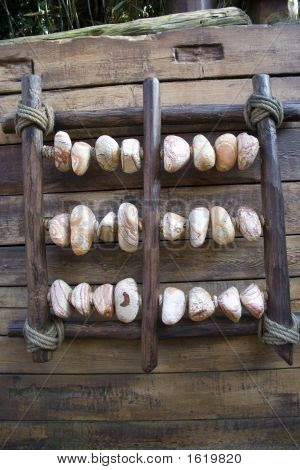 twigs, pebbles, stones, and so forth. It is a good idea to think about the history of arithmetic, mathematics, writing and recorded information. Man's invention of the computer resulted from man's need to quantify, to count and to do mathematic calculations. Long before the computer, in the Roman Empire, Ancient Asia, and other parts of the World, man was inventing easier and faster ways of counting and calculating. 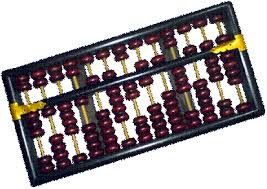 The Salamis tablet
was no pocket calculator: a marble slab measuring 150 x 75 x 4.5 cm. (59 x 29,5 x 1,7 in.) and weighing 130 kg. (286 lb.), it was used in Babylon as early as 300 BC. As an object, the tablet has the extreme simplicity of the raw material: a stone piece with etched elements, it was originally thought of as a gaming board. Gaming is, after all, counting. The tablet’s two sets of grooves –and spaces in-between them- are used in conjunction with pebbles or beads, and the symbols in the periphery, to create a well-determined system that allowed users to consistently perform the four basic operations of addition, subtraction, multiplication and division. The Salamis tablet offered rigor and permanence to the important act of counting. The selection of durable and monolithic marble and the effort of etching a system in it to allow for the same process to take place over and over again, 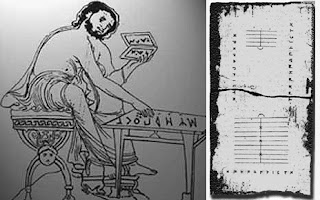 One of the first mechanical computing machines, around 1642.

In 1801 a Frenchman, Joseph-Marie Jacquard
builds a loom that weaves by reading punched holes stored on small sheets of hardwood. These plates are then inserted into the loom which reads (retrieves) the pattern and creates(process) the weave. Powered by water, this "machine" came 140 years before the development of the modern computer.

begins his lifelong quest for a programmable machine.

Working model created in 1822.
Although Babbage was a poor communicator and record-keeper, his difference engine is sufficiently developed
by 1842  that Ada Lovelace uses it to mechanically translate a short written work.


She is generally regarded as the first programmer


to mechanically translate a short written work. She is generally regarded as the first programmer.
Twelve years later George Boole, recognized as the father of computer science.

Father of computer science.
Birth: 2 Nov 1815
Date of Death: 8 Dec 1864 John Boole was a shoe maker, but was more interested in math, and science. He was particularliy interested in how math was used to make scientific instruments.Boole was offered the position of the chair of mathematics at Queens College, Cork in 1849. In August, 1849, it was announced that Boole would become the first professor of mathematics at Queens College, Cork. In 1851, he was appointed as Dean of Science. came from poverty, but still pursued an education – teaching himself when he had to. His career was halted, as he assumed the responsibility of taking care of his parents and siblings, but he pursued his dreams.while professor of Mathematics at Cork University, writes An Investigation of the Laws of Thought(1854), and is generally recognized as the
father of computer science.
C. The Electromechanical Age: 1840 -1940.
The Beginnings of Telecommunication.Voltaic Battery.

Electronic Numerical Integrator and Computer (ENIAC)1940Used vacuum tubes (not mechanical devices) to do its calculations.1946
The First Stored-Program Computer(s):-

The Manchester University Mark I (prototype).1948

1951
The Four Generations of Digital Computing.:-


The Third Generation (1964-1979):-Individual transistors were replaced by integrated circuits.