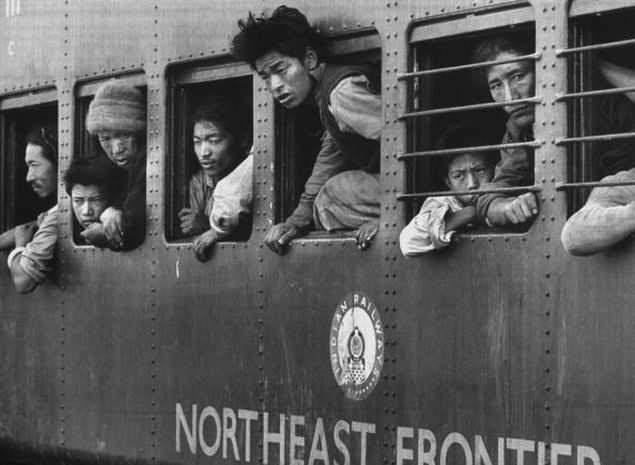 www.rediff.com › News
Dec 4, 2012 - The story of the 1962 war with China has all the elements of a dramatic ... The generous and prompt response by JFK made him an icon in India. But the ... 1962 and announced that it would withdraw from captured territory of ...

Last updated on: December 04, 2012 23:29 IST
The story of the 1962 war with China has all the elements of a dramatic historical event.
Nehru's handling of the crisis and panic reactions were in marked contrast to the cool and confident Kennedy.
The generous and prompt response by JFK made him an icon in India. But the US State Department, under pressure from Pakistan and with British support, scuttled the chances of a more lasting India-US alliance, say Colonel Anil Athale (retd).
For most Indians, the dominant memory of India-United States relations continues to be the presence of the USS Enterprise in the Bay of Bengal during the 1971 Bangladesh war.
During the 1962 border conflict, it was the US that came to India's rescue and there were plans to send the USS Kitty Hawk aircraft carrier to the Bay of Bengal to support India against a possible Chinese invasion.
Many of my generation remember vividly how then American President John F Kennedy had become one of the most popular figures in India -- so much so that most paan shops, (the true barometer of public opinion in India) routinely had Kennedy's photograph alongside the familiar one of Jawaharlal Nehru and Mahatma Gandhi.
The Sino-Indian border conflict coincided with the Cuban Missile Crisis and was largely ignored in the world media. Yet today, in retrospect, this remains a major issue in the politics of Asia while the Cuban Missile Crisis is of academic value after the demise of the Soviet Union.
The future world will bear a heavy impact of this military clash between the two Asian giants. The Sino-Indian clash sounded a virtual death knell for the Communist movement in India, till then the best organised political party after the Indian National Congress.
If Communism was to triumph in India, the history of the Cold War era may well have ended very differently.
In November 1963 when Kennedy was assassinated, he was genuinely mourned by millions of Indians. He was seen by many Indians as the great big hope for the future of mankind. Aside from his obvious personal charisma, the influence Kennedy wielded in India had much to do with the policies his administration followed vis a vis India.
It was one period in the history of otherwise difficult India-US relations; when the Indians regarded the US as their friend. The prompt and generous American response to Indian needs at the time of military reverses against the Chinese in October/November 1962, had a deep impact on the Indian psyche.
President Kennedy was preoccupied in dealing with the Cuban crisis and he left it to then US ambassador Professor John Kenneth Galbraith to handle the situation, supporting him to the hilt.
When the Indian situation became particularly desperate, US Air Force squadrons in the Philippines were alerted; through its contacts in Warsaw, the US conveyed its resolve to the Chinese to come to India's assistance.
C-130 Hercules aircraft carried out drops of arms and ammunition supplies as well as essential clothing to Indian soldiers on the battlefront.
Indian national morale had hit rock bottom on November 18, 1962 when news of further reverses reached New Delhi. The Indians felt isolated, vulnerable and betrayed, when even the 'friends' of India took ambivalent positions.
On October 25, 1962, when war with the United States was potentially imminent, the Soviet newspaper Pravda published a front-page article that put the entire blame for the 1962 war with China on India.
The article called the McMahon line, which New Delhi accepted, 'notorious', 'the result of British imperialism', and legally invalid.
Pravda also accused India of being incited by imperialists and being the main ringleaders of the conflict. The Soviet Union's hostile attitude contrasted with President Kennedy's generous help to India in its hour of need. This made a deep impression on the Indians.
Professor Galbraith, speaking to me in 2003, recalled the sea change that had occurred in Indian attitude towards the Americans. American aircraft regularly landed in Delhi and carried out photo missions over the Indo-Tibet border.


These aerial photographs were of great value since India had no maps of the areas of conflict. Then US assistant secretary of state Roger Hilsman, himself a veteran of the Burma campaign in World War II, personally coordinated the aid effort.
The Chinese declared a 'unilateral cease-fire' on November 21, 1962 and announced that it would withdraw from captured territory of Arunachal Pradesh. It is true the Chinese had over extended their lines of communication and would have found it difficult to maintain themselves on the Himalayan foothills.
But it is equally possible that the threat of USAF intervention as well as the threat to China conveyed in Warsaw played a major role in the Chinese decision.
The India-US honeymoon barely lasted a year or so. According to Galbraith, old imperialists warhorses like Duncan Syndys and Louis Mountbatten played a major role in making India drift away from the West.
No sooner had the fighting ended, Pakistan, with tacit British support, demanded that India 'solve' the Kashmir issue.
There was talk of 'joint' control over the Kashmir valley. It seemed that India was prepared to concede some ground in Kashmir, but Pakistan insisted on not just the valley, but also the Doda-Kishtwar districts as essential to control the water sources of major rivers.
Once Nehru became aware of these designs, the Indians hardened their position on Kashmir. Free from the immediate threat of the Cuban crisis, the Soviet Union also modified its position. It was almost back to square one, as far as India-US relations were concerned.
But there were some enduring legacies of this brief honeymoon. Under Biju Patnaik's stewardship, Indian intelligence established close relations with the Central Intelligence Agency for support of Tibetan resistance.
The second and more troubling inheritance is that India deliberately did not develop alternative land routes (via Manali and the Rohatang pass) to Ladakh as its claim over the Kashmir valley was based on the need to keep the Srinagar-Leh route open.
Sadly, this mindset and sheer inertia in the establishment continued even after 1972 when the Sino-US equations changed.
We woke up to the alternative route for Ladakh only after the 1999 Kargil adventure by Pakistan. This is in spite of the historical fact that in August/September 1948 the bulk of reinforcements to Leh traveled there by the Manali route.
On October 16, 1964, China carried out a nuclear test. The US was then keen that India should follow suit. The seeds of the Indian nuclear weapons programme were sown then with the Americans not averse to the Indian efforts.
Another hardly acknowledged policy change was the Indian attitude to the then ongoing conflict in South East Asia (Vietnam, Laos and Cambodia). Indian criticism of American actions became muted. India also provided logistical help to the Americans.
As far as China was concerned, from 1962 onwards, India was no longer following 'non alignment'. But such is the veil of secrecy that these issues are seldom discussed openly even though 50 years have gone by.
The story of 1962 has all the elements of a dramatic historical event. There is the fact of intriguing coincidence of major events of the Cuban Missile Crisis and Chinese actions.
Nehru's handling of the crisis and panic reactions were in marked contrast to the cool and confident Kennedy. The generous and prompt response by JFK made him an icon in India. But the US State Department, under pressure from Pakistan and with British support, scuttled the chances of an India-US alliance.
The story of six rounds of talks over Kashmir between India and Pakistan, held in 1963, tell a story that keeps getting repeated even in the 21st century. The American flip-flop over Af-Pak, its double standards on terrorism and the familiar British mollycoddling of Pakistan, are themes that reoccur in the present.
Colonel Anil Athale (retd) is co-author of the official history of the India-China War was a fellow at the Kennedy Centre in 2003.

https://books.google.co.in/books?isbn=0815727003
Bruce Riedel - 2015 - ‎Political Science
The Chinese attack on India that began in October 1962 inflicted major ... The Soviet decision to withdraw its missiles from Cuba was made possible by a quiet ... In India Kennedy swiftly assured Nehru of American support and warned China . 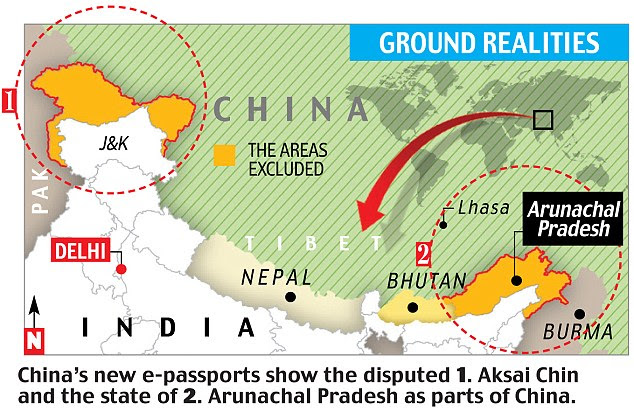 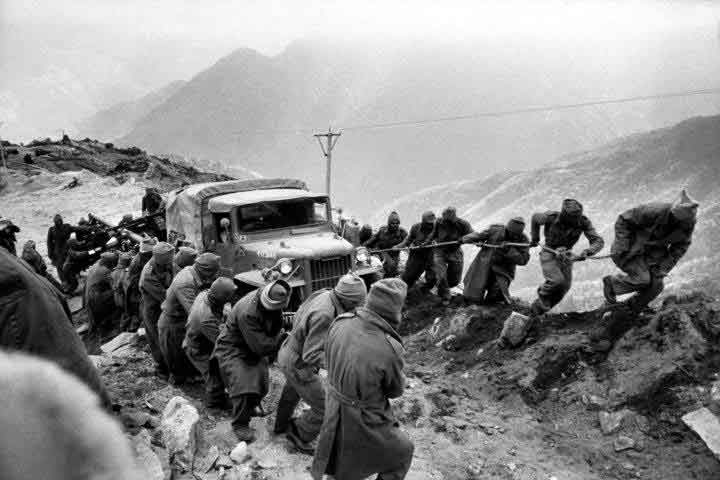