Cars made by Ferrari, Bugatti, Maserati, Lamborghini or Bentley are engineering marvels not suited for India.


When a 2.7-crore Lamborghini caught fire in Delhi

The car was later towed to the Badarpur police station for further investigation. Gallardo, which was discontinued in 2013, is a rear-engine car with a 5.5 litre V10 engine. During its 10 years of production run, Lamborghini sold over 14,000 units worldwide, making it the best seller from the Italian car maker.
Huracan, launched in 2014, is Lamborghini's current flagship model in the market.


In 2012, a 26-year-old man died when he crashed his orange Lamborghini, worth approximately Rs 3 crore, on the BRT corridor between Chirag Dilli and Moolchand in New Delhi. Police said he was driving at over 200 kmph and not wearing his seat belt when the accident occurred. The orange Lamborghini that crashed on the BRT corridor in 2012
He lost control while trying to overtake a vehicle, climbed the car-bus lane separator and rammed into a bus stop.
PC Jewellers, the initial owners of the ill-fated Lamborghini Gallardo, got rid of the car as they found it nearly uncontrollable on Indian roads.
Cars made by Ferrari, Bugatti, Maserati, Lamborghini or Bentley are engineering marvels but some experts say they are not suited for under-developed markets and conditions such as those found in India.


Get, set, crash: It didn't end well for these super cars in India

All the tyres and the rear left portion of the speeding Lamborghini were completely damaged.


A wise man – Spiderman's Uncle Ben – once said: "With great power comes great responsibility." Too bad the lesson did not catch on among Indians driving super cars.
The roads in the country remain narrow, the traffic chaotic and empty stretches rare, but they have never stopped some of these drivers – including a man who crashed his Lamborghini Murcielago at the India Gate on Friday and abandoned it – from going overboard as they show off.
Others are simply struck by bad luck and, we cannot stress this enough, bad roads.
Here are a few super car, super expensive crashes and goof-ups in the past few years:
Crash course in valet parking
In 2014, a valet at a five-star hotel in Delhi crashed a Lamborghini Gallardo into a concrete wall in front of horrified guests, causing damage of up to Rs 2 crore. Photos of the aftermath showed the severely crumpled front end of the sleek white super car, its hood crumpled by a wall.
The valet, who had been working at the hotel for 10 years, was said to have lost control of the Italian speedster on the slippery forecourt after an early afternoon shower.

Also read: Get, set, crash: It didn't end well for these super cars in India 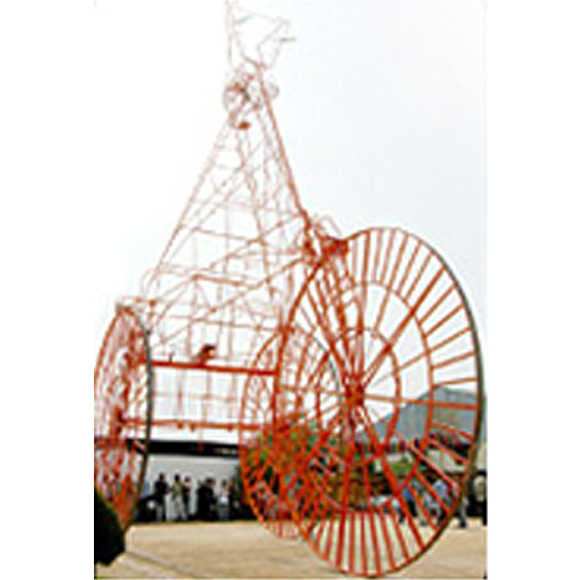 
To get such articles in your inbox


His passion for turning metal scrap into objects has won him a mention in the Guinness Book of World Records. Kanyaboina Sudhakar, the owner of Sudha Cars Museum in Hyderabad, the first and only museum of wacky, hand-made cars in the world, has a portfolio of over 100 quirky designs.
Click NEXT to read more...

Anything but a Box

You can’t go racing in these cars but they sure can attract a crowd. Their maker had stopped displaying them at traffic safety weeks, as they were causing traffic jams

Smiley Car: Built on a Maruti van base primarily for road shows and museum exhibitions
It is fair to say that the automotive aesthetics that guide K Sudhakar—the proprietor, chief patron and sole contributor to the Sudha Car Museum—would bemuse industrial designers. He has made roadworthy vehicles that resemble a cup and saucer, a cricket ball, a football and a shivling, among other objects. His two decades in the field have resulted in numerous such vehicles, of which 160 are currently on display at the museum in Hyderabad.
“This is only a hobby,” Sudhakar says, clarifying that his real work is at the family’s printing business. He felt the first indescribable pull of machinery over two decades ago, walking past the local roadside repairman on his way to school. Babu Khan distilled years’ worth of knowledge to Sudhakar as they both tinkered and toyed with cars at his workshop. They had nothing in common but their childlike determination to dismantle and reconstruct. “He taught me how to start building a car. It had to begin with visualisation,” Sudhakar says.
His first near-brush with fame came in 1996, when he built the world’s smallest double-decker—a backbreaking 8 ft 8 inch. The people at Guinness Book of World Records got back to say he’d be eligible for a record if they ever created a category for his achievement. (His entry for the largest tricycle—42 ft high, weighing three tonnes—was admitted). In 1997, city police requested him to hold a roadshow for the traffic safety week. He did it with 80 weirdly shaped cars, buses and bicycles. The event was so popular that the police ordered repeats until the show itself became the cause of traffic snarls. Sudhakar believes that over 2 lakh people saw the show.

He guessed that people would pay to view his novelties, and he opened the museum with 70 vehicles on three floors over two acres of land. Today, on a good day, it attracts anywhere between 3,000 and 4,000 visitors who pay Rs 30 for a ticket (half that much for children). His vehicles are used in tourism and amusement parks, and clients who prize the inherent weirdness of these things come to him with requests and a hefty cheques. He estimates that each car costs Rs 1.5 lakh to make. He makes them out of scrap—mild steel—acquired from the 50-odd junkyards around Hyderabad. It costs extra when external talent is required. He usually has three workers helping him create these cars, but right now he has a golf ball car under construction; it has 260–300 hand-crafted dimples. That needs more than three pairs of hands.
His clients now “are all commercial people”, Sudhakar says. But he isn’t really in it for the money. “I reject jobs unless they are interesting for me. Anything modern? I refuse to touch it. But whacky and vintage? Yes. I will do any car I’m excited about. That way, when I start work on it, I don’t lose my enthusiasm for it.” He says that each car takes between two months and a year to build, and that’s only the exterior. “Everything is as per norms. Only the shape is different.” Sudhakar’s vehicles are built around motorcycle engines, and they weigh 150–200 kg. They can be driven comfortably at speeds up to 45 kmph. “But these are meant for road shows and museums,” he says.


Image: Museum has a portfolio of over 100 quirky designs, including the world's largest tricycle.
Photographs: Source: sudhacars.com