Irani showers Amethi with 'gifts' - The Times of India 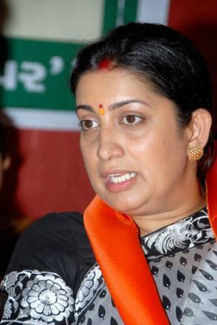 Irani announced the Centre's approval to several long-standing demands of farmers and poor. Following up on her visit to Amethi on May 12, when farmers had sought fertilizer stocks for Amethi to be offloaded in Gauriganj instead of Rae Bareli, Irani said, "I am happy to say that the first railway rake of fertilisers was delivered at Gauriganj in Amethi on May 25. Farmers will no longer have to be cane-charged to get their quota of fertiliser."

Among other "gifts" to Amethi on the completion of Modi government's first year, the ministry of Railways granted approval for the doubling of the Unchahar-Amethi railway track to facilitate train movement, a soil testing laboratory for farmers, a statue of a Kargil martyr, and ambulance services for Haliyapur.

Apna Dal MP from Pratapgarh, Harivansh Singh, constant companion to Irani on Tuesday, also announced the setting up of a women's degree college, and a women's polytechnic, in one and two years respectively.

Irani's Tuesday address steered clear of attack on Rahul. When asked, Irani said, "He talked about the politics of change. So I invited him, the last time I came, to participate in our programme. But his absence today is telling."

As a grand Diwali bonanza for her "sisters in Amethi", Irani said she will return to Amethi to pay the first premium - like she did on Tuesday - for women beneficiaries identified under the scheme.

"This time, I noticed only a handful of women came out to participate in this initiative. Next time I come, I would like to hold a special programme for them, where they receive the same benefits that the men in Amethi did," she said.