Swati Mathur,TNN | May 28, 2015, 06.41 AM IST
Comments
More
A
A
READ MORE samajwadi party|Indo-Gangetic plain|Akhilesh Yadav
RELATED
Even as the debate over the land acquisition bill threatens to boil over across India, the Samajwadi Party-led government in Uttar Pradesh has acquired nearly 3,000 hectares of fertile, multi-cropped land for its sixlane Agra-Lucknow greenfield expressway project without a murmur of dissent.

At a time when farmer groups were registering their protests against the alleged dilution of the consent clause in the NDA government's land ordinance, 30,074 farmers in UP were giving up fertile tracts of the Indo-Gangetic plain, willingly , and, in many cases, in record time.

So how did this speedy acquisition for the Rs 15,000 crore project happen?

By keeping farmers happy, Uttar Pradesh Chief Minister Akhilesh Yadav told TOI. When UP Expressway Industrial Development Authority (UPEIDA), the nodal agency for implementing the project, set out to acquire land for the developers of the expressway project, it decided to avoid the contentious "acquisition" process almost entirely . "Instead of acquiring land as is usually done, it was decided to purchase land from far mers through a mutual agreement. To make the transaction more lucrative, land owners were offered four times the circle rates (CR) in rural areas, and twice the CR in urban parts, as purchase cost. Acquisition was only considered in cases where mutual agreement failed," said Navneet Sehgal, chief executive, UPEIDA. The government's flagship 302-km expressway is a six-lane (expandable to eight) access controlled greenfield project, the longest in the country till date. To build it by October 2016, as the chief minister has promised to do, the UP government needs a total of 3,368.60 hectares of land cutting across 232 revenue villages from Agra to Lucknow, and passing through the districts of Mainpuri, Etawah, Kannauj, Auraiyya and Unnao. In the 270 days between June 2014 and January this year, UPEIDA completed about 27,000 registries at the rate of about 10 a day, arguably the fastest yet, for a government-run expressway project of this magnitude.

To achieve this, UPEIDA paid, till May 15, 2015, Rs 2,844.55 crore to make an outright purchase of 2,824.16 hec tares of land from individual land owners, and 303.29 hectares from government departments, almost 93% of the total land it needed. Assistant CEO UPEIDA, Ashutosh Dubey said, "The government set up rate fixation committees under the chairmanship of the district magistrate to arrive at a mutually agreeable rate. After the approval of the CEO, land owners were given four times, or twice the CR depending on the location of their land. Apart from their land holdings, owners were also compensated for permanent structures built on their land, and for unharvested crops."

When TOI contacted land owners who gave up their land through a mutual agreement with the state government, reactions were mixed. In Unnao, which falls under segment 5 of the expressway project and is being developed by Larsen & Toubro Limited, Jagdamba Singh, a resident of Matariya village, confirmed he had received four times the circle rate. "My village was on the Unnao-Lucknow border, but on the Unnao side. My compensation, as a result, was paid according to the prevailing DM circle rates in Unnao. The neighbouring village that falls in Lucknow, however, received a higher compensation. So even though I got four times, I felt cheated," Singh said.

In Etawah's Takha tehsil, Bakridan begum walked away with a compensation of Rs 8.91 lakh for selling 2.5 bighas of land held in her name. Her son, Naseem Khan told TOI, "We used about Rs 98,000 for a wedding in the family. We are also in advanced stages of talks over the purchase of additional agriculture land with the compensation money we received." In both cases, Singh and Khan said their families will remain invested in farming and did not plan to use the surplus funds to diversify their businesses.

Not all land holders, however, were agreeable to selling their land to the government. In such cases, UP opted for the land acquisition process as prescribed under the Land Acquisition, Rehabilitation and Resettlement Act of 2013, and acquired 160.28 hectares of land. Here, while the rate of compensation remained the same, beneficiaries were offered an extra payment at an interest rate prescribed within the state's rules.
READ ALSO: Lucknow-Agra e-way to have 8 lanes all along the stretch
The benefits of the dual model -acquisition plus purchase -were many . "This model allowed UP to facilitate land transfer to developers in record time, Dubey said. Since the state's pur chase-acquisition process started in June last year, UPEIDA now has a land pool of 3,287.73 hectares of the 3,368.60 hectares it needed; that's 97.6% of the land it needed, organized in less than one year.

The success of the Agra-Lucknow "expressway" model of acquiring land through mutual agreements and through the acquisition route has now been extended to other construction projects as well. "It is a smoother, faster process. More significantly, though, farmers and land holders get a much better deal for their land than they would if we went the acquisition way . That would have been also much more time-consuming,Dubey added."

Politically , too, the Lucknow-Agra expressway project is expected to yield big benefits for the Samajwadi Party .With chief minister Akhilesh Yadav FOCUSING on "doubling the speed to triple the economy", the project not only reduces travel time between Delhi and Lucknow, but also promises to become a hub around which industrial activity can flourish. More significantly , at a time when the land acquisition legislation remains a controversial, hot button issue, UP has charted its own course with the expressway . 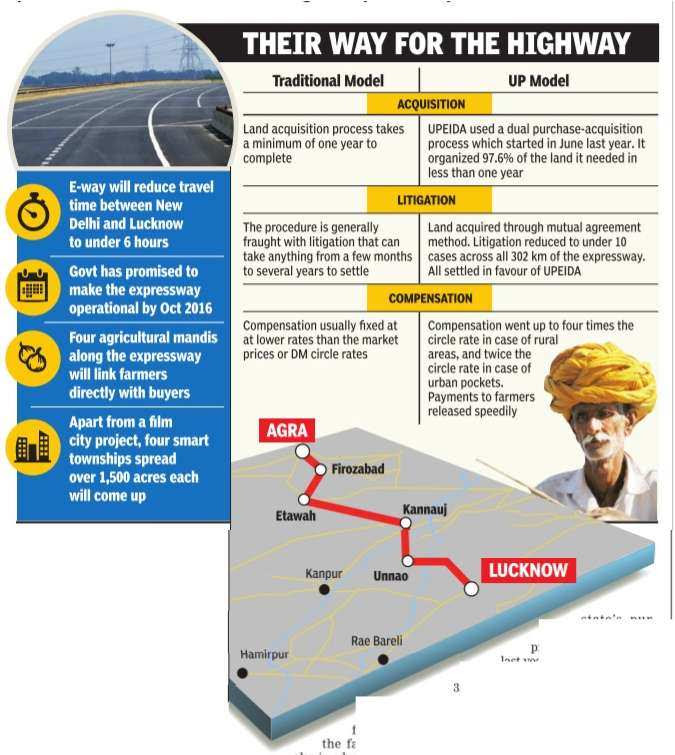 Stay updated on the go with Times of India News App. Click here to download it for your device.