Global warming could sink large parts of Kochi: Scientists -[we shall overcome] 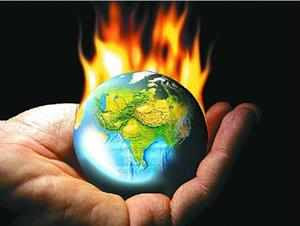 Inundation scenarios created by NIO scientists R. Mani Murali and P.K. Dinesh Kumar using satellite imagery and a digital elevation model have also warned that Kochi, a city the duo claims has "expanded rapidly and heavily stressed from environmental perspectives", will create "harmful effects" for the population as well as the coastal environment and severely impact fishing, agriculture and other socio-economic activity.

The two scenarios simulated by the scientists for a one-metre and two-metre sea level rise are in sync with the globally accepted levels of sea rise of 0.5 metre to two- metres over the coming century.

"For the sea level rise scenarios of 1m and 2m, the total inundation zones were estimated to be 169.11 km2 and 598.83 km2 respectively using Geographic Information System (GIS). The losses of urban areas were estimated at 43 km2 and 187 km2 for the 1m and 2m sea level rise respectively which is alarming information for the most densely populated state of India," said the research paper published earlier this year.

"The results obtained conclusively point that sea level rise scenarios will bring profound effects on the land use and land cover classes as well as on coastal landforms in the study region. Coastal inundation would leave ocean front and inland properties vulnerable," the study further says, adding that increase in water levels would alter the coastal drainage gradients resulting in flooding and intrusion of salt water in coastal acquifers.

Kochi, formerly known as Cochin, is the second most populous city in Kerala and serves as an important maritime trade, fishing and recreational, medical tourism hub.

Most of the picturesque city lies at sea level and is spread along a coastline around 48 km in length.

The reason why the NIO report gains immediate significance is because of the rapid urbanization, which has brought human settlements perilously close to the Arabian sea.

The city already has the inglorious distinction of having the highest number of Coastal Regulatory Zone (CRZ) violations across Kerala, which if one goes by the study, now stand the risk of being submerged to the sea level rise in the coming years.

"With the projected inundation of this magnitude, the coastal zone would be at risk of flooding, where several near shore settlements will be impacted severely. Damages to this coastal city cannot be observed in isolation as it is linked with other regions through economic and cultural ties. Changes will affect the hinterlands too and chain reactions may follow. Urban planning will be confronted with a number of anticipatory issues including adaptation strategies," the report warns.

Asking the state authorities and other stakeholders to gear up for rising sea levels from "this second itself", the scientists have urged devising preventive planning, adaptive management techniques and allocation of future land use, keeping in mind the probable inundation zones charted out in the study.

"Mostly, agricultural lands, urban areas and vegetation zones are affected in this region. Alternate or modified agricultural practices, security for the fresh water, managing the urban and industrial areas should be initiated from this second itself," the report states.

Jun 9, 2014 - Until now, numerous studies of magnetic deflector shields have ... into the space around the craft and allow the Sun's ultraviolet light to ionise it ...

scenes on space projects, not only in the area of solar cells, but also in many other fields ... light arriving from the Sun into an electrical current. This is exact


WE SHALL OVERCOME SOMEDAY, Graphics Enhanced Karaoke of a Freedom-song

by bitsip
FREEDOM AND CIVIL-RIGHTS "We Shall Overcome", a song that became the key anthem of the American Civil Rights Movement ...