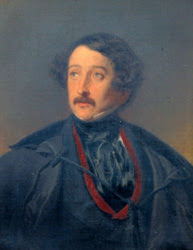 This is the home page for one of England's lesser-known but influential scientists: an astronomer, meteorologist and magnetician John Caldecott FRS (1801-1849). I am currently preparing a biography of Caldecott with particular reference to his role in the establishment of an observatory in Trivandrum (Kerala, India) and subsequent observations by successors Alan Broun and Alexander Crichton Mitchell. It was Mitchell's Directorship of the Observatory that led indirectly into his (Mitchell's) invention of the anti-submarine harbour defence system known as indicator loops. If you are a descendant of John Caldecott I would be pleased to hear from you.

John Caldecott was born on 16th September 1801 in the parish of Finsbury, London, just a few miles to the north east of the city centre. He was christened 1 Nov 1801 at the family church - St Luke’s Church in Old Street - but now demolished. His mother Susannah was 20 and his father John (Snr) was 31. By November 1818 the father (John Snr) had not succeeded in getting jobs for his elder sons John (Jnr) and William. John was one month too young to take an opening at Bank of England. Caldecott trained as an architect on the advice of George Dance, one of London's foremeost architects, and a member of the same church. It was George's father, George Dance (Snr) - also an architect and mason - that helped build the church. Little is known of John's activities in England at this time. He (John Caldecott) travelled to India in 1820 aboard the Mulgrave Castle, 460 tons, departing Gravesend 14 January 1821 and then via Madeira, Isle of France, The Cape, Ceylon and arrived in Bombay on 25th May 1821. He then began his employment as assistant to Daniel West at Apollo Cotton at Rs 200 per month plus £100 expenses. The West family was friends with the Caldecotts in London and had established a business in Bombay in 1909. One of the owners, William West - in 1815 - “began investigations in telescopes and microscopes as an evening amusement, a subject in which he took great interest ever after”. This was later to interest John Caldecott. For some years John travelled in India but with his home being mostly in Bombay working with Apollo Cotton. When the steeple of the Scottish Church in Bombay [St. Andrew’s Kirk, in Marine Street, which was built in 1818] was struck by lightning in 1826 it was Caldecott who organised and supervised repairs. On 8 November 1825 he married Selina Darby at this church. His marriage began to fall apart and on 21 December 1827 his wife returned to England. By 1828 John's salary from various employments was now £800 pa taking the Rupee as 1s 8d. In October 1828 he took a voyage down the coast to Travancore (now Kerala, Southern India), to visit his friend Humphrey Owen at a coffee plantation at Alwaye near Cochin. When he returned he resigned from Apollo Cotton on 1st March 1829 and by April had entered a partnership with Own under the title of Owen, Caldecott & Co. – formerly HF Owen & Co.

In August 1831 Caldecott was appointed Commercial Agent and Master Attendant at Alleppey as an employee of the Travancore Government in southern India. This was his first contact with the Church Missionary Society in southern India. He had met John Monroe, the former British Resident for Travancore and Cochin, at a CMS meeting while still in London (in about 1819). The erstwhile states of Travancore and Cochin have now been combined to form the modern state of Kerala. The minister at Cottayam (near Alleppey) Rev. Thomas Norton said “Mr Caldecott our new superintendent in place of Capt. Rorison called today. He manifested and expressed a strong desire to be on friendly terms. He appears to be agreeable. May God give him to receive the truth, and render him a blessing to the place”.

Caldecott had a small bungalow at Alwaye (about 13 km NE of Cochin) that he used in the very hot months from April to June. Here he built an observatory for his portable astronomical instruments. Caldecott shared an interest in astronomy, in which he was self-taught, with General Stuart Fraser, British government representative at Trivandrum, and through Fraser was introduced in 1832 to Swathi Tirunal [Rama Vurmah], Raja of Travancore. The Raja was a cultured man who had been educated in the English medium by various tutors and was fascinated by European scientific ideas. Caldecott would often instruct the Rajah's brother (Elija Thirunal) in chemistry during the Elija's student years. Swathi Tirunal had visited Alleppey and inspected Caldecott portable astronomical instruments. Caldecott suggested that a small observatory be built at Alleppey but the Raja offered him a position as astronomer at Trevandrum (Trivandrum) in a new observatory. Operations began using Caldecott's own portable but substantial instruments: namely -

While the observatory was under construction Caldecott and Taylor undertook a magnetic survey of southern India, through which the magnetic equator passed, using second-hand instruments from previous surveys. T. G. Taylor had been collecting magnetic data at Madras since 26 April 1837. He departed Madras on 23 July 1837 to meet Caldecott at Tranquebar on 2 August 1837 to begin the magnetic survey continuing into 1838. Taylor collected data at Tranquebar on 3 Aug alone, then is joined by Caldecott at Tranquebar where they make joint observations (7, 8, 9 Aug 1837), Negapatam (13 Aug), Manargoody (same day, 13 Aug), Sheally, Pondicherry, Negapatam (13 Aug with JC), Poothocottah, (14 Aug), Munanamelegoody (15 Aug), Kalehennary (16 Aug), Ramuad (17 Aug), Carryshandy (20 Aug), Vadinatum (21 Aug), Powani (22 Aug), Pallamcottah (23 Aug), Nagracoil (25 Aug), Trivandrum (28 Aug, 5,13 Sep). Caldecottt (alone) makes observations at Calicut (Nov 4), Penaney (Nov 5), Chetwaye (Nov 6), Bolghatty (Nov 8), Allepee (12, 13 Nov), Quilon (15 Nov), Trivandrum (20 Nov). There were some unsatisfactory outcomes of this survey due, in part, to defective instruments, but probably also to geological effects unrecognized at the time. At much inconvenience, Caldecott (alone) repeated his observations at Allepee and Cochin with a new needle (in a dip apparatus by T. Jones sent out to Madras from England), prior to his departure to Europe at Trivandrum, and made observations at the meteorological bungalow (15 Dec 1838); at Quilon in the Residency grounds in a mango tree 100 yds south of the house (15 Dec); at Allepee, in a thatched shed in Mr Anderson’s compound south of the house (20 Dec); and finally at Balghatty in the Residency compound in a tent (21 Dec).

- to procure apparatus from the leading makers: namely, a 5 foot transit instrument by Dolland - £180; a transit clock from Thomas Jones £400; two mural circles of 5 ft diameter from Troughton and Simms at £750 each; an astronomical clock from Dent for £60; a powerful reflecting telescope (not sure of the cost but between £150 to £2500); a powerful achromatic refracting telescope (between £150 to £2500); various other items. On his way to London from India he passed through the Red Sea and arrived in Jeddah in March 1839, intending to visit Mecca in disguise but the Mohammadan who has arranged to accompany him failed in courage at the last moment and would not go. He stopped in Cairo and measured the height of the grand pyramid

using Wollaston's Thermometrical Barometer as 458 feet. He travelled by steamboat

from Alexandria via Syra and then was quarantined in Athens for 10 days. He finally made it to London on 2nd August 1839.

While in London he became aware of plans for a worldwide network of magnetic observatories, and obtained the Raja’s consent to buy a set of magnetic instruments from Grubb of Dublin to match those being provided for the other British and East India Company observatories. On the 10th January 1840 he was Elected Fellow of Royal Astronomical Society and was present at the meeting with John Herschel in the chair. Proposers were Herschel, Bailey, Sabine, Beaufort, Lloyd. At the British Association for the Advancement of Science Annual Meeting at Glasgow in September he was present for a toast to Rajah of Travancore at the dinner on the last evening. Caldecott sailed from England in the autumn of 1840, pausing at Cadiz to visit the Spanish naval observatory at San Fernando, and then the Cairo observatory, reaching Trivandrum in April 1841

a few days after the arrival of the magnetic instruments which he had ordered. A magnetic and meteorological observatory was constructed that year and a new building for the 7 ft equatorial telescope went up in 1842. Taylor helped with the erection of the two mural circles.

Caldecott also corresponded with the Scottish scientist J. D. Forbes who was actively promoting experiments to measure deep-soil temperatures, following those made in France; he obtained from Adie of Edinburgh a set of thermometers 3, 6, and 12 French feet in length so that readings would be comparable with the French results. They were put into the ground near the observatory and the results, which were not extensive as one of the thermometers was soon broken, were communicated to the British Association. Though not officially part of the international magnetic observatories network, Caldecott assiduously met the same demanding schedule of observations, which he returned to Edward Sabine at the Royal Society. Isolated, overworked, and harassed by the ‘narrow-minded jealous fool of a Resident’—this was General Cullen, who had replaced the amiable former resident, Foster—and receiving no acknowledgement of his flow of observations and correspondence, he wrote bitterly to Sabine: "you have such little idea of all I have to contend with … to keep scientific matters going here, or I am sure you would be inclined to give me a helping hand … rather than a silence now maintained for 12 months since I first commenced operations". His reward was a batch of letters which had been delayed in transit, including one in which Sabine complained about the excess postage which Caldecott's observations had incurred. Caldecott was even more frustrated when the first abstracts published in England ignored the data from Trivandrum (which Sabine may well have considered less reliable than that from the nearby and official Madras observatory). Caldecott's father John Caldecott (Snr) died, aged 74 years in 1844. He spent 50 years at the Bank of England. His wife (Caldecott's mother) Susannah died 7 weeks earlier aged 63 years.

He went to England in 1846 to seek the help of some scientific society to publish his observations, but in vain. He returned to Travancore in 1847; the raja undertook to publish the data and Caldecott was preparing this when he was taken ill. In January 1849 he travelled to Bombay and into the hills, seeking relief. In October he suffered a seizure, recovered, but fell ill on 8 December and was found dead on the morning of 17 December 1849. He left instructions in his will that his wife Selina should be maintained for her lifetime; his effects were then sold, his estate, as he had requested, divided equally between his two brothers William and George. Caldecott's enthusiasm was no substitute for professional training. His results were never published. His successor at the observatory, John Allan Broun, found that the astronomical apparatus had not been properly installed, nor its errors determined. The Indian assistants, less than scrupulous about their observations in Broun's day, had probably grown lax during Caldecott's absences. Nevertheless, the observatory stands as a great monument to the inspired determination of Fraser, Caldecott and the Raja Swathi Tirunal - but also to those to follow in the same century - Broun and Mitchell.

Paradise in God's Own Country

Colonel John Munro
John Munro enlisted in the British Army in 1791. He fought in Sri Rangapattanam under Arthur Wellessley. He was a linguist and was also a Persian Translator. By 1806 he became the Quarter master General of Madras Army with the rank of Lieutanant Colonel. He was made the Resident of Travancore and Cochin. Munro was ruthless to root out corruption and crime, and was just and forgiving. Though he was a British Resident, as a Divan (Minister) of Travancore and Cochin, time and again, he argued against the British on behalf of the states. In due course, he was loved by the Rajas and Ranees as well as by the people.
History has recorded that Colonel John Munro was the greatest British Administrator of Travancore and Cochin in 150 years of British Dominion.
John Munro went back to his birth place in Teaninich, Ross Shire in Scotland and lived there until he died in 1858. His birth place is now a Tourist Resort.