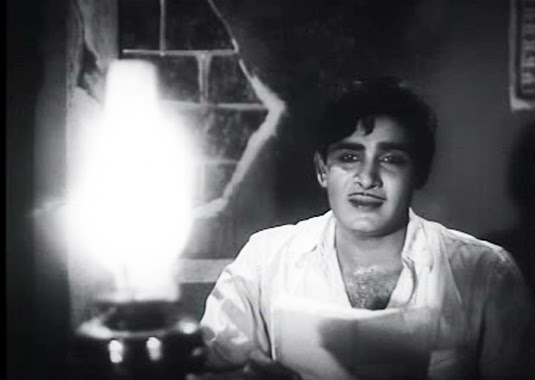 Though I had written in detail on the movie earlier, I know it’s never enough. ‘The Writer’ in Bhargavi Nilayam didn’t have a name which made it very, very interesting. As it had been rightly pointed out by many learned luminaries (KG George, for starters), the movie works at three levels on the viewer- its a murder mystery, a love story and a horror story that seamlessly flits across all the three without a hitch, and makes your revel in all the three, mutually inclusive and exclusive at the same time ! Can you ever think of an experience like that while watching a Malayalam film before ? I didn’t think the general audience of the time had, either.Though the full credit for ‘composing’ the narrative as this exquisite harmony should go to the creative inputs of A Vincent, Shobana Parameshwaran Nair into a script ‘almost’ built ground-up by the Beypore Sultan [ if you have read Neelavelicham, you would concur that it was at best the wireframe for the movie]. Madhu‘s character ( the Sultan by proxy) is a stark contrast to Prem Nazir‘s musician, and in a way portrays the essential nuances that set him apart in the world of Malayalam cinema, again. The mischievous glint in his eyes as he deals with the apparition, his latest muse is one of the unique nuances ever watched on screen. I think his soliloquy to Bhargavi, the borders on the fine line between an earnest plea for love as well as a genuine thirst to find out the truth, is the only instance, I have watched it come alive in Malayalam cinema. Bhargavi Nilayam is celluloid poetry in black & white. And Madhu is without doubt, its muse.