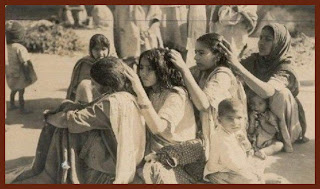 Nitpicking is the act of removing nits (the eggs of lice, generally head lice) from the host's hair. As the nits are cemented to individual hairs, they cannot be removed with most lice combs and, before modern chemical methods were invented, the only options were to shave all the host's hair or to pick them free one by one.

This is a slow and laborious process, as the root of each individual hair must be examined for infestation. It was largely abandoned as modern chemical methods became available; however, as lice populations can and do develop resistance, manual nitpicking is still often necessary.

As nitpicking inherently requires fastidious, meticulous attention to detail, the term has become appropriated to describe the practice of meticulously searching for minor, even trivial errors in detail (often referred to as "nits" as well), and then criticising them (see nitpicking (pastime))

THIS WAS THE ONLY TIME VILLAGE WOMEN COULD SIT AROUND AND PASS THE VILLAGE GOSSIP AROUND .[other times the women were criticized by mother in law/sister in law/or husband,if they were caught chit chatting and wasting time]

village women has to bring water from well/river;then cook and feed children , husband,/'s family ,bathe the children send them to school even walk with them to school for safety of the child ;etc etc etc.It was- and EVEN NOW- an unending thankless work