.  This Tamil Language inscription was found in China.   It was found about 500 miles north of Canton, in a place called Chuan Chou

Accounts of medieval travellers about chinese trade with india 1347

The characteristics of the Chinese ships of the period are described by Western travelers to the East, such as Ibn Battuta and Marco Polo. According to Ibn Battuta, who visited China in 1347:

…We stopped in the port of Calicut, in which there were at the time thirteen Chinese vessels, and disembarked. China Sea traveling is done in Chinese ships only, so we shall describe their arrangements. The Chinese vessels are of three kinds; large ships called chunks (junks),

and the small ones kakams.

The large ships have anything from twelve down to three sails, which are made of bamboo rods plaited into mats. They are never lowered, but turned according to the direction of the wind; at anchor they are left floating in the wind. Three smaller ones, the "half", the "third" and the "quarter", accompany each large vessel. These vessels are built in the towns of Zaytun and Sin-Kalan. The vessel has four decks and contains rooms, cabins, and saloons for merchants; a cabin has chambers and a lavatory, and can be locked by its occupants. This is the manner after which they are made; two (parallel) walls of very thick wooden (planking) are raised and across the space between them are placed very thick planks (the bulkheads) secured longitudinally and transversely by means of large nails, each three ellsin length. When these walls have thus been built the lower deck is fitted in and the ship is launched before the upper works are finished." (Ibn Battuta)

The first mentions of Chinese traders comes from Ceylon which was also a focal point of Arabic Red sea traders. Early mentions of far eastern sailors can also be found in ‘Cosmas Indicopleustes’ which was written around the 6th century and mentions goods from China. It is also known that Canton had Arab & Indian colonies at the port as early as 200AD. Trade existed between India and China as early as 2nd century AD, over Northern Pegu (Burma) but this was mainly overland. Maritime trade with Chinese ships started in the early decades of the 7th century first via Siam (Thailand). Nevertheless there are allusions to extensive trade which Coriander mariners conducted between the shores of Malabar, Coromandel ports,Ceylon, Indonesia and even Indo-China even before that. Documentation though is very difficult to come by.

Chinese shipping started roughly between the 9th and 12th centuries and touched the Malay, Indonesian and other Far Eastern ports. The lucrative trade was run directly by the Chinese monarchies. By the 12th century Chinese junks (square in shape and built like grain measures) seem to have started calling at Quilon. By the 12th century the Chinese compare themselves to Arab ships stating that while their ships housed several hundred men, the ones from the Arab side were much bigger and housed a thousand.Chau Jhu-kua, an inspector of foreign trade at the customs department in Quanzhou (Fukien – Fujian) a.k.a Zeytoun, then (Information collected from around 1211 and completed by 1225) documents (together with another man called Chou Ku Fei) for the first time whatever knowledge he has heard in the ports about the seas, the ports of call, the ships and the material traded. The second volume lists all the traded goods and their characteristics.
He describes Malabar:-
Malabar (Nan-pi)The Nan pi country is in the extreme south west. From San fo tsi, one may reach it with the monsoon in a little more than a month. The capital of the kingdom is styles Mie-a-mo (Malabar) which has the same expression as the Chinese expression Lissi.

The ruler of the country has his body draped, but goes barefooted. He wears a turban and loin cloth, both of white cotton cloth. Sometimes he wears a white cotton shirt with narrow sleeves. When going out he rides an elephant and wears a golden hat ornamented with pearls and gems. On his arm is fastened a band of gold, and around his leg is a golden chain.

Among his regalia is a standard of peacock feathers on a staff of vermillion color, over twenty men guard it round. He is attended by a guard of some five hundred picked foreign women chosen for their fine physiques. Those in front lead the way with dancing, their bodies draped, bare footed and with a cotton loin cloth. Those behind ride horses barebacked, they have a loincloth, their hair is done up and they wear necklaces of pearls and anklets of gold, their bodies are perfumed with camphor and mush and other drugs, and umbrellas of peacock feathers shield them from the sun.

In front of the dancing woman are carried the officers of the king’s train, seated in litters (bags) of white foreign cotton and which are called pu-toi-kiou and are borne on poles plated with gold and silver.In this kingdom there is much sandy soil, so when the king goes forth, they first send an officer with an hundred soldiers and more to sprinkle the ground so that the gusts of wind may not whirl up the dust.The people are very dainty in their diet; they have a hundred ways of cooking their food, which varies every day. 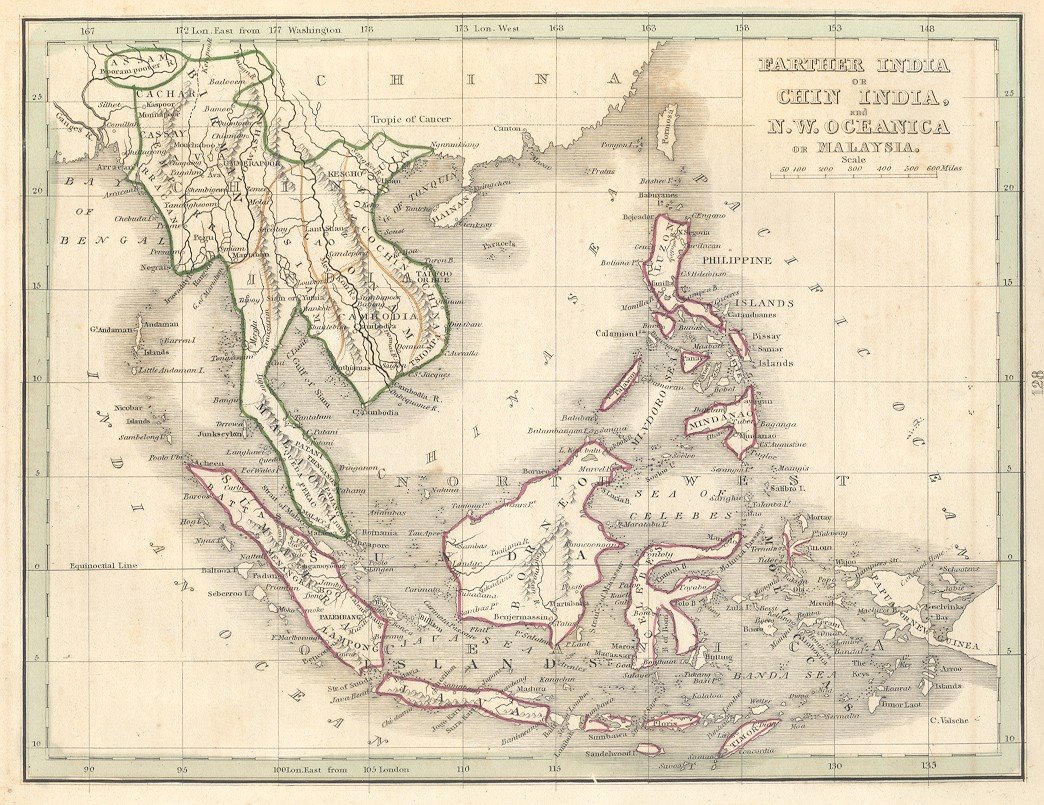 HOW THE CHINESE LEFT KERALA IN EARLY 16 TH CENTURY
Joseph the Indian, visiting Europe in the 16th century, accompanying Cabarl (Read the linked Cabral’s hostages) on his voyage back to Lisbon

Cathedral_of_Evora
states that the Moppilahs armed with the Zamorin’s backing destroys a Chinese settlement in Calicut over some trade dispute.
According to Jospeh, the Chinese left Calicut after this slaughter and after taking revenge on the people (late 14th century) finally shifting base to Mailapatam[MODERN MYLAPOUR?] under King Narasinga towards the sea of Cengala (also recreating dwellings and scenery like Calicut – De Barros) and leaving behind only a colony of half castes
WHO WAS THIS KING NARSINGA? 
Kochi Royal Family has a strong history, which is least known to modern generations. Yet, the most interesting lot is the fact, the dynasty has been claiming itself as one of the largest Royal family in the world, with more than 1000 members spread around 600 families.

Due to this extreme large size of the family, unlike any other royal families, adoptions were unheard in the system

Its believed, the last Chera Emperor, before his conversion to Islam, partioned the empire between his sons, nephews and relatives. Though the second line of Cheras followed Materillinal system, much of the land was given to the Emperor's sons

It was in context, the Emperor's sister was married to a Nampoothiri (Malayalee Brahmin), in Perumpadappu in Malappuram district, complained against Emperor's partiality to his sons

The Emperor immedidately rectified his mistake, by granting his capital and large portions of middle stretch of his empire to his's sister's grandson and awarded him the right of being called Koviladhikari. The title is of high importance, as it was the most powerful religious title held by the Chera Emperor. The other 2 titles- Kulashekara was granted to his son and Rakshapurshan to his another nephew.

The dynasty formed by his son became Venad Royal House (later Travancore), by his nephew being Valluvanadu Royal House (Palakkad)

The title of Koviladhikari, helped Kochi Kings, becoming the spiritual head of entire Namboothiri system of Kerala. His decision over spiritual cases became final and followed rigidly in the state

There are 11 branches or 11 thavazhis in the Royal family, each being headed by a senior lady known as Amma Thampurans. However only 5 thavazhis or Dynasty has real right of succession, though in few instances from other dynasties have interfered. The 5 main Thavazhis are Mootha Thavazhi, Elaya Thavazhi, Mrungoor Thavazhi, Palluruthi Thavazhi, Chaziyoor Thavazhi. The other minor Thavazhis are Aroor, Cherai, Vettathur are well known and rest are sub branches of existing.

Unlike elsewhere in Kerala, in Kochi, all royal ladies are addressed as Thampurans, with no distinction of gender.

The senior most lady among the 5 princess holds the key of succession and hence known asPenvazhithampuran or Veliyathampuran, thus becomes the official head of the family. Her position was almost similar to a Governor in modern system. She has the power to appoint any of her brothers as the King of Kochi and the duration of each King can be decided by her.

As a convention, the seniormost male member known as Moopil, would become the King, when Penvazhithampuran decides for it. For her decision, the Moopil agrees to pay her, a sum of 201 gold coins and her maintenance charges. Normally the Moopil, who posses the best royal skills, coupled by astrological predications and closer relationship of Penvazhithampuran makes to the Crown.

However in history, there were instances, when the Penvazhithampuran dies and new lady assumes the charge, changing the King to her brother. This system was in force untill 1804, after which the tradition merely became a ritual, as it was British who decides among the Kochi Princes to become the king while the Queen simply signs the declaration order.

A lady can choose the king only from her natural brothers or first order cousin brothers. She can't choose any second order cousins (born to her's mother's brothers) as King.

Its due to this unique system, adoption became scare or unheard in the royal family, as there are n number of sisters and brother combinations for final decision. However adoptions do happen within the Thavazhis/dynasties to maintain the chances of succession.

The King can marry any number of wives, while the senior most is called as Neythar Amma, Unlike Travancore, Neythar Ammas can live with the King, in his Palace and enjoy all comforts as a Royal consort. While the Queen of Kochi, The Penvazhithampuran can't live with the King's residence and has to live in her designated palace alone.

Under the Kochi system, the Neyathar Ammas can interfer in the administration and support the king in day to day administration, while the real queen Penvazhithampuran can't issue orders or interfer in the system, except in finalizing the duration of the King's reign. She gains absolute, unquestionable powers, even to displace the King and government. However rarely this power has been used in the family.

In Kochi, the dynasty is a hetro-mix of Namboothiris, Samantha Kshatriyas and even Nair castes (like Thirumalpadus). Hence the prince, who is in line of succession, carries out certain rituals, to become Samantha Kshatriya at an age of 6 and gets into the caste system.

The Kochi King, is political head of all Brahmin castes of Kerala. He is the only one eligble to sit and dine along with Brahmins as well as decides the purity of casteism of Brahmins in Kerala.

Hence the tradition forces the Kochi princes in line of succession to be well versed in all Hindu Upanishads, Vedas and other scriptures.

The naming cermony is done, in consideration of reigning Penvazhithampuran. The more closest relation, the better chances of succession.

Normally the most likely to be succeed is named as Goda Varma, while rest being named either Rama Varma or Kerala Varma or Ravi Varma

Since there is no official titles for the King in the Kochi, each King is known after a nickname, either Posthumously or Pre-humously. It can vary according the nature of the prince, his interests, his abilities etc. The official title will be always Valiyathampuran Maharaja, irrespective of the name.
__________________