story of the richest-king midas and his golden touch

Midas was the king of Pessinus, capital of Phrygia, a region in Asia Minor. He was the adopted son of Gordias and Cybele and was well known for his pristine rose garden and love of the pleasures of life.

King Midas and the Golden Touch

Many years ago there lived a king named Midas.

King Midas had one little daughter, whose name was Marigold.

King Midas was very, very rich. It was said that he had more gold than any other king in the world.

One room of his great castle was almost filled with yellow gold pieces.

At last the King grew so fond of his gold that he loved it better than anything else in all the world.

He even loved it better than his own little daughter, dear little rosy-cheeked Marigold. His one great wish seemed to be for more and more gold.

One day while he was in his gold room counting his money, a beautiful fairy boy stood before him.

The boy's face shone with a wonderful light, and he had wings on his cap and wings on his feet. In his hand he carried a strange-looking wand, and the wand also had wings.

"Midas, you are the richest man in the world," said the fairy. "There is no King who has so much gold as you."

"That may be," said the King. "As you see, I have this room full of gold, but I should like much more; for gold is the best and the most wonderful thing in the world."

"Are you sure?" asked the fairy.

"I am very sure," answered the King.

"If I should grant you one wish," said the fairy, "would you ask for more gold?"

"If I could have but one wish," said the King, "I would ask that everything I touch should turn to beautiful yellow gold."

"Your wish shall be granted," said the fairy. "At sunrise to-morrow morning your slightest touch will turn everything into gold. But I warn you that your gift will not make you happy."

"I will take the risk," said the King.

The next day King Midas awoke very early. He was eager to see if the fairy's promise had come true.

As soon as the sun arose he tried the gift by touching the bed lightly with his hand.


The bed turned to gold.

He touched the chair and table.

Upon the instant they were turned to solid gold.

The King was wild with joy.

He ran around the room, touching everything he could see. His magic gift turned all to shining, yellow gold.

The King soon felt hungry and went down to eat his breakfast. Now a strange thing happened. When he raised a glass of clear cold water to drink, it became solid gold.

Not a drop of water could pass his lips.

The bread turned to gold under his fingers.

The meat was hard, and yellow, and shiny.

Not a thing could he get to eat.

His little daughter came running in from the garden.

Of all living creatures she was the dearest to him.

He touched her with his lips.

At once the little girl was changed to a golden statue. 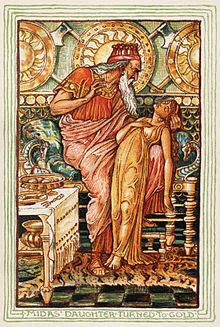 Midas's daughter turns to a statue when he touches her
A great fear crept into the King's heart, sweeping all the joy out of his life.

In his grief he called and called upon the fairy who had given him the gift of the golden touch.

"O fairy," he begged, "take away this horrible golden gift! Take all my lands. Take all my gold. Take everything, only give me back my little daughter."

In a moment the beautiful fairy was standing before him.

"Do you still think that gold is the greatest thing in the world?" asked the fairy.

"No! no!" cried the King. "I hate the very sight of the yellow stuff."

"Are you sure that you no longer wish the golden touch?" asked the fairy.

"I have learned my lesson," said the King. "I no longer think gold the greatest thing in the world."

"Very well," said the fairy, "take this pitcher to the spring in the garden and fill it with water. Then sprinkle those things which you have touched and turned to gold."

The King took the pitcher and rushed to the spring. Running back he first sprinkled the head of his dear little girl. Instantly she became his own darling Marigold again, and gave him a kiss.

The King sprinkled the golden food, and to his great joy it turned back to real bread and real butter.

Then he and his little daughter sat down to breakfast. How good the cold water tasted! How eagerly the hungry King ate the bread and butter, the meat, and all the good food!

The King hated his golden touch so much that he sprinkled even the chairs and the tables and everything else that the fairy's gift had turned to gold.

This myth is ethiological since it explains why the Pactolus River is rich with gold and how Lydia came to be one of the richest kingdoms. It is also carries a common motif in Greek folklore – the "short-sighted wish". Midas let his greed blind him to the future.

After the death of his daughter, Midas hated wealth and splendor and became a worshiper of Pan, god of woodlands. In another myth, Pan challenged Apollo, god of the music, to a test of skill at music. Tmolus, god of the mountain, was the judge at the contest and ruled that Apollo was the victor. Midas, being a follower of Pan, questioned the ruling and this offended Apollo. As a punishment for Midas' lack of musical "taste", Apollo changed Midas' ears into donkey ears. Ashamed of his disfigurement, he hid his ears under a large hat with only his barber knowing about the deformity. It was so hard for the barber to keep the secret that he dug a hole, whispered the secret into the hole, then covered it with earth. From this spot grew reeds that whispered, "Midas has donkey ears!" every time the wind blew. Another version has the queen letting out the secret. In the end, Midas ran away from Phrygia never to be heard from again. 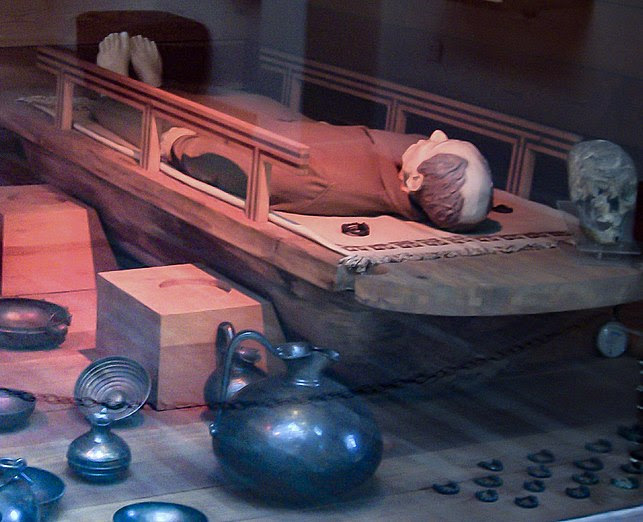 In 1957, Rodney Young and a team from the University of Pennsylvania[ opened a chamber tomb at the heart of the Great Tumulus (in Greek, Μεγάλη Τούμπα) – 53 meters in height, about 300 meters in diameter – on the site of ancient Gordion (modern Yassihöyük, Turkey), where there are more than 100 tumuli of different sizes and from different periods. They discovered a royal burial, its timbers recently dated as cut to about 740 BC[ complete with remains of the funeral feast and "the best collection of Iron Age drinking vessels ever uncovered". This inner chamber was rather large; 5.15 meters by 6.2 meters in breadth and 3.25 meters high. On the remains of a wooden coffin in the northwest corner of the tomb lay a skeleton of a man 1.59 meters in height and about 60 years old. In the tomb were found an ornate inlaid table, two inlaid serving stands, and eight other tables, as well as bronze and pottery vessels and bronze fibulae Although no identifying texts were originally associated with the site, it was called Tumulus MM (for "Midas Mound") by the excavator. As this funerary monument was erected before the traditional date given for the death of King Midas in the early 7th century BC, it is now generally thought to have covered the burial of his father.

THE BURIAL MOUND OF KING MIDAS -at Gordion, Turkey 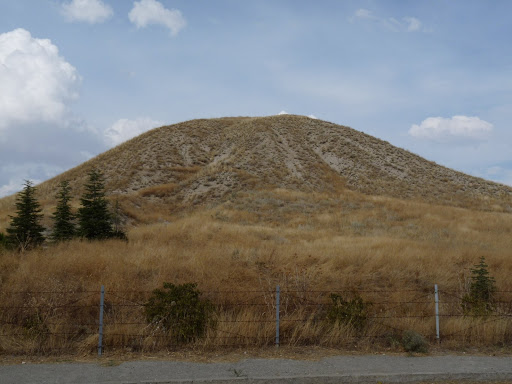 Around 800 BC the Phrygians (former Vryges or Vrigi) expelled by Macedonians, abandoned their eternal homeland and capitalEdessa, seeking refuge in western Asia Minor. In modern terms it was a genocide impaired by invading barbarians. In Anatolia they established a neo-Phrygian kingdom with Gordion city as capital, in  vast lands of collapsed Hittite empire.

hot springs at Apameia, called Sidja by the Turks. Another pictorial type shows Adrasteia nursing the infant Zeus and surrounded by the three Kuretes

Back in Balkans the Makestes or Maketes or Makedni (later Makedonians) established their own kingdom in former Brigian (Phrygian) lands having Aegae city (former Phrygian Vedyssa, present day Edessa) as capital. The name of new kingdom was Imathia (A word of  Illyrian origin) that  was renamed  to Macedon or Macedonia  after its expansion. It lasted  seven centuries until 168 BC when  it was conquered by Romans who annexed it as  Roman province. On 9th c. AD the region of ancient Thrace was renamed  Macedonia by Romans distorting the eternal meaning of this ethno-geographic term.

WEST OF ANKARA:  MEMORIES OF  GLORIOUS PAST

676 BC:  A BARBARIAN INVASION EXTERMINATES  THE NEO-PHRYGIAN  KINGDOM IN ANATOLIA

The neo-Phrygian kingdom in western Anatolia survived from 9th c.  till 676 BC when  was  destroyed after   invasion of Cimmerian. Last king Midas II commited suicide drinking the blood of a bull and the new capital Gordion city located west of modern Ankara, was looted and burned to ashes   by barbarian invaders.

The old tragedy that occured 300 years ago in Balkans was repeated again. Midas prehistoric kingdom came to final end. However the spirit of Phrygian civilization survived forever. In Persian, Romam, Byzantine and Ottoman eras Provincia Phrygiaconstituted a distinct part of these multinational empires. 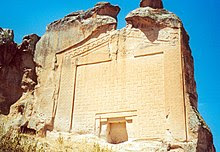 Phrygians invented a civilization  of gold and stone, a realistic aspect of life and prosperity, similar to eternal people'sdreams  for  wealth, glory and immortality.