INDIA FIGHTS FOR INDEPENDENCE;AND HISTORY OF INDIAN FLAG;India’s flag is a tricolor standard, with bands of saffron, white, and dark green. The saffron represents courage, sacrifice, patriotism, and renunciation. It is also the color of the Hindu people. The green stands for faith, fertility and the land; it is the color of the Islam religion. The white is in the center, symbolizing the hope for unity and peace. In the center of the white band is a blue wheel with 24 spokes. This is the Ashoka Chakra (or “Wheel of Law”). The Chakra represents the continuing progress of the nation and the importance of justice in life. It also appears on the Sarnath Lion Capital of Ashoka “


Sep 24, 2016 - On August 22, 1907, Madam Bhikaji Cama became the first person to hoist Indian flag on foreign soil in Stuttgart in Germany. ... On August 21, 1907, an International Socialist Conference was being held at Stuttgart, a city in Germany. .... a Priyadarshini-class fast patrol vessel named the ICGS Bhikaji Cama.

IN 1917…..
The Home Rule Bal Ganga Dhar Tilak adopted a new flag in 1917. The flag had union jack at the top, near hoist. The rest of the flag contains five red and four green strips.
It had seven stars on it in the shape of “Saptarishi” Constellation which is sacred one for Hindus. It also had a crescent moon, star at the top fly end. This flag didn’t become popular in masses.

IN 1921…..As Mahatma Gandhi communities of India to be represented in the flag of the nation, so a new flag was designed. At the top was white then green and at the bottom was red color. In this flag white symbolized minority communities of India, green was for Muslims and the red one was for Hindu and Sikh communities. The “Charkha” was drawn across all the bands symbolizing the unification of these communities. IN 1931……Some people were not at all happy with the communal interpretation of the flag. Keeping all this in a view a new flag was designed. This color signified combined spirit of Hindu yogis as well as Muslim dervish. In another flag by Pingali Venkayya had three color. Saffron was at the top Followed by white in the middle and green being the lowermost. The “Charkha” was at the center of white color. This flag was passed at the meeting of Congress Committee in 1931 and was adopted as the official flag of the Committee. 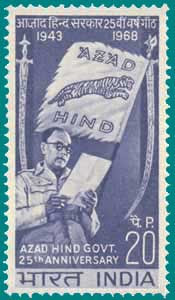 When India got independence, a committee headed by Rajinder Prasad was formed to discuss the National Flag of India and they decided to adopt the flag of Indian National Congress with suitable modifications as the flag of India. As a result the flag of 1931 was adopted as Indian flag but “Charkha” in the middle was replaced by “Chakra” (wheel) and hence our national Flag came into being. The Indian National Flag came into being in its present form at the meeting of Constitutional Assembly on 22nd July 1947.

July 1947, he said,  “ … this flag that I have the honour to present you is not, I hope and trust, a flag of the dominion over anybody, but a flag of freedom not only for ourselves, but a symbol of freedom for all people who may see it. And wherever it may go – and I hope it will go far- not only where Indians dwell as our ambassadors and ministers but across the far seas where it may be carried by the Indian ships, wherever it may go, it will bring a message of  comradeship, a message that India wants to be friend with every country of the world and India wants to help any people who seek freedom. That hope will be the message of this flag everywhere…”.see below 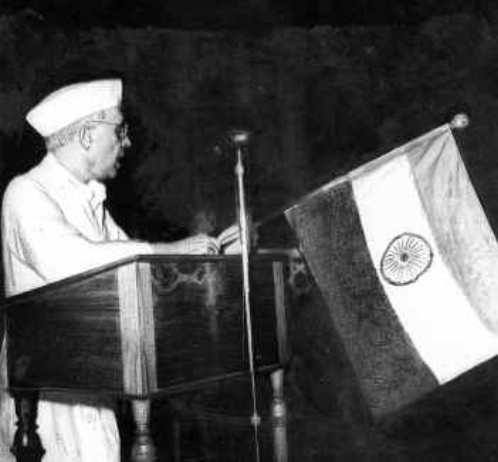 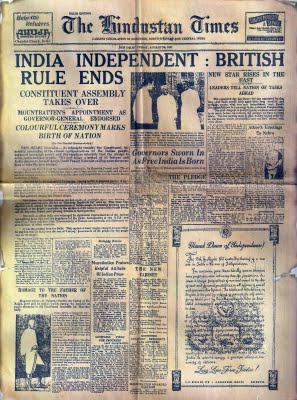 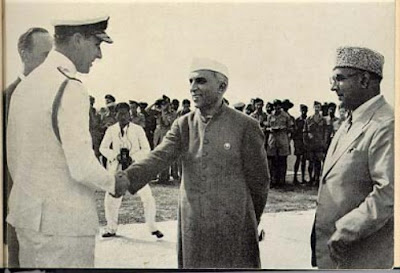 Mountbatten swears Jawaharlal Nehru in as Prime Minister of India on August 15, 1947. 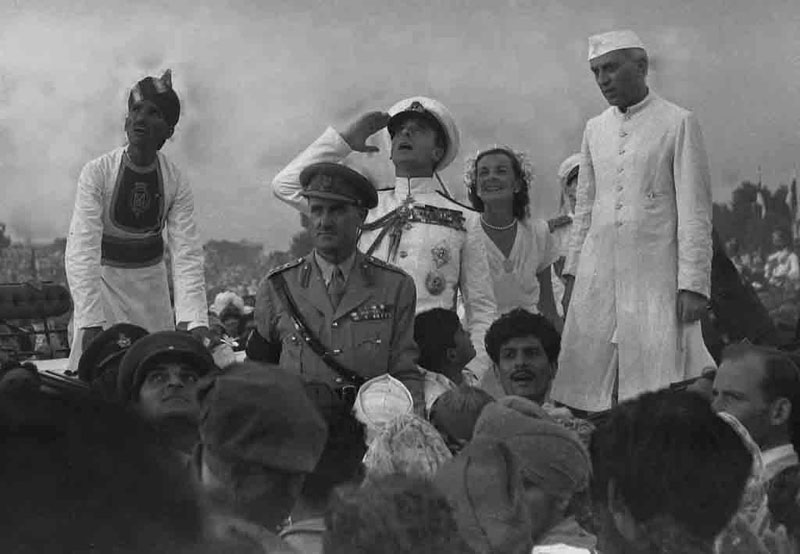 [Red Ensign was established as the proper colours for the British ships by a proclamation in 1674. The Merchant Shipping Act of 1894 brought up to date the law concerning the wearing of ensigns by British ships. Prior to this many ensigns of various designs were in use.] 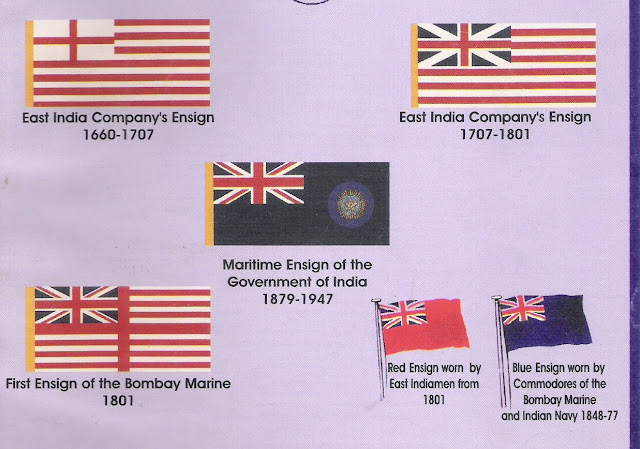 The new Purna Swaraj Flag immediately acquired irresistible power, it betokened fearlessness and faith amongst the Freedom fighters in their ultimate victory in gaining Independence in 1947.

The Patriotic cover shows the effigy of Mahatma Gandhiflanked by the new Tricolour flags and the legend ‘Vande Mataram’ in Tamil.The envelope is chopped with Japanese censored mark and was postally carried in Malaya then under Japanese occupation during World War II (Postage stamps were duly affixed at the back) 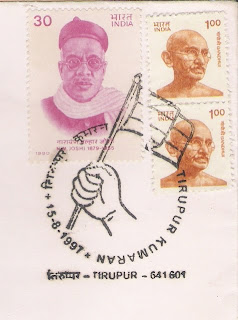 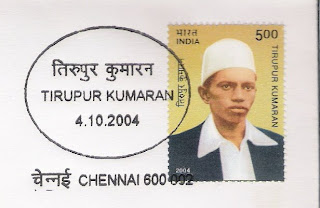 Kodi Kaatha Kumaran (1904 - 1932)
Kumaran - The protector of the Flag, on January 10, 1932, Kodi Kaatha Kumaran, a brave young mill-hand of Tirupur, Madras (now Tamil Nadu) was leading a labour resistance procession holding the tricolour in his hand, when police attacked Kumaran brutally he exhibited an exemplary act of defiance against the British violence by holding the Tricolourup while raising the freedom cry ‘Vande Matarm’. Kumaran succumbed to his  injuries next day. 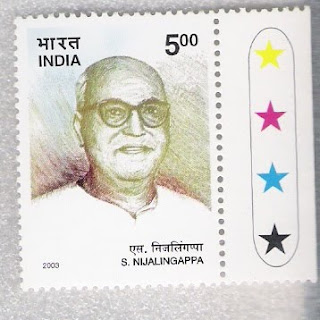 Sanjiva Nijalingappa actively participated and courted arrest in the 'Flag Satyagraha' organised by the Mysore Congress in April 1938 at Shivapura near Maddur, Karnataka. 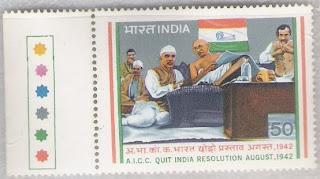 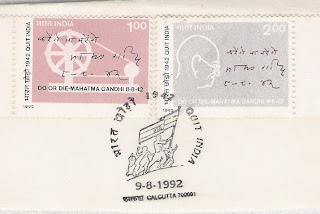 On August 8, 1942 Mahatma Gandhi gave the historic call “Quit India” in Bombay and raised the slogan “Do or Die” for the cause. 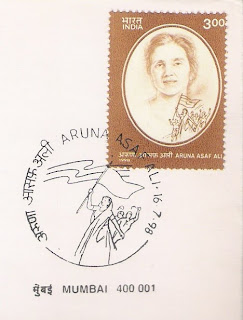 On August 9, following the arrest of most of the prominent leaders, Aruna Asaf Ali came forward and hoisted the National Flag at Gowalia Tank Maidan (Renamed, August Kranti Maidan) in Bombay (now Mumbai).

Matangini Hazra was an active participant of the Quit India Movement at the age of 73. On 29th. Sept, 1942 while she was leading a procession in Tamluk, Bengal and advanced with the Tricolour flag in her hands, a shower of bullets from the police felled her, but the flag was still flying in her hands unsullied. 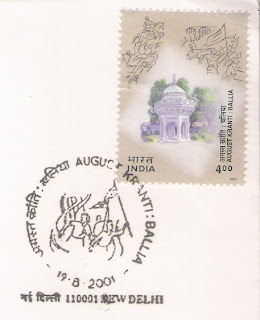 The August Kranti at Ballia,under the leadership of Chittu Pandey was an inspiring chapter of the “Quit India” Movement 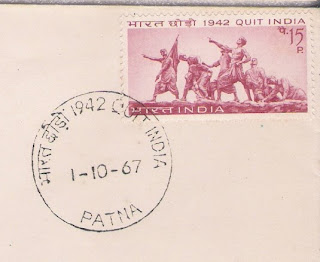 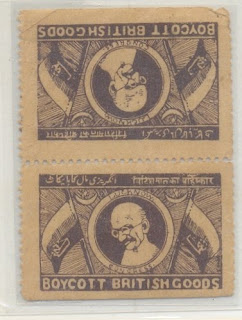 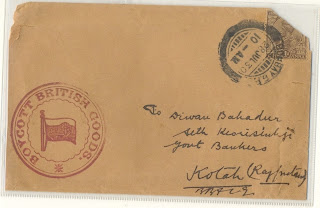 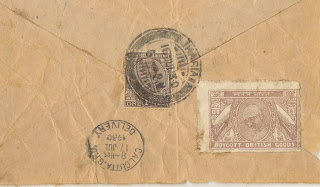 
The Flag Committee -1931 headed by Dr. Pattabhi Sitaramyya after going through various suggestions as received from various sources came up with an entirely new design, allSaffron Flag charged with a brown Charkha at

the top left corner (canton) of the flag. The Flag design recommended by the Flag Committee failed to create any consensus amongst the Congress members in general and Muslims members in particular. The proposed flag was summarily rejected by the Congress Working Committee for the reason that the flag design interfered too much with the flag. As a result the all Saffron Flag never saw the light of day.