This is the first of three or maybe four posts presenting scans (by me) from 'The Treasury of Ornament' by Heinrich Dolmetsch, first published as 'Der Ornamentenschatz' by Verlag von Julius Hoffman in Stuttgart in 1887.

The Treasury of Ornament 1 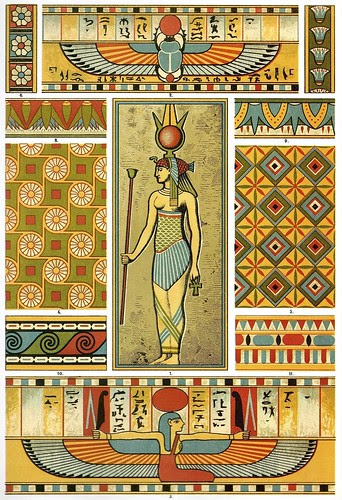 Egyptian Painting and Plastic Art
Relief figures, paintings and borders from a sarcophagus and temple columns 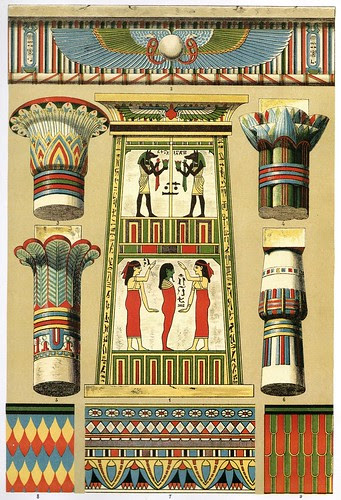 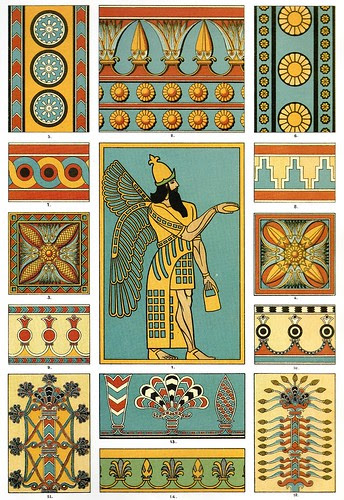 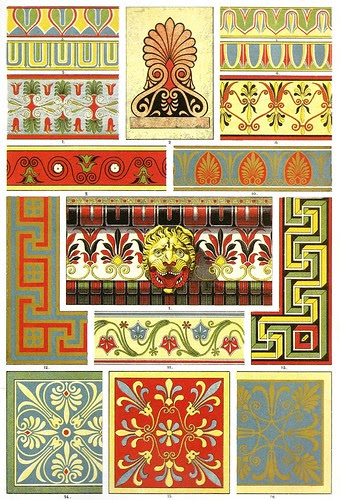 Greek Polychrome Architecture
Friezes, cassette panels, cornices and painted ornament from Selinus, Propylaea and the temple of Nike Apteros and other sites in Athens 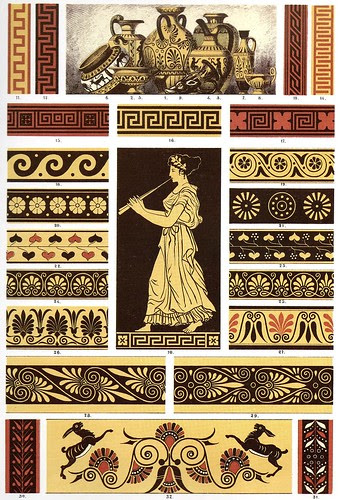 Greek Pottery
Wine amphora, drinking vessels and vases. "The oldest Greek vases are the most simply decorated; on a light ground colour of clay bands, circles, squares etc. used to be painted. But soon they appear also with friezes, decorated with figures of animals. [..] Subsequently figural representations appear between bands: undulating lines, heart-shapes and laurel leaves, meanders etc. [..] In the zenith of Greek ceramique art the colouring of the ground and of the ornamental and figural representations underwent a change. The orange colour of the clay was spared, the bacground filled with black. The figures, drawn with the brush, show much firmness and a noble elegance." {this snip gives a rough indication of the translational quality, such as it is, of the book} 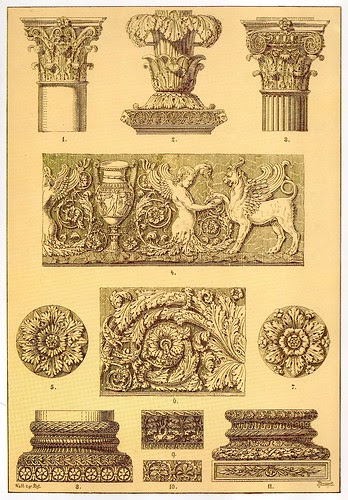 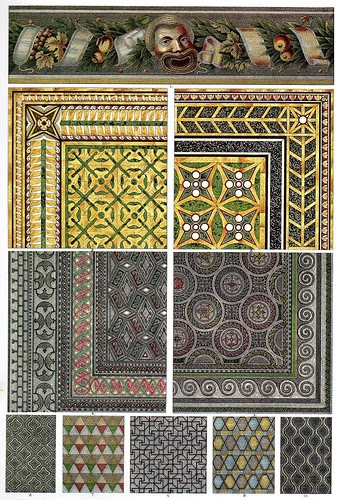 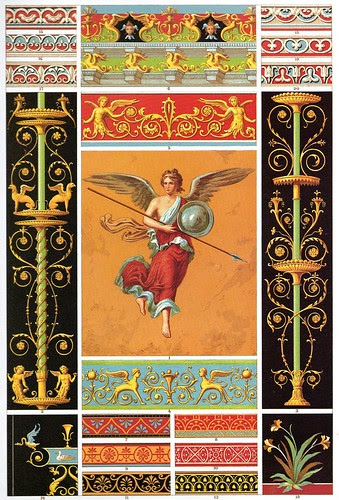 Pompeian Wallpainting and Polychrome Basso Relievos
The wallpaintings found at Pompeii, Herculaneum and Stabiae (and Rome) are probably reproductions of originals - now lost - by the Greek masters 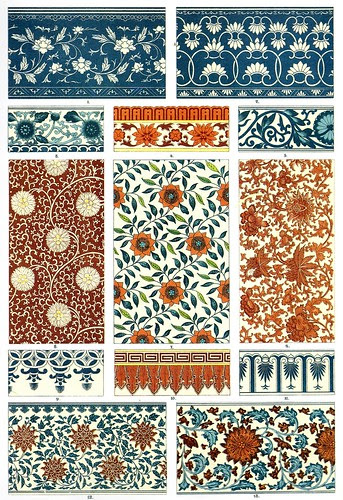 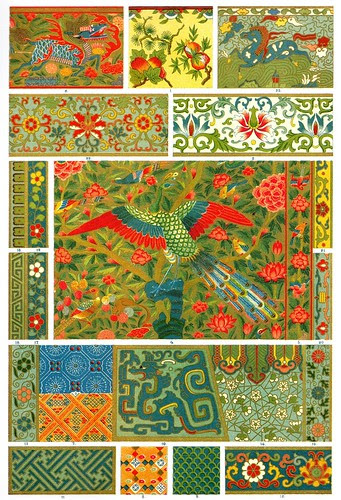 Chinese Painting Weaving Embroidery and Email Cloisonné*
Vases, bowls, wooden chest and curtain designs (cloisonné is a technique where outlines of the scenes are formed by soldered metal borders and enamelling takes place within each resulting 'cell') 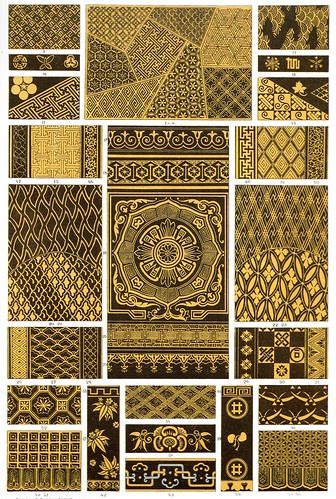 Japan Lacker Painting [sic]
Where Chinese lacquer ware designs are dominated by scenes from nature, the Japanese art more often employs geometric patterns. The most precious papier-mâché and wooden objects have up to twenty coats of lacquer applied, often with reapplication of the design in gold paint (gilding) in between each layer of lacquer, resulting in a 'relief' appearance 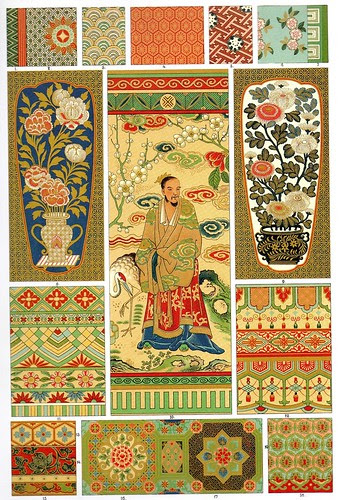 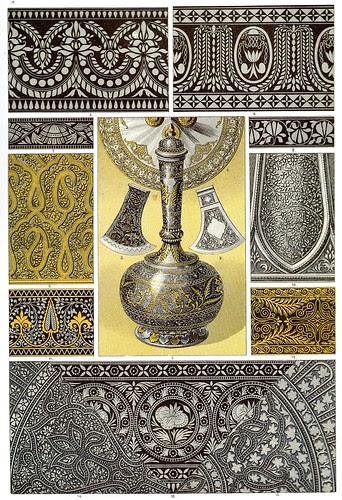 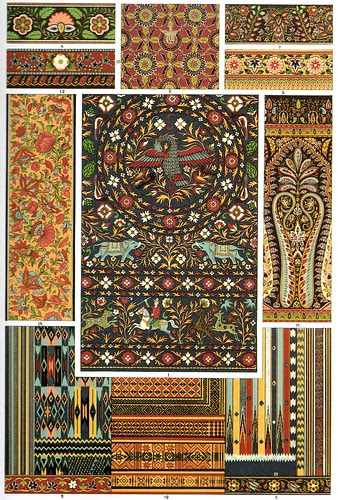 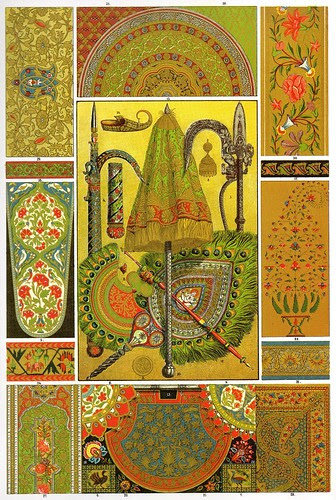 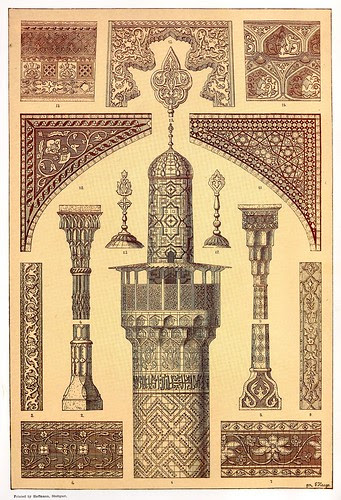 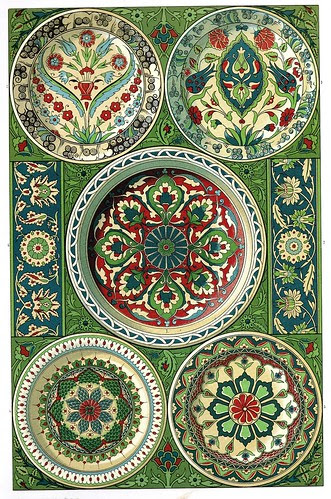 Persian Pottery
Fayence (tin-glazed) plates and wall wainscot borders. "Both the invariably flat treatment of the ornament and the prevalence of the natural imitation of flowers constitute the characteristic style of Persian decoration."

This is the first of three or maybe four posts presenting scans (by me) from 'The Treasury of Ornament' by Heinrich Dolmetsch, first published as 'Der Ornamentenschatz' by Verlag von Julius Hoffman in Stuttgart in 1887.