The structure of the temples in Kerala is distinctive. The roofs are steep and pointed, and covered with copper sheets. The Kerala roof resembles those found in the Himalayan regions and those in East Asia.

The shape of the roof is in accordance with the plan of the sanctum below. With a circular plan, one sees a conical roof, while with a square plan the roof is pyramidal. The roof is constructed with wood and is covered with copper plates. Most of the temples seen in Kerala today, have undergone several phases of renovation, given the perishable nature of the construction materials.
The central sanctum of a Keralite temple is referred to as the Sree Kovil. It is surrounded by a cloistered prakara, pierced at one or more cardinal points with a gopuradwara. The cloistered prakaram has a namaskara mandapam located directly in front of the sanctum. This prakaram also houses subsidiary shrines. A kitchen is located in the south eastern corner of ths cloistered prakaram.   The mukha mandapam is integrated with the gopura entrance. The flagstaff or dwaja stambham is located outside of the dwajastambham. The balipitham may be located in the mukhamandapam or in the outer courtyard. The outer prakaram or courtyard houses other subshrines, and optionally a temple tank.
Chennamath Temple

This old Siva temple has circular vimana. It is ekathala alpavimana. It is of sandhara type. Two armed dwarapalakas in stone work is seen here on the flanks of the main door entrance.

Uliyannur Mahadeva Temple
This structural temple is in the form of vritha vimana with granite adhisthana. A unified tiled roof for the whole temple.

Vishnu Temple Aruvikara
Vishnu Temple at Aruvikara is of circular vimana with granite adhistana and plastered wall. The whole structure is recently renovated. 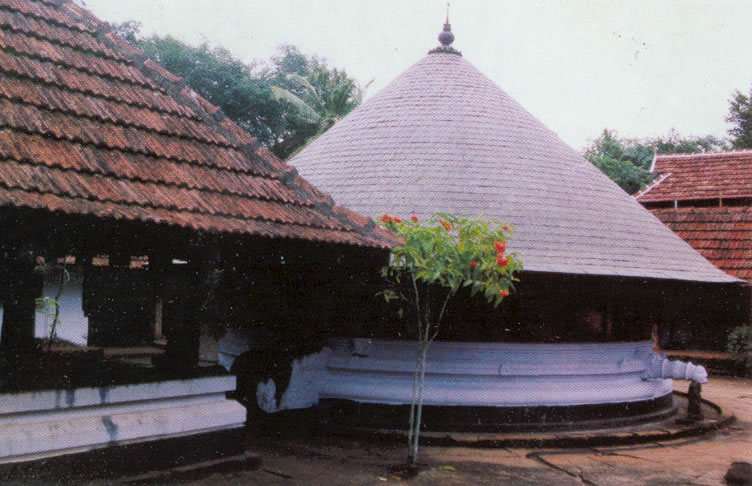 
this structural temple can be datable to 12-13thh century A.D. It is of circular vimana with granite stone plinth with plastered walls bearing beautiful

This structural temple can be datable to 12-13thh century A.D. It is of circular vimana with granite stone plinth with plastered walls bearing beautiful mural paintings. They include various puranic scenes like Gajendra moksha, Sivathandava, Sastha on hunting, Sreerama Pattabhisheka, the war between Rama & Ravana etc. Main deity is Narasimha moorthy facing east. pranala of the ornate medieval type. Dwarapalakas are painted on the wall. Square ardha mandapa carries beautiful carvings on the wooden ceiling.
Considering the structural and mural importance, the temple was declared as protected monument in 1996. 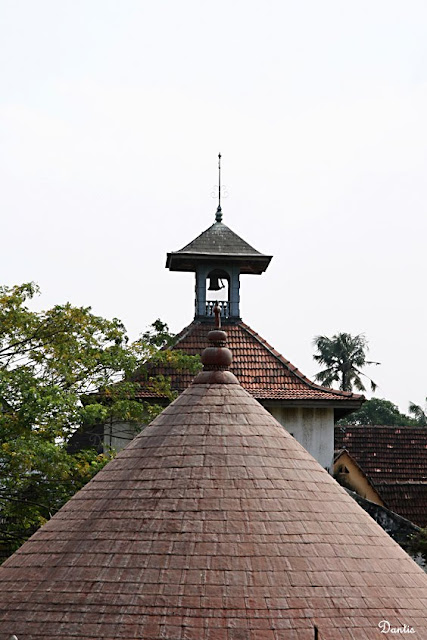