The silver tree at Karakorum- 1250-[Study of Karakorum by Scholars]

Mongke and his brothers[GRAND CHILDREN OF GENGHIS KHAN] ruled over an immense empire that was symbolized by a Silver Tree with four serpents that provided drinks-airak (fermented mare's milk) for the Mongolian north, mead from honey for the European west, grape wine for the south, and rice wine for the east.

MONGOL EMPIRE -1250-[JAPAN IN EAST TO GERMANY IN WEST] 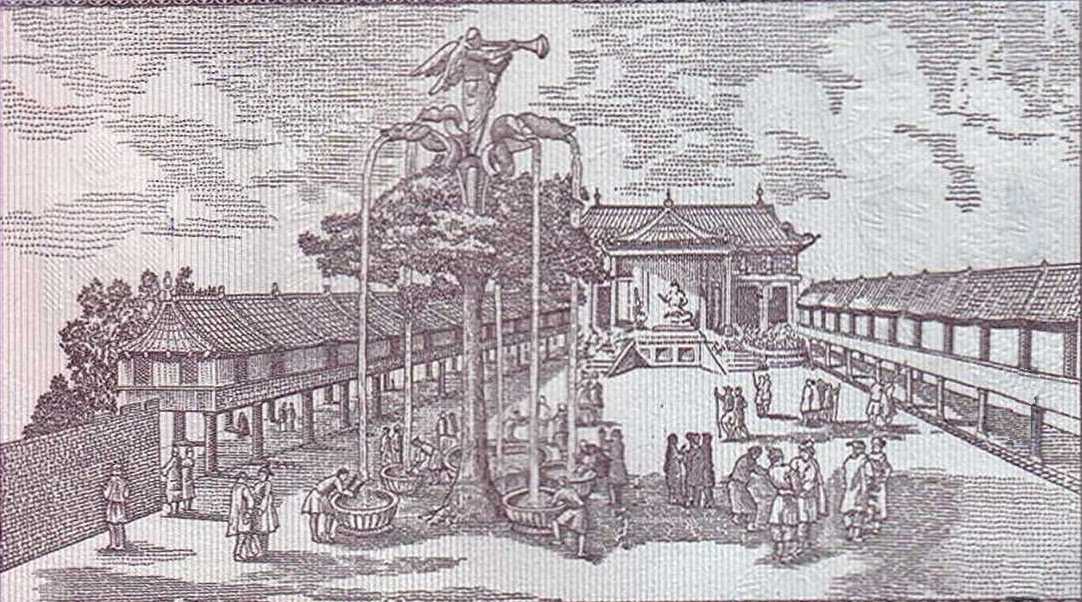 William of Rubruck, a Flemish Franciscan missionary and papal envoy to the Mongols reached Karakorum in 1254. He has left one of the most detailed, though not always flattering, accounts of the city. He compared it rather unfavourably to the village of Saint-Denis near Paris, and was of the opinion that the royal abbey there was ten times as important as the Khan's palace. On the other hand, he also described the town as a very cosmopolitan and religiously tolerant place, and the silver tree he described as part of Möngke Khan's palace has become the symbol of Karakorum.[4] He described the walled city as having four gates facing the four directions, two quarters of fixed houses, one for the "Saracenes" and one for the "Cathai", twelve pagan temples, two mosques, as well as a Nestorian church.[3] 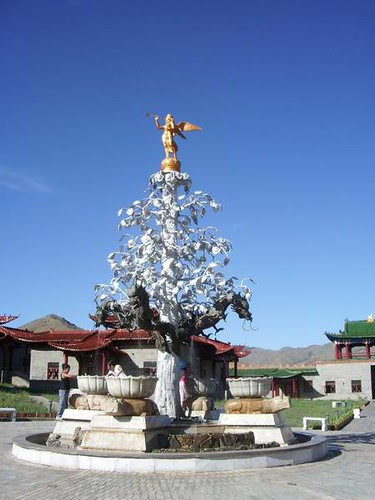 Silver treeA replica of the silver tree fountain at the old capital of Karakorum. This one's in the grounds of a hotel. 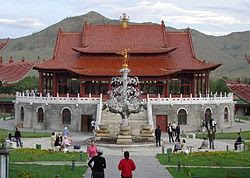 The Silver Tree Fountain of Karakorum (modern reconstruction)
A number of historical documents make mention of one of the architectural wonders of Karakorum–the famous "silver tree" fountain designed by French artisan Guillaume Boucher for the Great Xaan, and located within the court of his royal palace. In the words of William of Rubruck:

At the entrance to this palace, seeing it would have been unseemly to put skins of milk and other drinks there, Master William of Paris has made for him a large silver tree, at the foot of which are four silver lions each having a pipe and all belching forth white mares” milk. Inside the trunk four pipes lead up to the top of the tree and the ends of the pipes are bent downwards and over each of them is a gilded serpent, the tail of which twines round the trunk of the tree. One of these pipes pours out wine, another caracosmos [ airag ], that is the refined milk of mares, another boal, which is a honey drink, and another rice mead, which is called terracina. Each of these has its silver basin ready to receive it at the foot of the tree between the other four pipes. At the very top he fashioned an angel holding a trumpet; underneath the tree he made a crypt in which a man can be secreted, and a pipe goes up to the angel through the middle of the heart of the tree. At first he had made bellows but they did not give enough wind. Outside the palace there is a chamber in which the drinks are stored, and servants stand there ready to pour them out when they hear the angel sounding the trumpet. The tree has branches, leaves and fruit of silver. And so when the drinks are getting low the chief butler calls out to the angel to sound his trumpet. Then, hearing this, the man who is hidden in the crypt blows the pipe going up to the angel with all his strength, and the angel, placing the trumpet to his mouth, sounds it very loudly. When the servants in the chamber hear this each one of them pours out his drink into its proper pipe, and the pipes pour them out from above and below into the basins prepared for this, and then the cup-bearers draw the drinks and carry them round the palace to the men and women.