Distillation of lemongrass oil in the neighborhood of Alwaye (Travancore)-1910 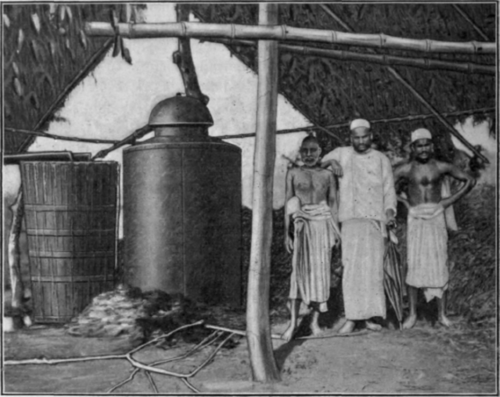 Distillation of lemongrass oil in the neighborhood of Alwaye (Travancore)

The description which follows has kindly been placed at the disposal of Schimmel & Co. by Mr. Werner Reinhart, of the firm of Volkart Brothers in Winterthur, who made a trip into the lemongrass oil districts. Report of Schimmel & Co. October 1910, 77.

A distillery of the natives, such as is illustrated on this page, fig. 24, usually remains standing all year around. It is always covered by a straw roof resting on bamboo poles. A copper cylinder about 6 ft. in height and 3 ft. in diameter rests on a fire place built of stones and about 1 ft. high. It is not provided with a chimney, but the air has access through the openings between the loosely piled stones. At about one-half its height, the cylinder is provided with a lateral opening, that can be closed by a door through which the grass is introduced into the still and through which it is also removed. The top of the cylinder is closed by a removable helmet, which is connected by means of a copper tube with the serpentine condenser which rests in a wooden vat about 6 ft. high. By means of a wooden trough, water is conducted from a well to the condenser. As receiver a vessel is used that is constructed upon the principle of the Florentine flask, with this difference, however, that it consists of a very wide open cylinder.

In this manner a large surface is created on which the oil collects and can be skimmed off by means of a spoon. The aqueous distillate flows off through a lateral tube which is fastened to the lower end of the cylinder and passes upward at an acute angle. Contrary to the usual practice, this aromatic water is not used over again for the distillation of a new charge of grass, but is allowed to flow away.