Christianity had first come to China in the year 64 when the Apostl Thomas came to Sian, China from India where he had come in the year 52. Other believers are believed to have brought the gospel on to Japan by the year 70 AD. 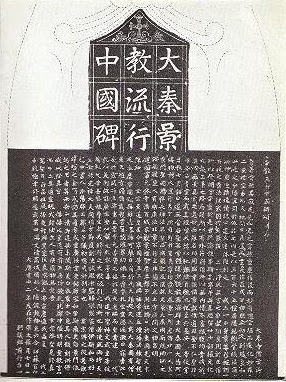 The Nestorian Stele entitled 大秦景教流行中國碑 "Stele to the propagation in China of the luminous religion of Daqin", was erected in China in 781. It is a 279-cm tall limestone block with text in both Chinese and Syriac, describing the existence of Christian communities in several cities in northern China. It reveals that the initial Nestorian Christian church had met recognition by the Tang Emperor Taizong, due to efforts of the Christian missionary Alopen


On top of the tablet, there is a cross.

Below this headpiece there is a long Chinese inscription, consisting of around 1,900 Chinese characters, which is glossed occasionally in Syriac (several sentences, amounting to about 50 Syriac words).

Calling God "Veritable Majesty", the text refers to Genesis, the cross, and the baptism. It also pays tribute to missionaries and benefactors of the church, who are known to have arrived in China by 640. The text contain the name of an early missionary, Alopen. The tablet describes the "Illustrious Religion", emphasizing the Trinity and the Incarnation, but there is nothing about Christ's crucifixion or resurrection. Other Chinese elements referred to include a wooden bell, beard, tonsure, and renunciation. The Syriac proper names for God, Christ and Satan (Allaha, Mshiha and Satana) were rendered phonetically into Chinese. Chinese transliterations were also made of one or two words of Sanskrit origin such as Sphatica and Dasa. There is also a Persian word denoting Sunday. 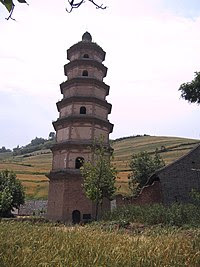 Daqin Pagoda (大秦塔, "The Roman Tower") in Chang'an, Shaanxi Province, located about two kilometres to the west of Lou Guan Tai temple, is the remnant of the earliest surviving Christian church in China. The church and the monastery were built in 640 by early Nestorian missionaries. Daqin is the name for the Roman Empire in the early Chinese language documents of the first and second century, by the mid-ninth century it was also used to refer to the mission churches of the Syriac Christian
Persecution of Christians in China led to the abandonment of Daqin in about 845. Much later, in 1300, a Buddhist temple was installed in the pagoda. An earthquake severely damaged the pagoda in 1556 and it was finally abandoned. Due to the earthquake, many of the underground chambers of the complex are no longer reachable. Daqin was "rediscovered" in 1998 and its roots in early Chinese Christianity were recognized


The stele is thought to have been buried in 845, during a campaign of anti-Buddhist persecution, which also affected the Nestorians.


The stele was unearthed in the late Ming Dynasty (between 1623 and 1625) beside Chongren Temple (崇仁寺). According to the account by the Jesuit Alvaro Semedo, the workers who found the stele immediately reported the find to the governor, who soon visited the monument, and had it installed on a pedestal, under a protective roof, requesting the nearby Buddhist monastery to care for it.

The newly discovered stele attracted attention of local intellectuals. It was Zhang Gengyou (Wade-Giles: Chang Keng-yu) who first identified the text as Christian in content. Zhang, who had been aware of Christianity through Matteo Ricci, and who himself may have been Christian, sent a copy of the stele's Chinese text to his Christian friend, Leon Li Zhizao in Hangzhou, who in his turn told about it to the locally based Jesuits.

The first publication of the original Chinese and Syriac text of the inscription in Europe is attributed to Athanasius Kircher. China Illustrata edited by Kircher (1667) included a reproduction of the original inscription in Chinese characters, Romanization of the text, and a Latin translation. This was perhaps the first sizeable Chinese text made available in its original form to the European public. A sophisticated Romanization system, reflecting Chinese tones, used to transcribe the text, was the one developed earlier by Matteo Ricci's collaborator Lazzaro Cattaneo (1560–1640). The work of the transcription and translation was carried out by Michał Boym and two young Chinese Christians who visited Rome in the 1650s and 1660s: Boym's traveling companion Andreas Zheng (Chinese: 郑安德勒; pinyin: Zhèng Āndélè, Wade-Giles: Cheng An-to-le) and, later, another person who signed in Latin as "Matthaeus Sina". D.E. Mungello suggests that "Matthaeus Sina" may have been the person who traveled from China to Europe overland with Johann Grueber. 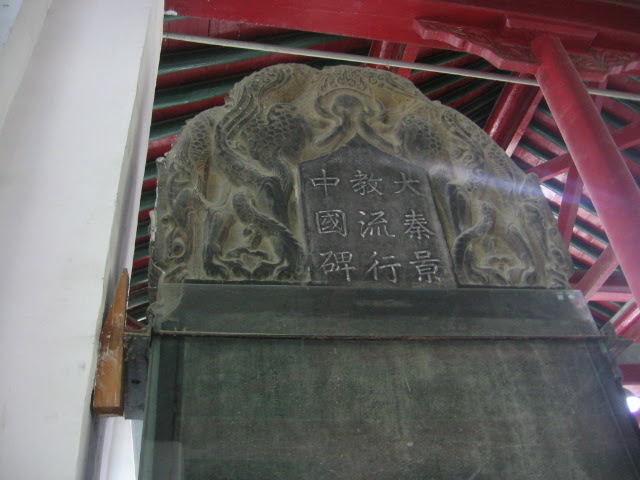 The stele in Beilin Museum

Other early Christian monuments in China

Numerous Christian gravestones have also been found in China in the Xinjiang region, Quanzhou and elsewhere from a somewhat later period. There are also two much later stelae (from 960 and 1365) presenting a curious mix of Christian and Buddhist aspects, which are preserved at the site of the former Monastery of the cross in the Fangshan District, near Beijing. 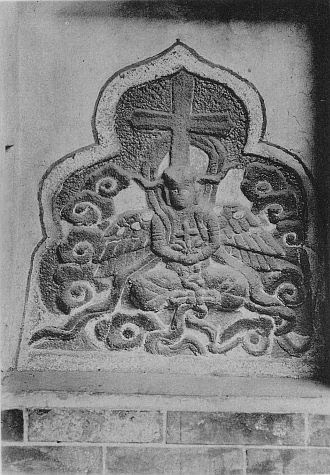 A Nestorian tombstone from Quanzhou