Early Steam-Powered Cycles:-it was not until the mid to late 1800s that it could be scaled down to a size that could be fitted to a vélocipède. By combining the human-powered bicycle with Newcomen's steam-engine, the motorized bicycle, or "motor-cycle (motocyclette, vélocipède à vapeur) was born.

The first motorcycle powered by an internal combustion (gas) engine was built by Gottlieb Daimler (1834-1900) and Wilhelm Maybach (1846-1929) in 1885, and called the "Einspur." Their company, the Daimler Motor Company of Stuttgart, Germany was formed after the two left their employment at Deutz Gasmotorenfabrik AG, where Daimler worked as their technical director. Daimler's engine was based on the "Otto-Cycle" engine, designed three years earlier by Eugen Langen and Dr. Nikolaus Otto, who was a co-owner of Deutz Gasmotorenfabrik. Otto's engine was based on the earlier work of Alphonse Beau de Rochas in the early 1860s.
The engine for the Einspur was developed in 1883, weighing just 80 kg compared to other internal-combustion engines at the time which weighed as much as 300kg. The Daimler engine used a new type of ignition system consisting of an incandescent platinum tube (inside the cylinder) heated by an outside burner. The Daimler motor produced 0.5 horsepower, and turned at 450 to 900 rpm. This self-firing ignition system was patented by Daimler in 1883, and by 1885 their new engine was fitted to their Einspur motorcycle.

There are many claims on which machine was actually the first motorcycle: Gottlieb Daimler’s was probably first, in 1885. Felix Millet patented his rotary-engine in France in 1888, and a machine with a Millet- designed engine was entered in the Paris-Bordeaux race in 1894. His 1897 machine is pictured here.

1901 Original condition Indian Motorcycle with its original Indian impressed tires
On display at the Wells, ME Automobile Museum

1921 Martin Scootmobile[The Martin Scootmobile, designed by Charles Martin, was a three wheel vehicle powered by a two cylinder air cooled engine. It had a 60 inch wheel base and it weighed 150 pounds. It was priced at $250.]

1884 Plectocycle Front-Steering Tricycle
Being some of the first vehicles fitted with a differential gear, high wheeler tricycles such as this were the forerunner of the automobile. 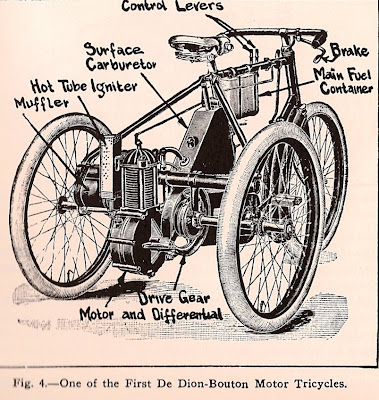 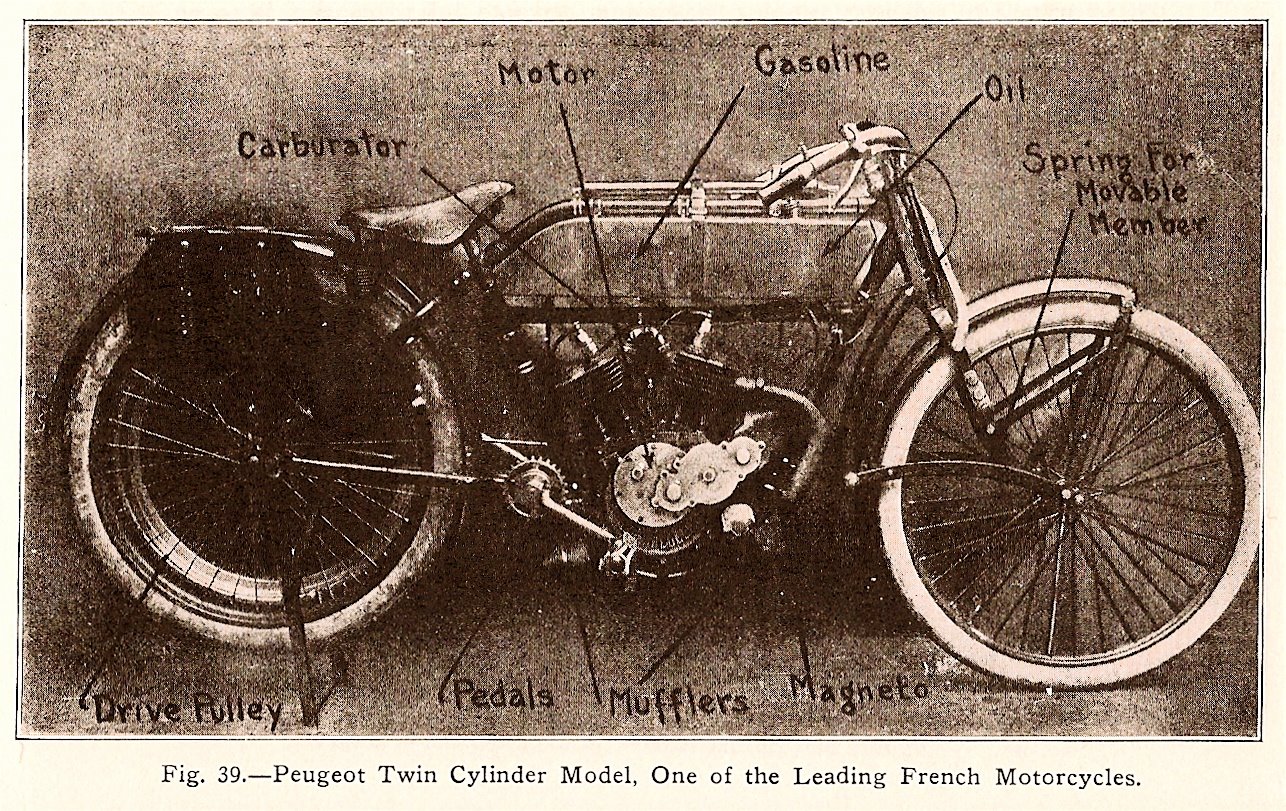 Germany made considerable use of motorcycles, many produced by BMW, during WWII, mostly for

patrols and courier duty. Some rifle regiments were motorcycle-mounted for fast movement. Germany also produced an unusual motorcycle hybrid, the Kettenkrad (left), which combined features of a halftrack and a motorcycle. Intended for offroad use or use where roads were bad or destroyed, it could be equipped with a small trailer and was sometimes used as a tractor or small truck. Some were produced after WWII as farm equipment.

A related post-war phenomenon is the motor scooter. Originating in Italy and rapidly accepted in Europe as a cheap mode of transportation in recovering war-torn economies, the scooter has also found a welcome in the developing economies of Asia. Long term residents of European and Asian countries are well aware of postwar transportation transitions from bicycles to motor scooters to automobiles as economies recovered

A more motorcycle-like device is the moped, a combination of bicycle and very small gasoline engine. Developed in the 1950s in Germany, it has spread throughout the world. It generally does not have to be licensed or insured as a road vehicle, except in Great Britain.

In its most recent incarnation, a mini-motor scooter has become popular among teenagers, who navigate their "chicken-power" engined vehicles through residential streets accompanied by a teeth-grinding howl from their high rpm engines. Ah, recognition: Pass the ear plugs!

In 1955, the Indian government needed sturdy and reliable motorcycles for its Army and police to patrol the rugged border highways. The first batch of 350cc Bullet - the super bike in India of all times, from the Royal Enfield Company of UK were received and assembled at Chennai. Since then, bikes in India have been flourishing as a two wheelers segment, and Indian bikes gaining on popularity all across the world.

In 1893, the Enfield Manufacturing Company Ltd was registered to manufacture bicycles. By 1899, Enfield were producing quadricycles with De Dion engines and experimenting with a heavy bicycle frame fitted with a Minerva engine clamped to the front downtube. In 1912, the Royal Enfield Model 180 sidecar combination was introduced with a 770 cc V-twin JAP engine which was raced successfully in the Isle of Man TT and at Brooklands.

1913 Enfield 425cc
In 1911, prior to the outbreak of the First World War in 1914, the company added Royal word with its name and became royal enfield. Royal Enfield supplied large numbers of motorcycles to the British War Department

From 1955 to 1959, Royal Enfields were painted red, and marketed in the USA as Indian Motorcycles by the Brockhouse Corporation, who had control of the Indian Sales Corporation (and therefore Indian Motorcycles) and had stopped manufacturing all American Indians in the Springfield factory in 1953. But Americans were not impressed by the badge engineering and the marketing agreement ended in 1960, and from 1961, Royal Enfields were available in the US under their own name. The largest Enfield "Indian" was a 700 cc twin named the Chief, like its American predecessors.
The Redditch factory ceased production in 1967 and the Bradford-on-Avon factory closed in 1970, which meant the end of the British Royal Enfield. After the factory closed a little over two hundred Series II Interceptor engines were stranded at the dock in 1970. These engines had been on their way to Floyd Clymer in the US, who unfortunately had just died. His export agents, Mitchell's of Birmingham, were left to dispose of them. They approached the Rickman brothers for a frame. The main problem of the Rickman brothers had always been engine supplies, so a limited run of Rickman Interceptors were promptly built

Royal Enfield motorcycles had been sold in India from 1949. In 1955, the Indian government looked for a suitable motorcycle for its police and army, for use patrolling the country's border. The Bullet was chosen as the most suitable bike for the job. The Indian government ordered 800 350 cc model Bullets, an enormous order for the time. In 1955, the Redditch company partnered Madras Motors in India in forming 'Enfield India' to assemble, under licence, the 350 cc Royal Enfield Bullet motorcycle in Madras (now called Chennai). Under Indian law, Madras Motors owned the majority (over 50%) of shares in the company. In 1957 tooling equipment was sold to Enfield India so that they could manufacture components.

Royal Enfield India is still manufacturing in India and is being sold in India and is also being exported to Europe as well as America and Australia. Recently Royal Enfield has undergone a major retooling specially in the engine department with introduction of twin spark unit construction engine on all its models with EFI available on their flagship 500cc model. This retooling has sparked such an interest in these bikes that they have started double shifts at the plants. These bikes, which in spite of their modern engines look as much a classic as their 1950 counterparts, are on a 6 month wait-list.