BICYCLES AND TRICYCLES --Whereas bicycle clubs and runs tended to focus on competition, tricycling events were a social affair, often involving a parade around town followed by tea. Tricycles were more expensive, so tended to a more upmarket clientele. Tricycle enthusiasts soon started to look down on cyclists, especially as secondhand high wheelers were by now in the hands of lower-class youths, removing their snob appeal.

The first contraption that can realistically be said resembles a bicycle was constructed around 1790 by Comte Mede de Sivrac of France. Called a celerifere, it was a wooden scooter-like device with no pedals or steering. A similar model, improved with a steering mechanism attached to the front wheel, was created in 1816 by German Baron Karl von Drais de Sauerbrun. He called it a Draisienne, after himself, though popular parlance also dubbed it the hobby horse.
When using either of these devices, the rider perched on a seat between two wheels similarly sized wheels, and using the feet, propelled the bicycle a bit like a scooter. Drais exhibited his bicycle in Paris in 1818, and while popularly received, its design limited its use to really just flat, well-groomed paths through gardens and parks, which were off-limits to a good portion of the population in those days.

When Pedals Were Added - A Big Improvement:-

MacMillan came up with an idea for the first pedal set-up that could more effectively drive the bike. Using his blacksmith tools, he put his idea into place
Macmillan's contraption had a wood frame and iron-rimmed wooden wheels. The front wheel, which provided limited steering measured 30 inches (760 mm) in diameter, while the back had a 40 inch (1016 mm) wheel and was attached to pedals via connecting rods. In total, Macmillan's bike weighed 57 lb (26 kg). His creation gathered a lot of attention, and Macmillan helped generate additional publicity when he rode the bike 68 miles to visit his brothers in Glasgow.

The Boneshaker - Invented by Michaux and Lallement

The vélocipède ("fast foot") was also known as the "boneshaker" thanks to its rough ride, caused by its stiff iron frame and wooden wheels wrapped in an iron rim.
Pierre and Ernest Michaux as being the true inventors of the modern bicycle. This father and son duo operated a company that made carriages in Paris when they first assembled a two-wheeled vélocipède around 1867.

By 1870, metalworking had improved to the point that bicycles began to be constructed entirely of metal, an improvement in both performance and material strength, and bike design began to change accordingly. The pedals were still attached directly to the front wheel but solid rubber tires and long spokes on a much large front wheel provided a greatly improved ride. Also, the bigger the wheels, the faster you could go, and the Penny Farthing as they were called enjoyed a great popularity in the Europe and the United States in the 1870s and 1880s.
The main hazard to this design was its (un)safety factor, as the riders (usually young men) sat so high up that they were very vulnerable to road hazards. The braking mechanism was almost more symbolic than functional, and there was really no way to slow the bike. And, if something were to stop the front wheel suddenly, such as a rut or object stuck in the spokes, the rider was immediately bucked forward as he rotated up over the front wheel to land squarely on his head. Hence the origin of the term “breakneck speed,” since a crash often produced truly devastating results.

A major breakthrough came in 1885 with John Kemp Starley's the creation of (or maybe "return to" is more accurate) a bike design that featured a rider perched much lower between two wheels of the same size, coupled with a sprocket and chain system that drove the bike from the rear wheel. This was the same basic "diamond frame" design still in use in today's bikes.
Promoted as touring machines, tricycle manufacturers were keen to demonstrate their practicalities. In 1882, Mr A. Bird rode a Humber tricycle from Birmingham to Cambridge. The distance quoted is 222 miles, so I assume this must have been a return journey, and Mr Bird completed it in 24 hours, only 20 miles less than the bicycle record of the time.

During their brief reign high-wheel tricycles had an enormous influence on society, capturing the public imagination not only in Great Britain where they flourished but around the world too. As a result, bicycles, tricycles and, within 20 years, motorcycles and cars, were firmly implanted on the roads of the world. These tricycles are still considered to be the ‘aristocracy’ of the veteran cycling world. 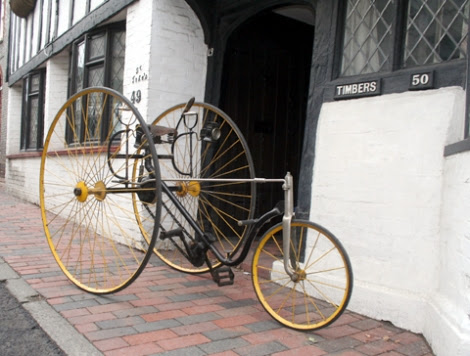 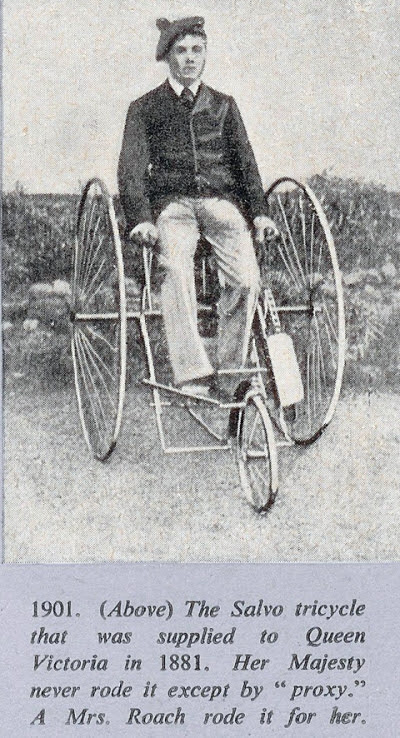 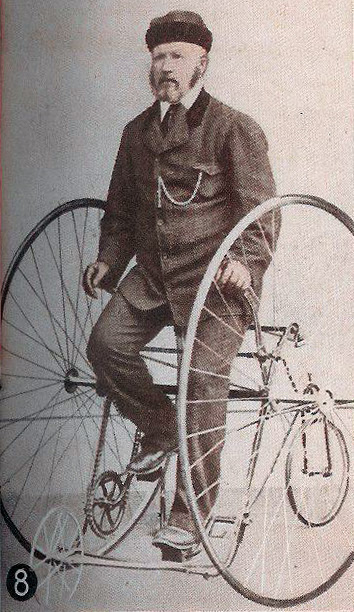 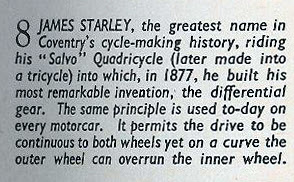 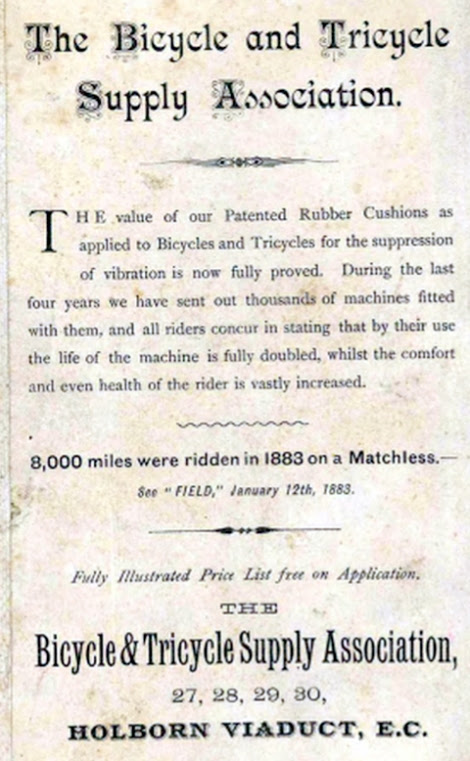 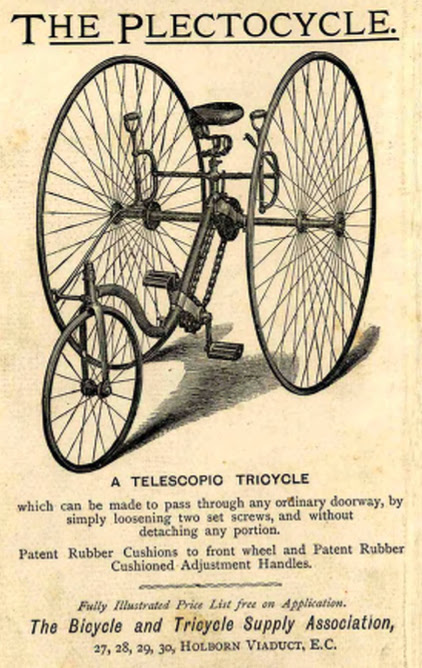 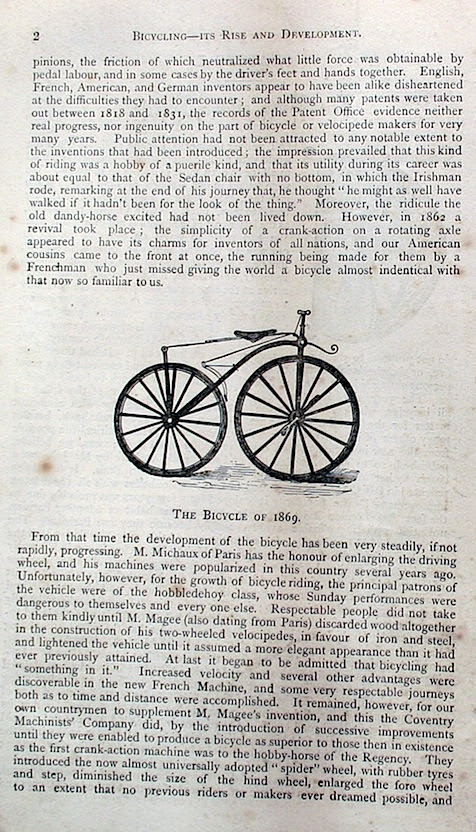 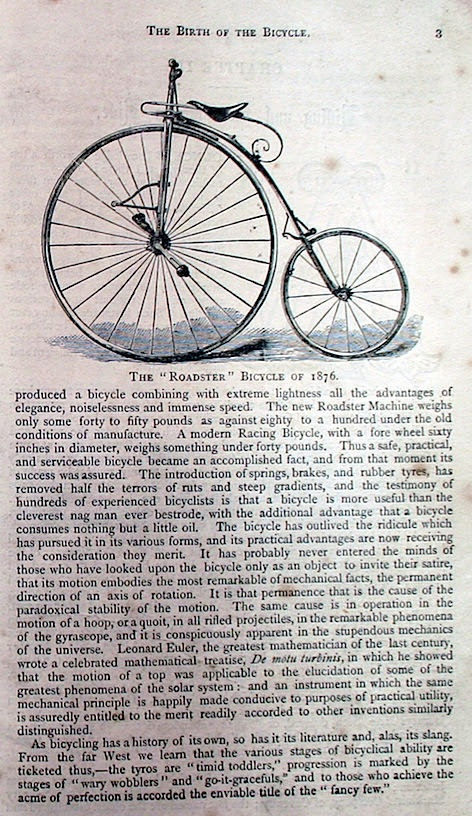 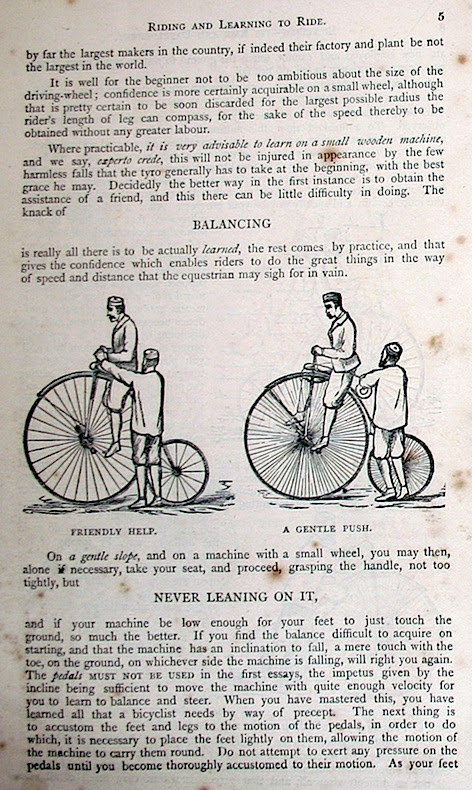 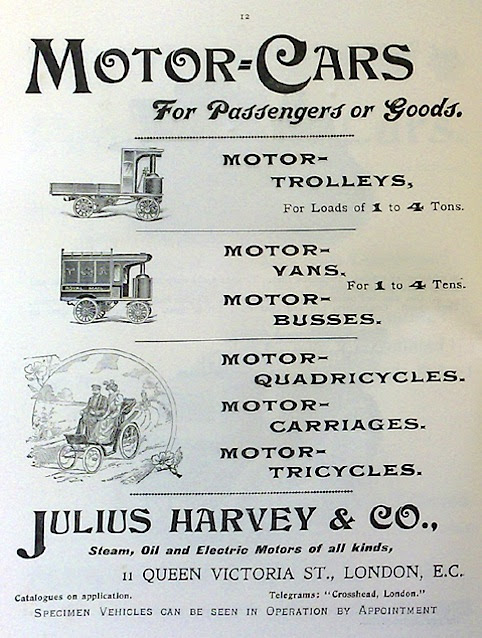 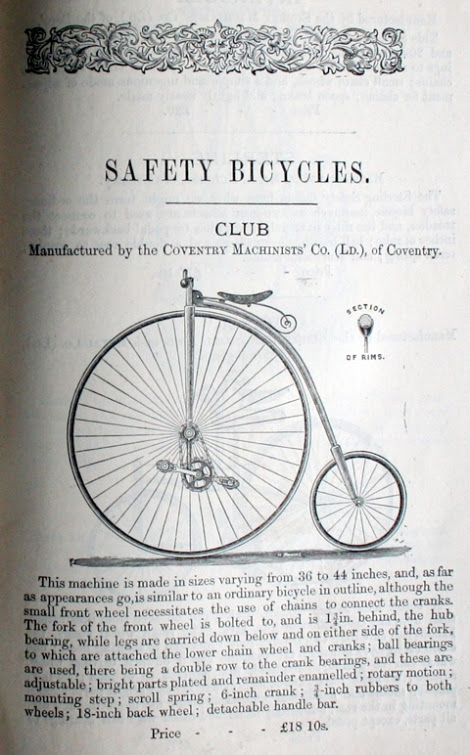 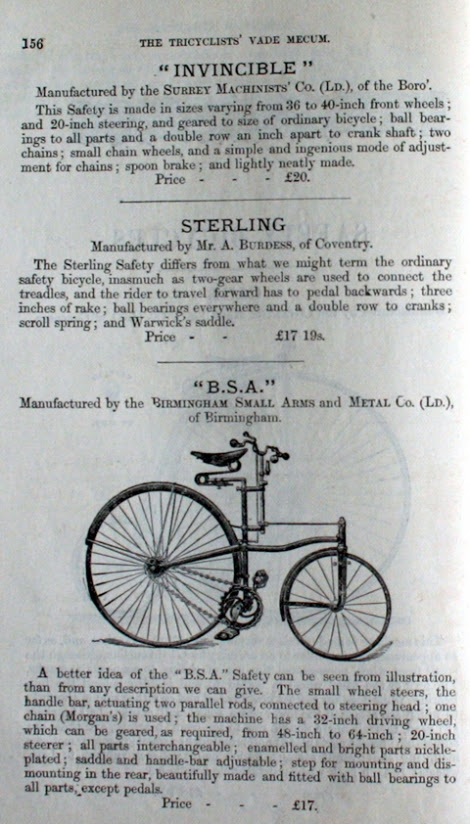 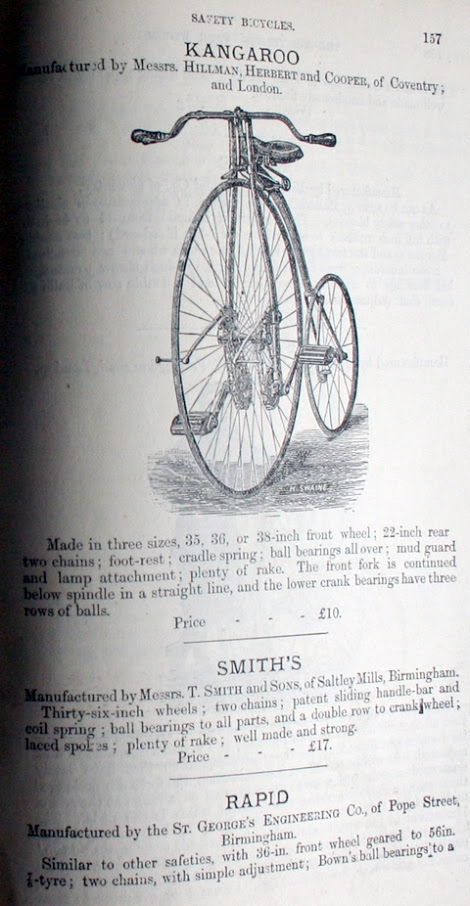 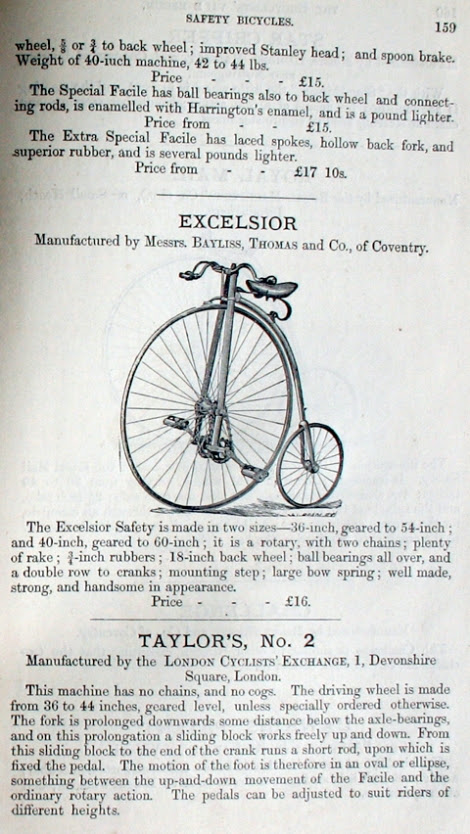 
The first tricycle was built in 1680 for a German paraplegic named Stephan Farffler, who lived near Nuremburg. He was a watch-maker and the tricycle had gears and hand cranks.
Two Frenchmen, named Blanchard and Maguier invented a tricycle in 1789, which prompted the Journal de Paris to coin the words ‘bicycle’ and ‘tricycle’ and publish them on July 27th to differentiate between the two types of machines.
Denis Johnson patented a tricycle in England in 1818, and a three-wheeled swiftwalker was introduced in 1819.
On November 18, 1876, James Starley introduced the Coventry Lever Tricycle, a side-driven two-track, lever-driven machine, and that started the tricycling craze in Great Britain. It had two small wheels on the right side, that both steered simultaneously. A large drive wheel was on the left side. In 1877, he introduced the Coventry Rotary, one of the first rotary chain drive tricycles.
In 1879, twenty types of tricycles and multi-wheel cycles were produced in Coventry, England, and by 1884, there were over 120 different models produced by 20 manufacturers. Tricycles were used especially by those who could not ride high wheelers, such as women who were confined in the long dresses of the day, and short or unathletic men.

From 1881 to 1886 in Great Britain, more tricycles were built than bicycles, but this was primarily a class phenomenon, since tricycles were more expensive, perceived as more genteel, and the upper classes had the disposable income to buy them for the women in the family. As a result, tricycling remained popular in Great Britain long after riders turned away from them elsewhere. They even had regular racing. 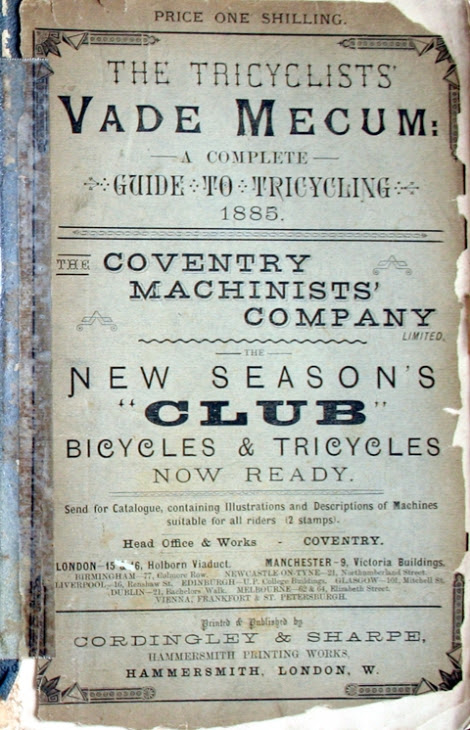 In 1901, the first official triporteur race took place from Paris to Versailles and back. In 1903 the course was 38km – from Ville-D’ Avray to Palaiseau and back.
From 1922 the Championnat des Triporteurs was held annually in mid-November; the course was 50km. 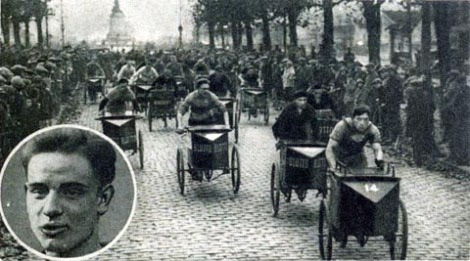 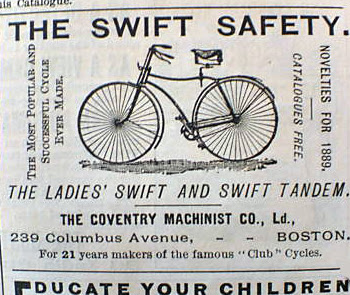 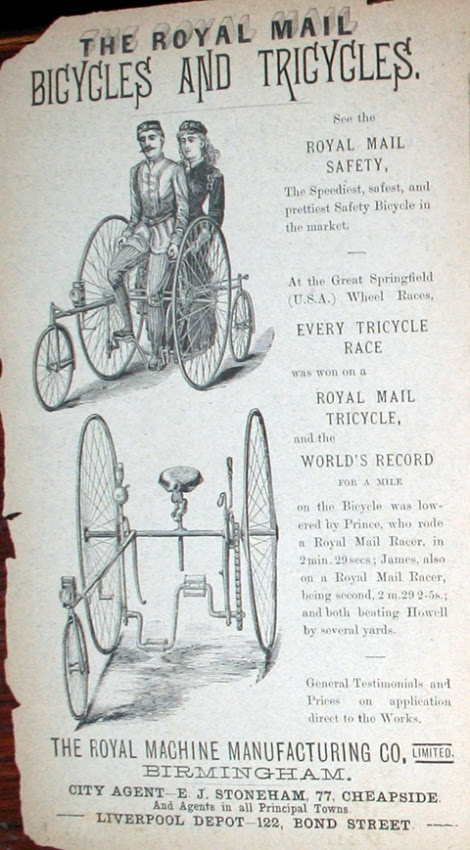 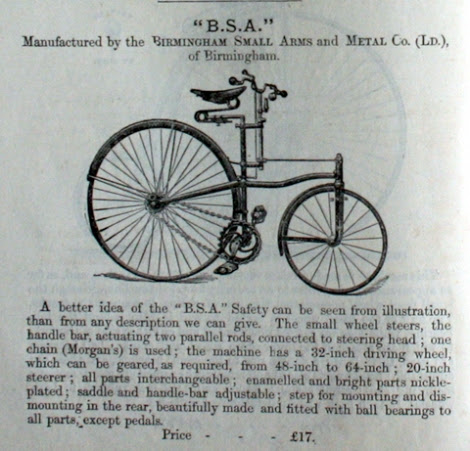 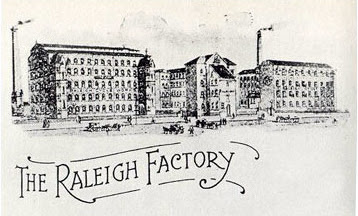 Raleigh Street, Nottingham, was the site of a small workshop which in 1886 started producing diamond-frame safety bicycles at the rate of three a week. Frank Bowden, a successful lawyer and convert to cycling, bought the firm in 1887. Raleigh survived the Great Depression well. It acquired Humber cycles in 1932 and the following year started producing a three-wheeler car.
The name of its budget range, launched in 1938 as Gazelle, was changed to Robin Hood, and Raleigh acquired Rudge-Whitworth.Raleigh acquired two major rival groups: Triumph and Three Spires in 1954, and BSA (including New Hudson and Sunbeam) in 1957. 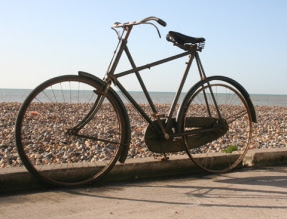 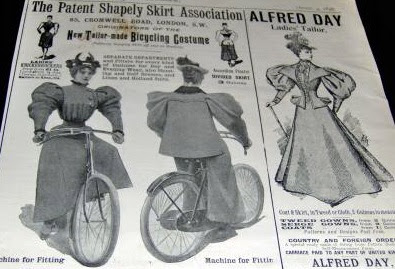 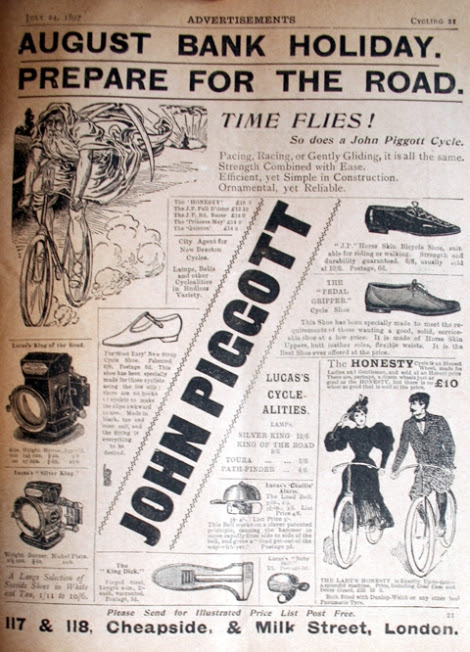 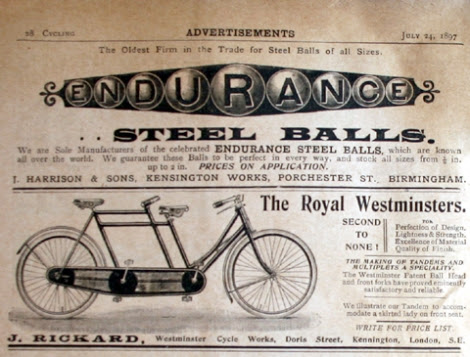 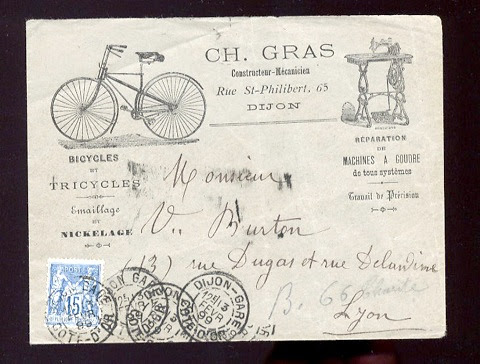 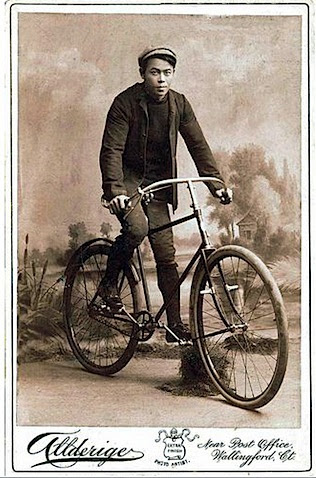 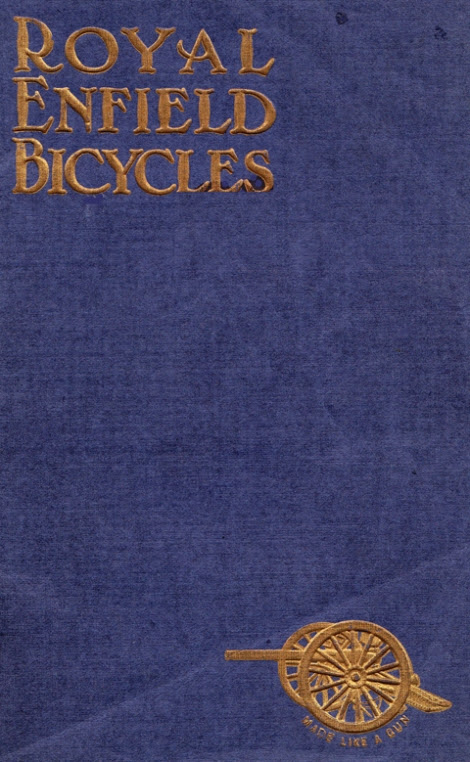 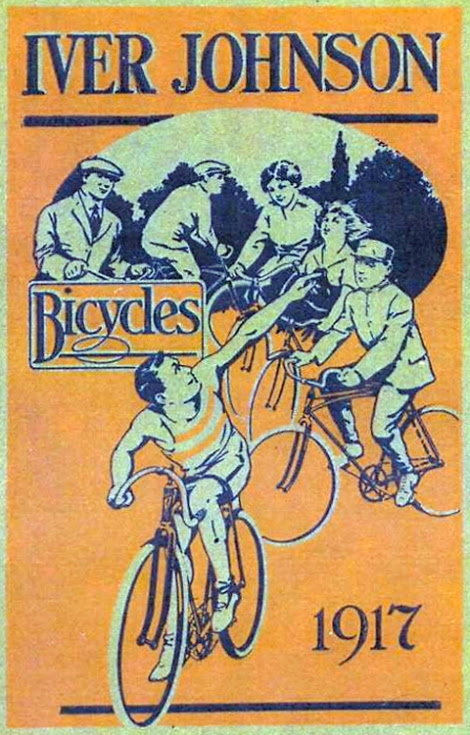 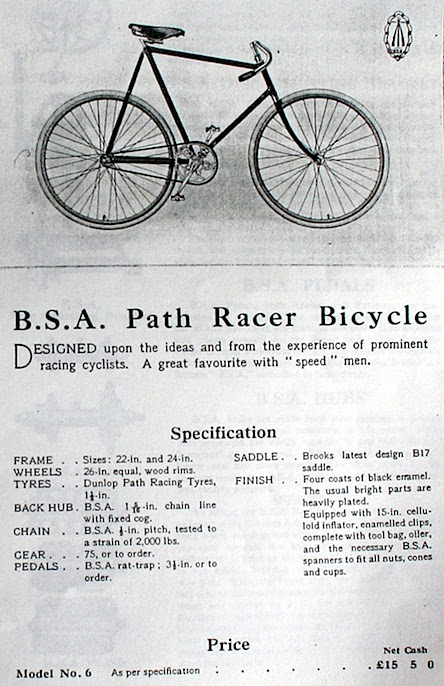 U.S. Library of Congress
"Learn to ride a bicycle. You will not regret it if you live."