The Chamber of Princes was an institution established in 1920 by royal proclamation to provide a forum in which the rulers of the Indian princely states could voice their needs and aspirations to the government of British India.[IN FACT IT WAS PART OF THE CUNNING "DIVIDE AND RULE "POLICY OF THE BRITISH COLONIALISTS-DIVIDE INTO MAHARAJAH RULED;HINDU RULED;MUSLIM(NOW PAKISTAN) RULED ETC 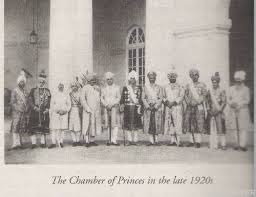 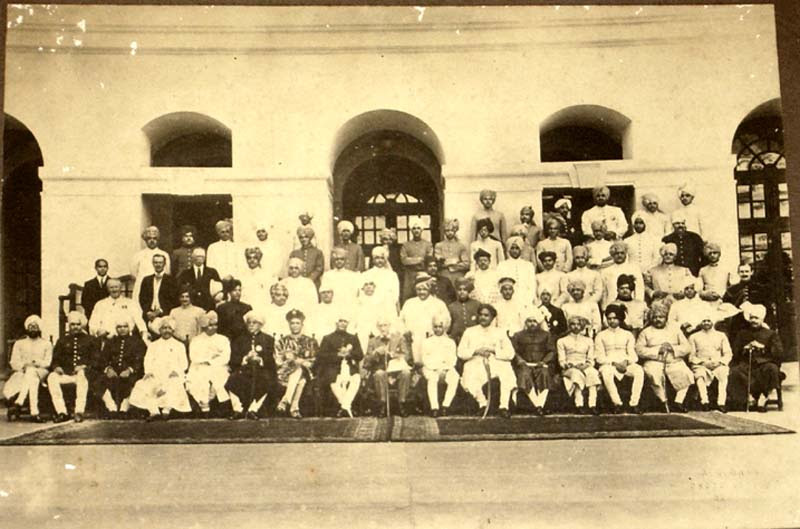 The Chamber of Princes was an institution established in 1920 by royal proclamation to provide a forum in which the rulers of the Indian princely states could voice their needs and aspirations to the government of British India. It survived until the end of the British Raj in 1947.
The Chamber first met in 1921 and initially consisted of 120 members. Its creation followed the abandonment by the British of their long-established policy of isolating the Indian rulers from each other and also from the rest of the world.
On 12 March 1940, the Chamber resolved:

"The Chamber of Princes, while welcoming the attainment by India of its due place among the Dominions of the British Commonwealth under the British Crown, records its emphatic and firm view that, in any future constitution for India, the essential guarantees and safeguards for the preservation of the sovereignty and autonomy of the States and for the protection of their rights and interests arising from treaties, and engagements and sanads or otherwise, should be effectively provided and that any unit should not be placed in a position to dominate the others or to interfere with the rights and safeguards guaranteed to them, and that all parties must be ensured their due share and fair play; And that, in any negotiations for formulating a constitution for India, whether independently of the Government of India Act 1935, or by revision of that Act, representatives of the States and of this Chamber should have a voice proportionate to their importance and historical position."

INDIAN PRINCELY STATES AT THE TIME OF INDEPENDENCE ON AUGUST 15, 1947

There have been various differences in organisation before, repeatedly quite significant, during the British Raj.

Princely States of the Baluchistan Agency.

Princely States of the Gwalior Residency.

Princely States of the Madras Presidency.

Princely States of the North-West Frontier States Agency. Agencies included the Dir Swat and Chitral Agency and the Deputy Commissioner of Hazara acting as the Political Agent for Amb and Phulra.

The States of Hunza and Nagar and many feudal Jagirs (Puniyal, Shigar etc.) in the Gilgit Agency were tributary to the Maharaja of Kashmir.

[edit]States of the Rajasthan Agency

States of the Rajputana Agency. 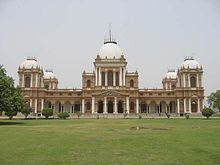 Noor Mahal, the official residence of theNawabs of bahawalpur 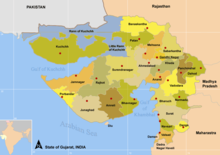 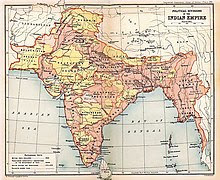 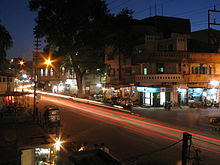 [edit]States of the Eastern States Agency 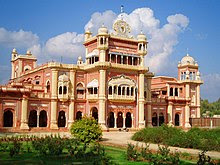 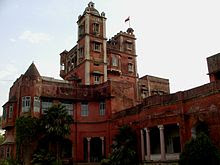 page is part of © FOTW Flags Of The World website

As far as I have learned from reading, the princely flags are banned. State flags for the modern Indian states do not exist save for Jammu and Kashmir. Even use of the national flag of India is restricted. If I recall, Whitney Smith told me that the average Indian citizen may only fly the national flag on certain prescribed holidays. Use on other days is a civil offence.
Don Healey, 1 July 1996
Now, the current usage: The "ex-princely" families still use the flags, although the central government doesn't like it (the provincial governments, especially in Rajasthan, Madhya Pradesh, and Gujarat look gleefully the other way). Most of the residences of the ex-rulers still fly the State flag, for example Gwalior or Jaipur, those rulers who still own their "houses" in New Delhi (sort of "high commissions" until 1950 or so, when some [Hyderabad] were taken as government ministry buildings [Hyderabad House became the Railway Ministry]) still fly the flag (Alwar comes in particular to mind here). Even some of the rulers (well, ex-rulers) fly their flags over their own private houses in Delhi (H.H. Dhrangadhgra flew a gigantic Dhrangadhra State flag over his house, two blocks from the Chinese embassy!).

None of this is legal, as such, but little of it is restrained. As the "pre-1947 generation" passes, this practice is falling into abeyance (and the pre-47 flags fall apart in the Indian climate!). Also, in some cases, the State flags have been used by members of the royal houses standing for election to parliament (as in the recently-concluded elections). (I'm trying to get together some postings on the political party flags used in that contest.
Ed Haynes, 1 July 1996
In Murray's Handbook for travellers in India (&c) there is a curious passage (at least to me): 'The Nizam succeeded his grandfather in 1967 (!)'... Does anybody know what his position then was? I don't suppose he had (has) the right to hoist his own flag?
Jarig Bakker, 13 November 1998
In 1956 the Nizam officially became a private citizen of India (as did all the princes). Unofficially many of the princes continued to hold court, maintain ceremonial bodyguards, and fly their flags. In some cases this provides valuable tourist revenue for India. I believe the official position of the government of India is to frown on continuing vestiges of the princely states, but in practice I think the government is hoping that attrition (e.g. the passing of the 1947 generation -- both the princes and the people who validate their existence) will solve the problem. Considering that many of these states existed for centuries, it may take more than a generation to erase regal behaviour (especially considering that many princes remain in their palaces -- unlike former European monarchs who are exiled from their countries.)
In short, many Indian States flags probably still fly, but not beyond palace grounds; and India wishes they would go away.
Todd Mills, 14 November 1998
While the Government of India does not "officially recognise the princes anymore and does not grant ordinary citizens the right to fly their own flags, many of the former princely families here, including the Patwardhans, fly their flags in their home states.

Flags are used by the princely families on Ceremonial occasions like marriages and during funerals. When my grandfather the Late His Highness Shrimant Madhavrao Raosaheb Patwardhan, Raja of Miraj, passed away, the State Government gave him a state funeral.
GG Patwardhan, 5 Jun 1999
The two terms "British India" and "Princely State" are mutually exclusive. If somewhere was in British India it was not a Princely State, and if it was a Princely State it was not in British India. British India was Bombay, Sind, British Baluchistan, North West Frontier Province, Punjab, United Provinces, Central Provinces, Madras, Bihar, Orissa, Bengal and Assam. The 140 large, and 420 small states that made up the rest of India were not part of British India.
David Prothero, 30 April 2002

THE STATES ORDERED BY "GUNS"

Below, the states are ordered by the old British system of the numbers of "guns" in a ruler's salute. The "major" states are 21-, 19- and 17-gun states.

Below, the states are ordered alphabetically, including those for which the number of guns is unknown.

Below, the states are ordered administratively, according to a map of british India that can be found here. Other geographical information comes from several modern atlases.

As far as I could understand, British India was divided into two different types of organization: the Provinces, directly ruled by the British crown either through a governor or a Chief Commissioner, and further subdivided in other territorial entities (Ed's site has some information on this, but I found it somewhat confusing and did not understand it enough to say anything), and the agencies and residencies, that where the British organisms that superintended the issues relative to groups of princely states. There where also some special areas, on whose organization I have no information.

In many cases, Filcher (1984) shows a more elaborate "state" flag with coats of arms, etc. Based on my personal observation in many of the erstwhile states and conversations with the some of the ex-rulers, these elaborate flags usually existed on paper only and more simple ("civil") flags were more common.
Ed Haynes, 3 April 1996

RED ENSIGNS OF THE NATIVE STATES

The term "Native States" was used in official correspondence about the defaced Red Ensigns instead of "Princely States" under the heading "India"; in the National Geographic Magazine of September 1934, they are called, "Native Indian States". Anyway, the States in this context were those on the western seaboard of India which were protectorates of the Government of India.
In 1917 it was reported that vessels from these States, which flew their own State flag when within the territorial waters of India and other parts of the British Empire, were flying the British Red Ensign on the High Seas and in foreign territorial waters.
The inhabitants were not British subjects and were not legally entitled to fly the Red Ensign. It was decided that they could be authorized to fly a Red Ensign defaced with the badge of the appropriate State, as had been done for British North Borneo.
A problem arose because flying any form of Red Ensign made the ships subject to the Merchant Shipping Act of 1894. This imposed certain regulations to which the States objected. However after negotiating for three years an agreement was reached. As one Board of Trade official cynically wrote, "..the Act created liability to penalties but did not require enforcement."
On the 14th July 1921 an Order in Council authorised the application of Section 74 of the Merchant Shipping Act 1894, and a General Warrant, covering all twelve States as a group, was issued by the Admiralty on 2nd August 1921, with a request for sketches of revised designs, as the flags then in use were not suitable for use as badges on the Red Ensign.
The States submitted some interesting designs, of unacceptable proportions, canton size and badge size, but after another three years of protracted correspondence the individual Warrants were finally issued on the 10th October 1924.
The Office of Lord High Admiral issued the Warrants which all began,
"Red Ensign with the badge of said state on fly thereof ....."
and ended
"...to be worn by vessels belonging to the ruler or subjects of ...(named state)"