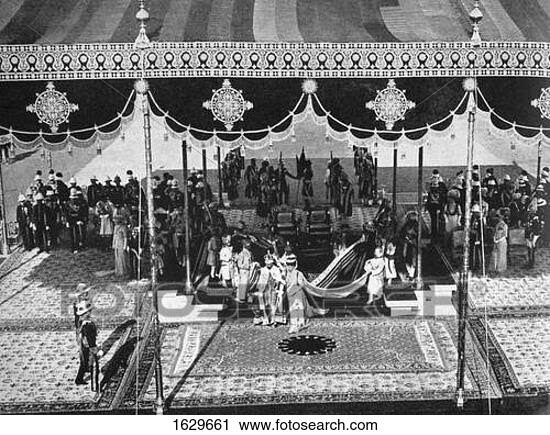 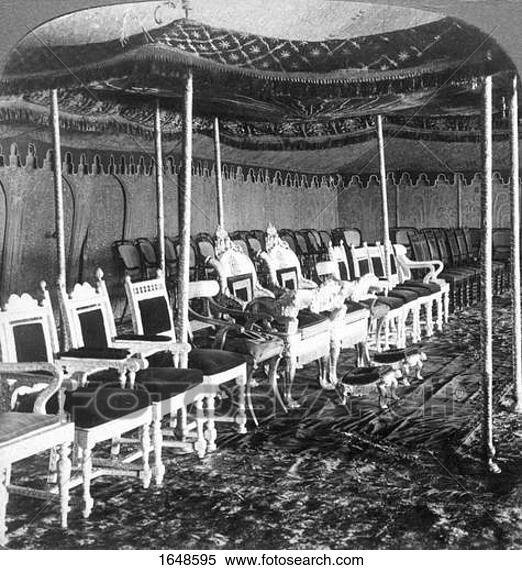 'The golden canopy in the Durbar tent of the Maharaja of Kashmir, Delhi, India 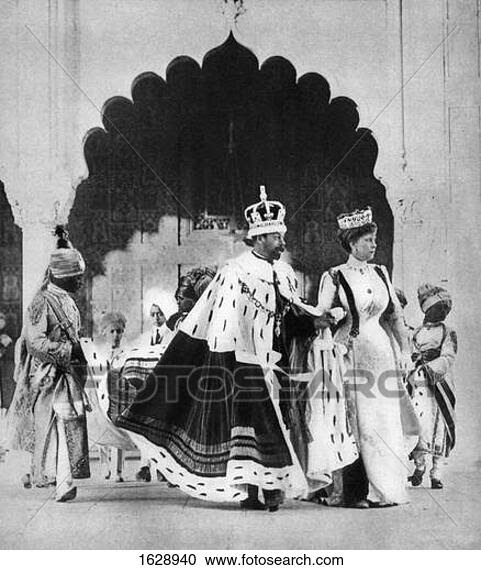 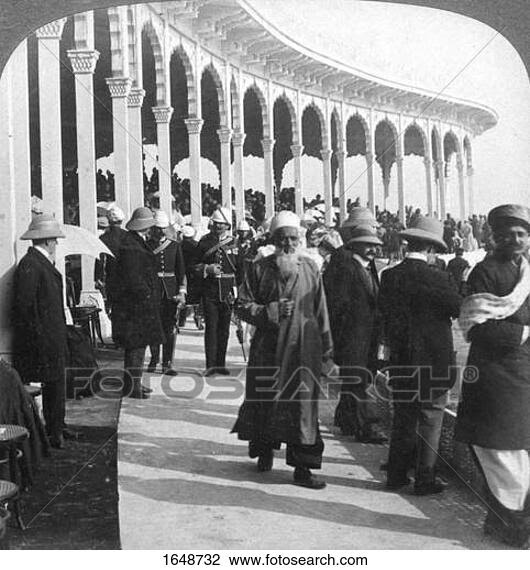 The Nizam of Hyderabad pays hommage at the Delhi Durbar, 1911 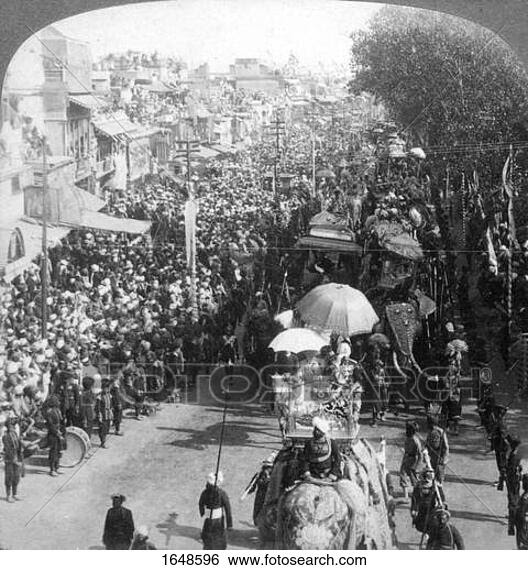 'The Duke and Duchess of Connaught and in the great Durbar procession, Delhi, India 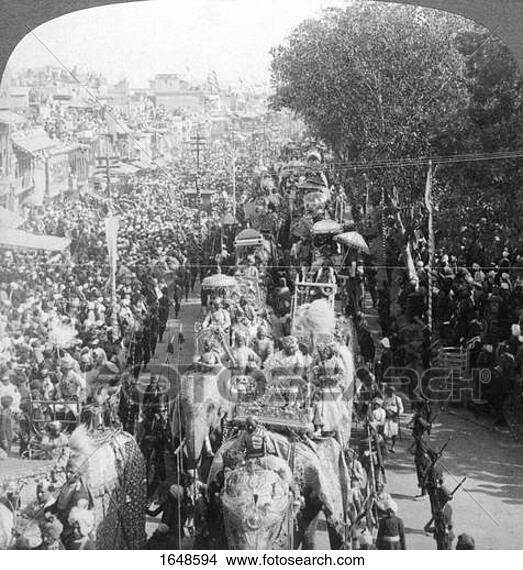 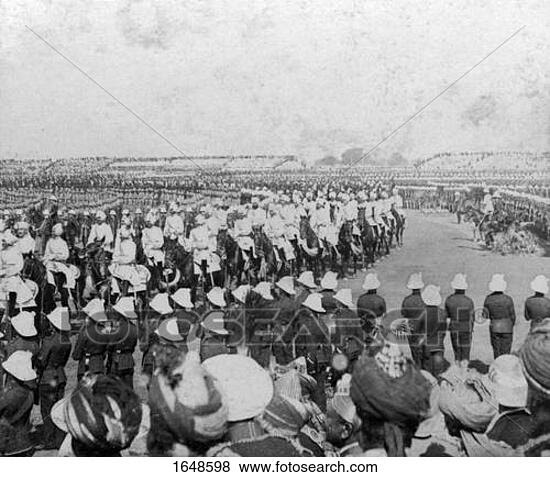 'The Imperial Cadet Corps escorting their majesties into the Durbar arena, Delhi, India 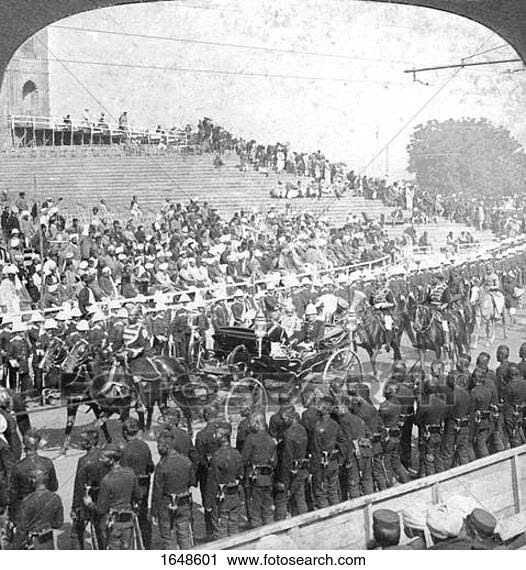 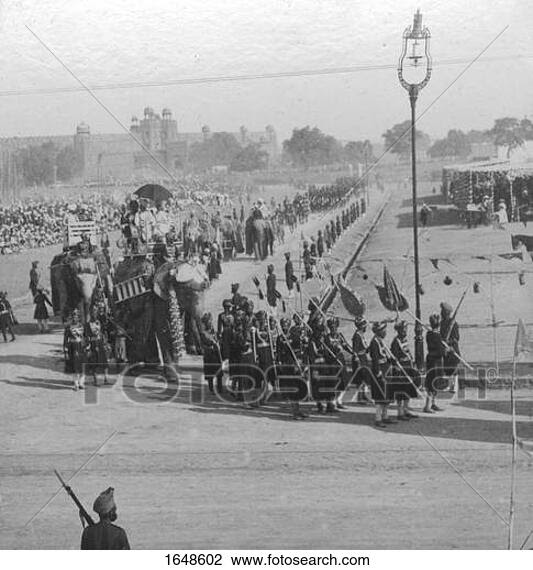 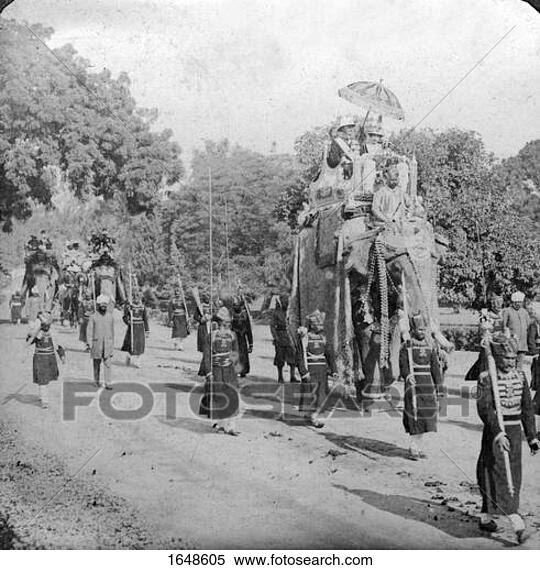 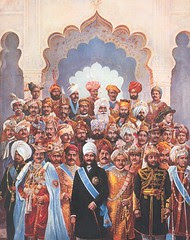 From Wikipedia, the free encyclopedia

The Delhi Durbar of 1911, with King George V and Queen Mary seated upon the dais.
The Delhi Durbar (Hindi: दिल्ली दरबार, Urdu: دلّی دُربار), meaning "Court of Delhi", was a mass assembly atCoronation Park, Delhi, India, to mark the coronation of aKing and Queen of the United Kingdom. Also known as the Imperial Durbar, it was held three times, in 1877, 1903, and 1911, at the height of the British Empire. The 1911 Durbar was the only one attended by the sovereign, who was George V. The term was derived from commonMughal term durbar.

Called the "Proclamation Durbar", the Durbar of 1877 was held beginning on 1 January 1877 to designate the coronation and proclaim Queen Victoria as Empress of India. The 1877 Durbar was largely an official event and not a popular occasion with mass appeal like 1903 and 1911. It was attended by the 1st Earl of Lytton - Viceroy of India, maharajas, nawabs and intellectuals. This was the culmination of transfer of control of East India Company held parts of India from the British East India Company to The Crown.
The Durbar was the beginning of a great transformation for India where the campaign for a free India was formally launched.[1]
Inside Victoria Memorial in Calcutta is an inscription taken from the Message of Queen Victoria presented at the 1877 Durbar to the people of India:

The Delhi Durbar of 1877. The Viceroy of India is seated on the dais to the left.
"We trust that the present occasion
may tend to unite in bonds of close
affection ourselves and our subjects;
that from the highest to the humblest,
all may feel that under our rule the
great principles of liberty, equity,
and justice are secured to them; and
to promote their happiness, to add to
their prosperity, and advance their
welfare, are the ever present aims and
objects of our Empire."
A medal to commemorate the Proclamation of the Queen as Empress of India was struck and distributed to honoured guests.[2]
Ramanath Tagore was made a Maharaja by Lord Lytton, viceroy of India.[3]
It was at this glittering durbar that a man in "homespun spotless white khadi" rose to read a citation on behalf of the Pune Sarvajanik Sabha.Ganesh Vasudeo Joshi put forth a demand couched in very polite language:
"We beg of Her Majesty to grant to India the same political and social status as is enjoyed by her British subjects."
With this demand, it can be said that the campaign for a free India was formally launched.[4]

The durbar was held to celebrate the coronation of King Edward VII and Queen Alexandra as Emperor and Empress of India. 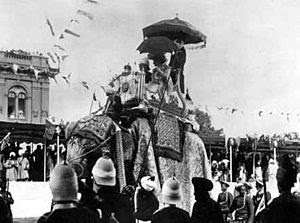 Lord Curzon and Lady Curzon arriving at the Delhi Durbar, 1903.
The two full weeks of festivities were devised in meticulous detail by Lord Curzon. It was a dazzling display of pomp, power and split second timing. Neither the earlier Delhi Durbar of 1877, nor the later Durbar held there in 1911, could match the pagentry of Lord Curzon’s 1903 festivities. In a few short months at the end of 1902, a deserted plain was transformed into an elaborate tented city, complete with temporary light railway to bring crowds of spectators out from Delhi, a post office with its own stamp, telephone and telegraphic facilities, a variety of stores, a Police force with specially designed uniform, hospital, magistrate’s court and complex sanitation, drainage and electric light installations. Souvenir guide books were sold and maps of the camping ground distributed. Marketing opportunities were craftily exploited. Special medals were struck, firework displays, exhibitions and glamorous dances held.
Edward VII, to Curzon’s disappointment, did not attend but sent his brother, theDuke of Connaught who arrived with a mass of dignitaries by train from Bombay just as Curzon and his government came in the other direction from Calcutta. The assembly awaiting them displayed possibly the greatest collection of jewels to be seen in one place. Each of the Indian princes was adorned with the most spectacular of his gems from the collections of centuries. Maharajahs came with great retinues from all over India, many of them meeting for the first time while the massed ranks of the Indian armies, under their Commander-in-Chief Lord Kitchener, paraded, played their bands and restrained the crowds of common people.[5]
On the first day, the Curzons entered the area of festivities, together with the maharajahs, riding on elephants, some with huge gold candelabras stuck on their tusks. The durbar ceremony itself fell on New Year's Day and was followed by days of polo and other sports, dinners, balls, military reviews, bands, and exhibitions. The world’s press dispatched their best journalists, artists and photographers to cover proceedings. The popularity of movie footage of the event, shown in makeshift cinemas throughout India, is often credited with having launched the country’s early film industry.[6][7]
The Aga Khan III used this occasion to speak out for the expansion of all types of educational facilities in India.[8]
The event culminated in a grand coronation ball attended only by the highest ranking guests, all reigned over by Lord Curzon and more so by the stunning Lady Curzon in her glittering jewels and regal peacock gown.[9]

Held in December to commemorate the coronation in Britain a few months earlier of King George V and Queen Mary, and their proclamation as Emperor and Empress of India--and, without public forewarning, the shifting of India's capital from Calcutta to Delhi. Practically every ruling prince, nobleman, landed gentry and other persons of note in India attended to pay obeisance to their sovereigns. The Sovereigns appeared in their Coronation robes, the King-Emperor wearing the Imperial Crown of India with eight arches, containing six thousand one hundred and seventy exquisitely cut diamonds, and covered with sapphires, emeralds and rubies, with a velvet and miniver cap all weighing 34.05 ounces (965 g). They then appeared at a darshan (a sight) at the jharoka (balcony window) of Red Fort, to receive half a million or more of the common people who had come to greet them.[10] A feature film of the coronation titled With Our King and Queen Through India (1912) – also known as The Durbar in Delhi – was filmed in the early color process Kinemacolor and released on 2 February 1912.[11]
A Delhi Herald of Arms Extraordinary and an Assistant Herald were appointed for the 1911 Durbar (Brigadier-General William Peyton andCaptain the Hon. Malik Mohammed Umar Hayat Khan), but their duties were more ceremonial than heraldic.[12]
There is a magnificent tiara belonging to the present Queen called the Delhi Durbar Tiara. The necklace was presented to Queen Mary by theMaharanee of Patiala on behalf of the Ladies of India to mark the first visit to India by a British Queen-Empress. At the Queen’s suggestion, it was designed to match her other emerald jewellery created for the Delhi Durbar. In 1912 Garrards slightly altered the necklace, making the existing emerald pendant detachable and adding a second detachable diamond pendant. This is an 8.8 carats (1,800 mg) marquise diamond known as Cullinan VII, one of the nine numbered stones cut from the Cullinan Diamond. The necklace was inherited by the Queen in 1953[13]and was recently worn by the Duchess of Cornwall to a ball where she met the Norwegian Royal Family.
During the durbar, the Gaekwar of Baroda, Maharajah Sayyaji Rao III caused a stir when he approached the royal couple without his jewellery on, and after a simple bow dared to turn his back to them when leaving. His action was interpreted as an open sign of dissent to British colonial rule.[14]
Twenty-six thousand eight hundred (26,800) Delhi Durbar Silver Medals of 1911 were awarded, mostly to men and officers of the British regiments. A small number were also struck in gold for award to Indian princely rulers and the highest ranking government officers.[15]
Today Coronation Park is a jealously guarded open space whose emptiness comes as a bit of a shock after the dense traffic and crowdedshanty towns of northern Delhi’s urban sprawl. It is mostly overgrown, neglected and locked. The Park is sometimes used for big religious festivals and municipal conventions.[16]

While Edward VIII abdicated in December 1936 before he had had any coronation, it was initially envisaged that his successor George VIwould ultimately visit India and have his own Durbar. The Indian National Congress passed a motion weeks after his accession calling for a boycott of any such visit, and in February 1937 Communist MP Willie Gallacher decried expenditure on such festivities in a country of such poverty.[17] The King's Speech of October 1937 included "I am looking forward with interest and pleasure to the time when it will be possible for Me to visit My Indian Empire",[18] to the satisfaction of Sir Hugh O'Neill.[19] However, the onset of World War II and the movement towards Indian independence meant this visit never happened.