Between 800 and 900 A.D., a large exodus of people occurred from the Punjabi region of India. These people are believed to be members of the Untouchables, a group within the Indian caste system comprised of animal traders and trainers, acrobats, dancers, musicians, palmists and metalworkers. These nomadic groups, generally referred to as Roman and/or gypsies, divided into two major migratory routes, the most traceable moving west across Asia and the European continent, including Spain. The first recorded account of Spanish Gitanos "Beticos" dates from 1447 in Barcelona.
It is also believed that a second migratory route took them down to and across North Africa (including Egypt) and up into Southern Spain "Andalusia" via the Straights of Gibraltar. This faction, known as Cale (black), has been far more difficult to verify and trace due to the great similarity of appearance and lifestyle to the indigenous peoples along the route. We should not forget that Southern Spain was part of the Islamic Empire for a period of 800 years.
Although, the Northern Beticos immigrated to the more tolerant Islamic region of Andalusia, to this day, the gypsies themselves maintain a great distinction between the Beticos and Cales, with virtually no intermarriage between the groups.
During the Inquisition of the Reconquista, even this tolerance ended while gypsies from all over Spain were herded into "gitanerias" or ghettos. However unjust and cruel, this persecution and isolation was the very influence that safeguarded the purity of their music and dance within the family group. Finally, in 1782, the Leniency Edict of Charles III restored some measure of freedom to the Spanish gypsy and allowed this music and dance to be presented to and adopted by the general population of Spain. This resulted in a period of great exploration and evolution within the art form, which continues to this day.

Bridging the cultural divide in India

Flamenco Music
The most important element of flamenco music is undeniably the singing, "Cante". In fact, originally flamenco was comprised purely of Cante, with handclapping "Palmas" or knuckle rapping percussive accompaniment. The guitar, a variation of the Arabic Oud, was gradually incorporated in the 19th century. The strongest influences evident in the evolution of Flamenco singing and music can be traced from:

Although much less research has been undertaken in the field of flamenco dance than music, it has been documented that during the Phoenician empire, in the city of Cadiz, Hindu dancers were hired as entertainers for the festivals, aspects of which were incorporated into local processions and religious festivals.
This very strong resemblance to East Indian dance is seen in the Katak, NianiPuri, Kathakal and Bharatanatyam forms. Elements such as the deep-seated plie, outturned leg position, sharp angles of the body and arms, splayed fingers, rapid barrel turns and, most certainly, the percussive foot movements are all evident in flamenco dance.
As previously mentioned, the Mozarabic "Zambra" was occasionally performed for a very brief time during the late 19th to early 20th centuries, although its role in the development of flamenco dance is minimal. This dance, in 2/4 time, combined elements of Andalusian folk dance with Arabic elements, such as finger cymbals, tambourines and atypical theatrical costuming. However, this bears no resemblance to the performances of Sevillanas, Tangos and Bulerias by the commercial, touristic band of gypsies in the caves of Granada, which Amaya identifies as Zambra in her video "Gypsy Fire". In fact, apart from some of the percussive foot movements found in the Moroccan Shikhate, there is almost no similarity between flamenco and Middle Eastern dance. Even the open-knee hip movements of flamenco are attributed to the African influence from the colonies and/or Indian dance. Absent to flamenco dance are the torso undulations, pelvic oscillations, hip shimmies and rotations, all of which are fundamental components of Oriental. Finally, the soft, fluid, feminine, sweet and joyful external nature of Middle Eastern dance is the complete antithesis of the internal, spring-loaded, strong, defiant, explosive, masculine character of Flamenco.

But is there a more substantial historical basis to this connection? Professor SP Ganguly, who teaches Spanish and Latin American Studies at Jawaharlal Nehru University, seems to think so.

De la Riva, meanwhile, points to the oft-mentioned resemblance between flamenco and kathak. “Footwork in kathak is considered very similar to flamenco dancing. Granandino speaks of the similarity in the rhythms of Indian music and Spanish gypsy music, pointing especially to the hand clap styles and foot work. Here too, there emerges a real historical connection. In Rajasthan, Escudero noted a community called Kartals whose clapping of the hand is very similar to the Castanuelas of Spain.


Then, of course, there is the matter of language. “The language of the gypsies in Spain is Romani,” says de la Riva, “and Romani originates from Sanskrit.” It’s a fact Ganguly concurs with. “Noted indologist Roger Riviere says 30 per cent of the words used in gypsy language are of Indian origin, very close to Sanskrit, particularly the language spoken in north-west India. And the gypsies in Spain have a goddess similar to Kali, she is called Santasara. They have annual festivities that last for a few days, after which the image is immersed in a river.


says de la Riva, “But I believe it’s the gypsies in Spain who have remained closest to their traditional culture. So we have this unique connection with India, we could become the bridge between India and Europe

Now, the Spanish government plans to set up a flamenco center in Jodhpur, India. 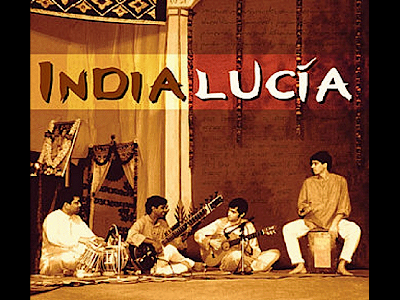 his fascinating project explores the not-so-distant relationship between North Indian classical music and Spain’s flamenco tradition. Flamenco, of course, has long been associated with Spain’s sizeable gitano, or gypsy, population, and all European gypsies (or roma, as they prefer to be called) share a common North Indian origin. And although the roma left the subcontinent sometime in the 9th century, their insularity allowed them to maintain many cultural traits and traditions intact. One of the most famous roma traditions has been their music making, and flamenco’s classic compas, or 12 beat cycles, can trace their origins all the way back to India. Of course the music diverged over the centuries, but the common roots remained, ready to be unearthed and grafted together in a project like IndiaLucia. Recorded between 1994 and 2004, in both India and Spain, the album brings together master musicians from both traditions, including guitarist Miguel Czachowski, sitarist Avaneendra Sheolikar, tabla player Sandesh Popatkar and cajón player Pierluca Pineroli. The result is a masterful blend of kinetic percussion, stately raag-like drone punctuated by fiery flamenco fretwork and soaring vocal improvisations.