THE FOLLOWING STRANGE "MAN MADE MEN"  ARE ALREADY POSSIBLE :-There are two commonly discussed types of human cloning:

therapeutic cloning and reproductive cloning. Therapeutic cloning involves cloning cells from an adult for use in medicine and is an active area of research, while reproductive cloning would involve making cloned humans. Such reproductive cloning has not been performed and is illegal in many countries. A third type of cloning called replacement cloning is a theoretical possibility, and would be a combination of therapeutic and reproductive cloning. Replacement cloning would entail the replacement of an extensively damaged, failed, or failing body through cloning followed by whole or partial brain transplant.It is only a matter of time, months or a very few years before human cloning is a reality for anyone with enough cash, willing to take the risks of a hideously malformed or emotionally damaged child.
Just think how attractive that could be to some dictator(eg Hitler) who fancies the idea of watching himself growing up, or dreams of populating the world with a new race of genetically superior people.
We now have the technology to take a few cells from a modern day Einstein, or a musical genius or a child prodigy
Emotional risks - child grows up knowing her mother is her sister, her grandmother is her mother. Every time her mother looks at her she is seeing herself growing up.
What happens to a marriage when the "father" sees his wife's clone grow up into the exact replica (by appearance) of the beautiful 18 year old he fell in love with 35 years ago? A sexual relationship would of course be with his wife's twin, no incest involved technically.
Genes from humans are already working in microbes, fish, rabbits, mice, pigs, sheep and cows. Some of these humanised pigs may be providers of heart transplants in the future.
Will humonkeys be recognised as morally responsible individuals before the law if they are able to talk?
We need an urgent UN-sponsored global summit on biotechnology followed by international agreement. Either we control gene technology today, or gene technology will redesign us by tomorrow.
[1] CLONE=a group of identical genes, cells, or organisms derived from a single ancestor.
ALREADY SHEEP(DOLLY) 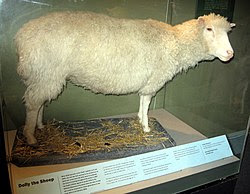 WAS CLONED AND DIEDSome have speculated that a contributing factor to Dolly's death was that she could have been born with a genetic age of six years, the same age as the sheep from which she was cloned