Dhanushkodi was just another port town with a population of around 25,000.
A super cyclone with a wind velocity of 270km/hr crashed into Dhanushkodi on the night of 22-23 December 1964.All structures and dwelling houses were blown up in the storm and marooned.About 1800 people died BY 20 FEET TIDAL WAVES
.On December 22nd at 23.55 hours while entering Dhanushkodi railway station the train no.653 Pamban Dhanushkodi Passenger which left Pamban with 110 passengers and 5 railway staff was hit by the cyclonic storm and high tidal waves and the whole train got submerged under water killing all 115 on the spot

NEW AND OLD PAMPAN BRIDGE
All dwelling houses in Dhanushkodi were blown to pieces in the storm and marooned.Pamban bridge was washed away by the high tidal waves in this disaster."The buildings that braved the fateful day still exist partly buried in the sand and partly weathered by the sea adding a mysterious beauty to the place. 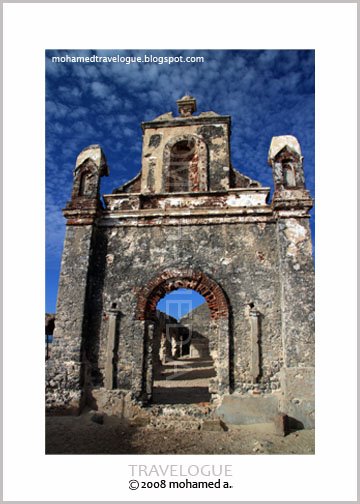 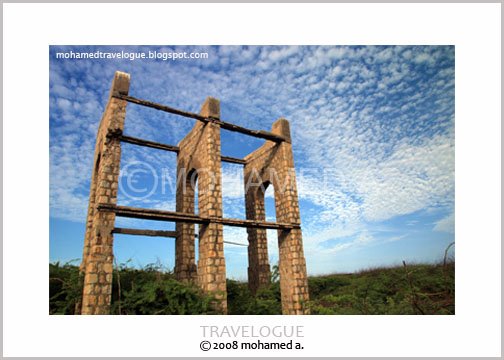 Pictured here is what remained of an Indian narrow gauge train which was swept away as it crossed from Raneswaren Island to the mainland. All 128 passengers and crew were killed in the upturned and totally destroyed carriages.

RUINS OF THE TOWN 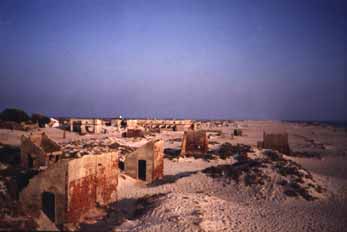 ANOTHER PHOTO OF THE GHOST TOWN

WRECKED FISHING BOAT
The Government of Madras declared the town as Ghost town and unfit for living after the storm, now a small group of fisher folk resides there. For reaching the village one has to go in a four wheel drive or in a fish cart.

sri lanka is not very friendly to India from 1950 onwards
due to  reasons including anti Tamil policy  and history of L.T.T.E. terrorism
those who dream and talk of making a bridge must first think that Sri Lanka may not like it .may even will not allow construction .so stop dreaming of any bridge ,to Sri Lanka 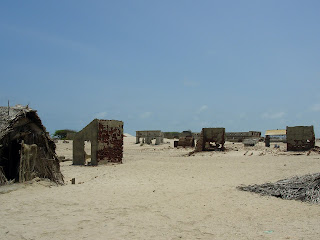 All that remains of Dhanushkodi town

This was a school

Map of Pamban Island before the cyclone-- Prior to the cyclone, the town had been an important commercial centre with a railway station, a customs office, post and telegraphs office, two medical institutions, one railway hospital, a panchayat union dispensary, a higher elementary school and port offices.[8] A port had been functioning since 1 March 1914.[8]A dilapidated church, parts of the railway track and the Puduroad railway station and the ruins of a Vinayaka temple are all that remain of the town.


The bridge is 18 miles (30 km) long and separates the Gulf of Mannar (southwest) from thePalk Strait (northeast). Some of the sandbanks are dry and the sea in the area is very shallow, being only 3 ft to 30 ft (1 m to 10 m) deep in places, which hinders navigation It was reportedly passable on foot up to the 15th century until storms deepened the channel: temple records seem to say that Rama’s Bridge was completely above sea level until it broke in a cyclone in 1480 CE.
Studies have variously described the structure as a chain of shoals, coral reefs, a ridge formed in the region owing to thinning of the earth's crust, a double tombolo, a sand spit, or barrier islands. It has been reported that this bridge was formerly the world's largest tombolo before it was split into a chain of shoals by the rise in mean sea level few thousand years ago
Another theory affirms that the origin and linearity of the Adam's bridge may be due to the old shoreline – implying that the two landmasses of India and Sri Lanka were once connected – from where coral reefs evolved.
Geological Survey of India (GSI) carried out a special programme called “Project Rameswaram” that concluded that age data of corals indicate that the Rameswaram island has evolved since 125,000 years ago. Radiocarbon dating of samples in this study suggests that the domain between Rameswaram and Talaimannar may have thus been exposed sometime between 18,000 and 7,000 years ago.Thermoluminescence dating by GSI concludes that the sand dunes of Dhanushkodi to Adam's bridge started forming only about 500–600 years ago

NASA satellite photo: India on top, Sri Lanka at the bottom of the photo

Tombolo near Karystos, Euboea, Greece
Trainride on the pamban bridge-OLD DESTROYED BRIDGE CAN BE SEEN IN SEEN

Boat leaves soon after 4pm. Time taken is about 3 ½ hours.

No steamer service on Sunday night.

Source: www.slrfc.org [OLD PHOTO]
In 1898, the South Indian Railway ran a Madras - Tuticorin service
that connected with the boat to Ceylon.

The steamer from Tuticorin to Colombo took 22 hours. Source: www.irfca.org

The Dhanushkodi pier with the ship and sea at the background.[OLD PHOTO BEFORE CYCLONE 1964]

A ferry service linked Dhanushkodi in India with Talaimannar in Sri Lanka. The service was part of the Indo-Ceylon Railway service during the British Rule. One could buy a railway ticket fromChennai to Colombo, whereby people traveled by rail from Chennai to Pamban island, go by ferry to Talaimannar, and then go again by rail to Colombo. in 1964, a cyclone completely destroyed Dhanushkodi, a train about to enter the station, the tracks and the pier and heavily damaged the shores of Palk Bay and Palk Strait
Dhanushkodi was not rebuilt and the train then finished at Rameswaram. There was a small ferry service from there to Talaimannar, but it has been suspended around 1982 because of the fighting between Sri Lankan government forces and the separatist LTTE.

witness to history: A view of the Pamban bridge, one of the oldest sea bridges in the world.


this link to Sri Lanka was cut off on December 22, 1964, when a cyclone destroyed the railway system beyond Rameswaram. The turbulent sea and high tides also had their impact on the Pamban bridge. On the fateful night, Train No. 653 Pamban-Dhanushkodi passenger left Pamban at 11.55 p.m. with 110 passengers, including a group of school students, on board.
A few metres ahead of Dhanushkodi, the signal failed. With pitch darkness around and no indication of the signal being restored , the driver blew a long whistle and decided to take the risk.
Minutes after the train started rolling along the sea, a huge wave smashed it submerging all the six coaches under deep water. The tragedy that left no survivors came to light only after 48 hours when the railway headquarters issued a bulletin based on the information given by Marine Superintendent, Mandapam.

started his career as a Probationary Assistant Engineer in the Southern Railways. He also worked at the Bombay Port Trust as a trainee for one year.

In 1963, E. Sreedharan was put in-charge of the rebuilding of the Pamban Bridge, because a tidal wave carried away the part of the bridge that connected Rameshwaram with Tamil Nadu. He completed the construction of the bridge in only forty-six days though he was given six months to do the same. This achievement was admired quite a lot.

▶ 14:50
www.youtube.com/watch?v=tPQ5iTcnXW0
Aug 21, 2014 - Uploaded by CrashTube Video
Japan earthquake and Tsunami 2011 - Shocking video An erupting volcanic island that is expanding off ... Nature, Travel and Tourism
Located at the southeastern tip of Pamban Island, Dhanuskodi is one of the unique attractions of Rameshwaram. It is located ... Believe it or not - The last land of India - DHANUSHKODI

XTREME MOTO ADVENTUREIn this episode, we are going to see some unbelievable scenes from Dhanushkodi blue sea three sides. Amazing landscape it ...
CC