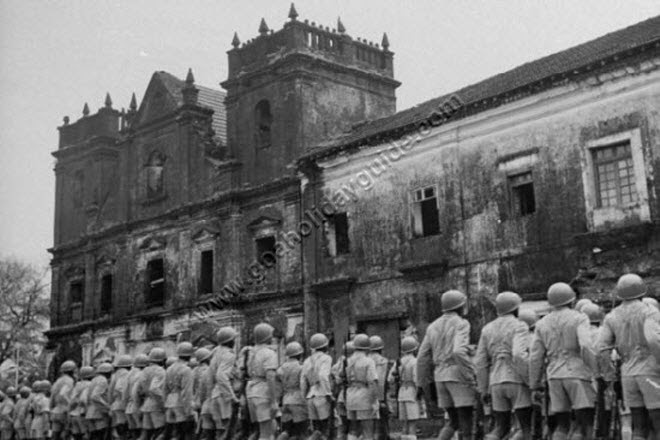 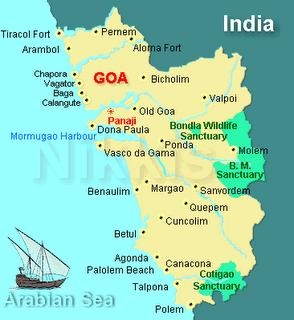 in.rbth.com/blogs/.../goa_liberation_how_russia_vetoed_the_west_4029...
Dec 12, 2014 - In December 1961 Russia stood by India as it liberated Goa and whacked Portugal, a NATO member, which left many in the West with red faces. ... While the British were evicted in 1947, no action was taken against the Portuguese occupation of Goa until 1961 when an Indian military

▶ 1:41
https://www.youtube.com/watch?v=tMapFXDTbsc
Dec 18, 2014 - Uploaded by DD News
The Liberation of Goa was quite a momentous occasion in the already chequered Goan history. December ...

Mr Kaul on India invasion of the Portuguese colony of Goa ... 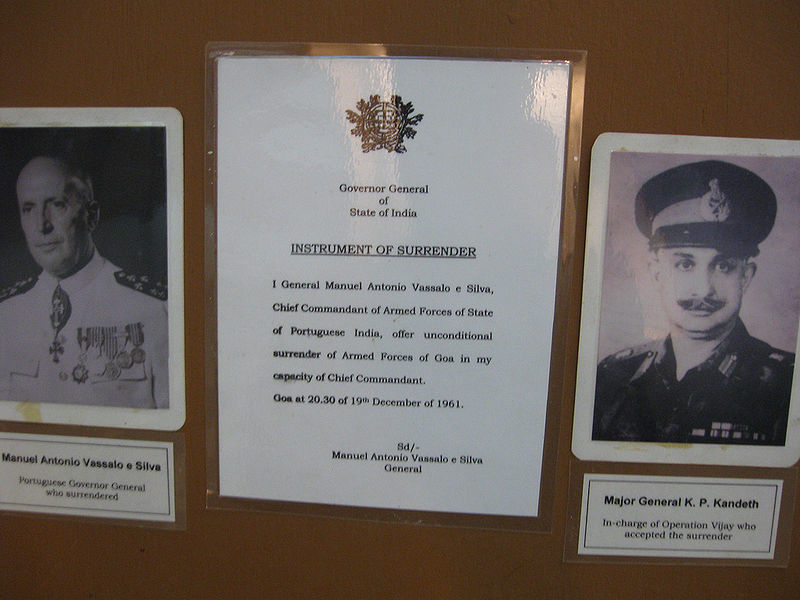 Letter of surrender signed by Manuel António Vassalo e Silva to Kunhiraman Palat Candeth signifying the official surrender of Goa from Portuguese Rule
The armed action, codenamed Operation Vijay by Indian government, involved air, sea and land strikes for over 36 hours, and was a decisive victory for India, ending 451 years of Portuguese colonial rule in Goa. Thirty-four Indians and thirty-one Portuguese were killed in the fighting. The brief war drew a mixture of worldwide praise and condemnation. In India, the action was seen as a liberation of historically Indian territory, while Portugal viewed it as aggression against a long-held colonial possession.Newsletter. Issue 26. December 17, 2011


The Liberation of Goa 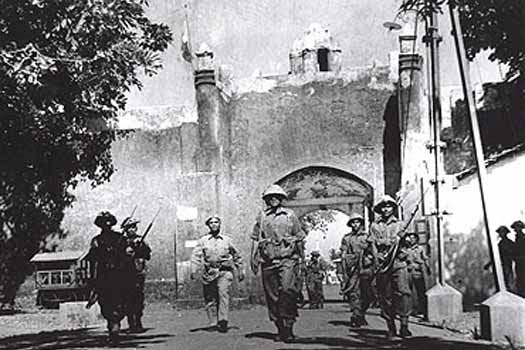 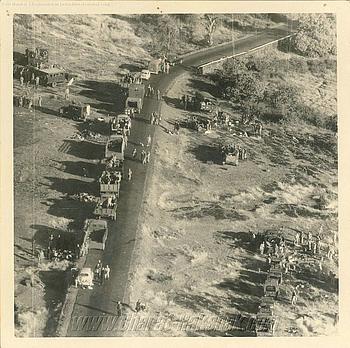 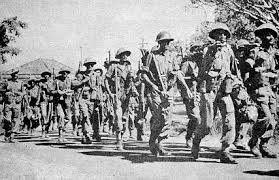 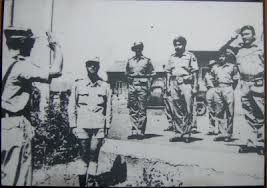 Indian troops are greeted by crowds of Goans as they march through the streets of Panjim, shortly after the
Portuguese retreat.

The Indian Chief of Army Staff, Gen. Pran Thapar (far right) with deposed Governor General of Portuguese India Manuel António Vassalo e Silva (seated centre) at a POW facility in Vasco Da Gama, Goa
The official Portuguese surrender was conducted in a formal ceremony held at 2030 hours on the 19th of December when Governor General Manuel António Vassalo e Silva signed the instrument of surrender bringing to an end 451 years of Portuguese Rule in Goa. In all, 4668 personnel were taken prisoner by the Indians - a figure which included military and civilian personnel, Portuguese, Africans and Goan.
Upon the surrender of the Portuguese governor general, Goa, Daman and Diu was declared a federally administered Union Territory placed directly under the President of India, and Maj. Gen. K. P. Candeth was appointed as its military governor. The war had lasted two days. India lost 34 killed and 51 wounded. Portugal lost 31 killed, 57 wounded, and 4668 captured.
On 18 December, even as Indian forces were rolling into Goa, a special emergency session of the United Nations Security Council was convened at the request of the Portuguese Government. At the meeting, called to consider the Indian invasion of Portuguese territories in Goa, Daman and Diu, Adlai Stevenson, the US representative to the UN, criticized the Indian military action. He then submitted a draft resolution that called for a cease fire, a withdrawal of all Indian forces from Goa, and the resumption of negotiations. This resolution was co-sponsored by France, UK and Turkey, but failed after the Soviet Union, India’s long time cold war ally, exercised its veto.
Upon receiving news of the fall of Goa, the Portuguese government formally severed all diplomatic links with India and refused to recognize the incorporation of the seized territories into the Indian Republic. An offer of Portuguese citizenship was instead made to all Goan natives who wished to emigrate to Portugal than remain under Indian rule.
Relations between India and Portugal thawed only in 1974, when, following a military coup d'état and the fall of the authoritarian corporatist rule in Lisbon, Goa was finally recognised as part of India, and steps were taken to re-establish diplomatic relations with India. In 1992, Portuguese President Mário Soares became the first Portuguese head of state to visit Goa after its annexation by India. This followed Indian President R. Venkataraman’s visit to Portugal in 1990.
Following their surrender, the Portuguese soldiers were interned by the Indian Army ,The captivity lasted for six months
Ex- governor Manuel António Vassalo e Silva was greeted with a hostile reception when he returned to Portugal. He was subsequently court martialed for failing to follow orders, expelled from the military and was sent into exile. He returned to Portugal only in 1974, after the fall of the regime,
In an article titled "India, The Aggressor", The New York Times on 19 December 1961, stated "With his invasion of Goa Prime Minister Nehru has done irreparable damage to India's good name and to the principles of international morality
Nikita Khrushchev, the de facto Soviet leader, telegraphed Nehru stating that there was "unanimous acclaim" from every Soviet citizen for "Friendly India"
China neither condemned nor applauded the invasion, it was enjoying cordial relations with India, although theSino-Indian War would begin only months later

A Canberra PR.9 taking off. The Indian Air Force used the small and lightweight Canberra bombers. 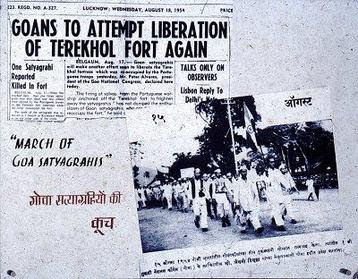 A 1954 attempt by unarmed protesters to storm Goa and liberate it was suppressed by the Portuguese. 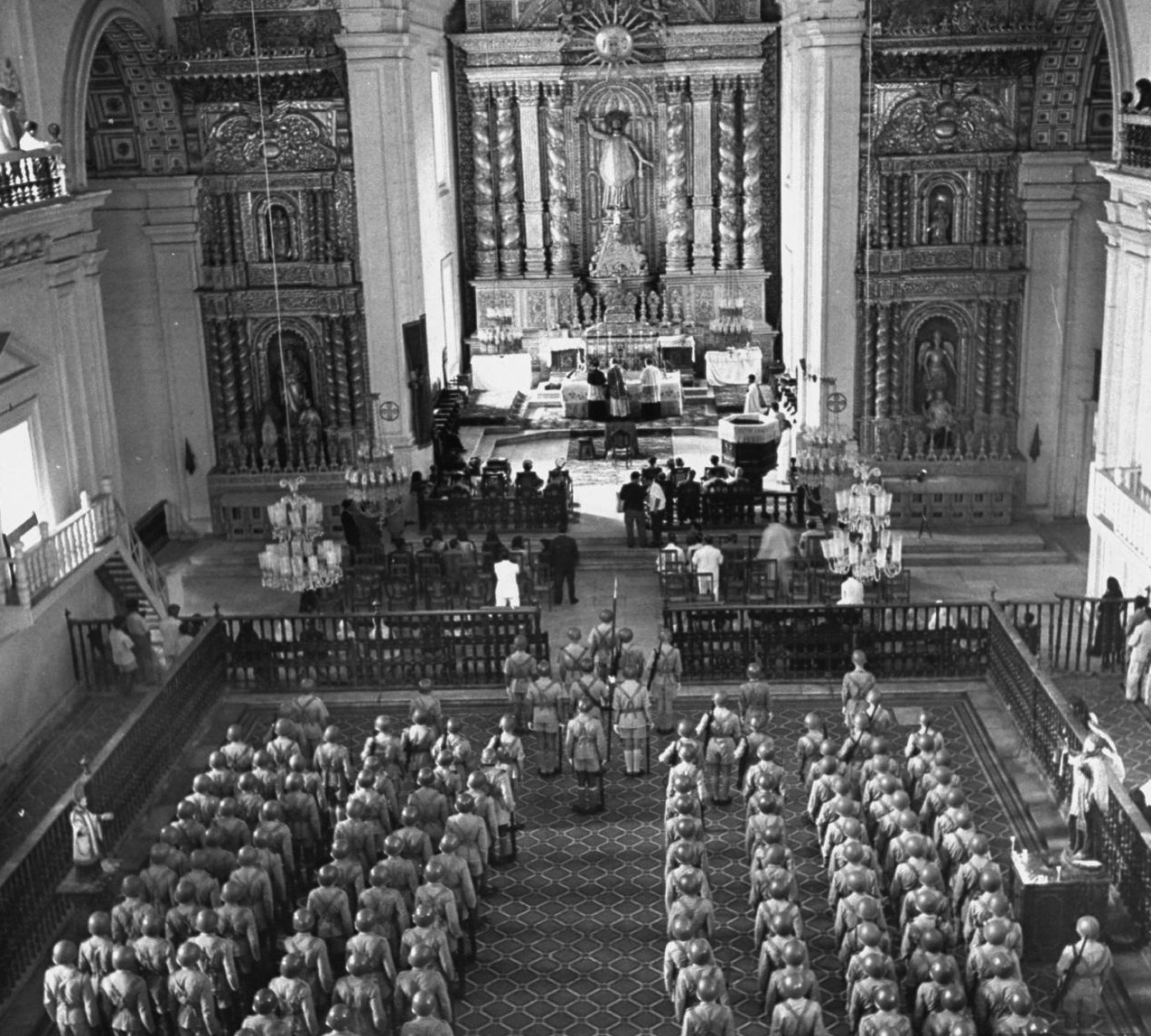 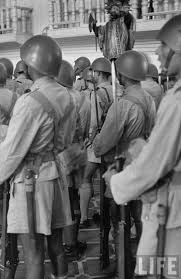 i n s vikrant TOOK PART IN THE WAR

THE LAST PORTUGUESE TROOPS FLYING OUT 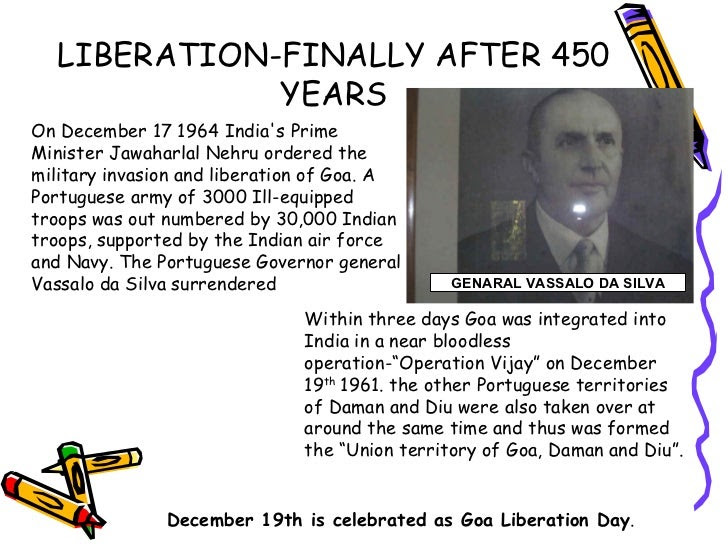 
Mangaluru: Antonio Costa, the popular and charismatic three-term mayor of Lisbon-Portugal of the Socialist Party has become the Prime Minister of Portugal. Antonio Costa, who traces his paternal roots to Goa, and the leader of Portugal’s Socialist Party was named prime minister and tasked with forming a government on Wednesday after weeks of political instability caused by an inconclusive election last month. It is learnt that Antonio’s family members used to call him ‘Babush’, a commonly used term of endearment in Konkani for ‘little boy’.

But the ‘little boy’ over the years has assumed key positions in the Portuguese government, apart from the incumbent office of Leader of Opposition and Mayor of Lisbon. Antonio has also served as the minister for internal administration, minister of justice, minister for parliamentary affairs among others in his political career which stretches over nearly three decades.
Portugal’s ‘Gandhi’, 54-year-old Antonio Costa, who has become the new Prime Minister of Portugal after the coalition of leftist parties reached a majority, has a Goan connection. Kin and supporters of the left-leaning former Lisbon mayor, who won Portuguese hearts and earned the humble moniker after he transformed the fortunes of Mouraria, a drug-infested and prostitution-ridden neighbourhood of the Capital, cannot contain their joy as Costa appears to be just a step away from taking over reins of the debt-ridden former colonial country, which ruled Goa for 451 years.
“Yes, we are definitely proud of how he has managed to reach the top echelons of the Portuguese political sphere,” Antonio’s first cousin, Anna Kaarina Jussilainen Costa told reporters in Goa. Anna lives in the more-than-a-century-old Costa ancestral house, one of the many which line the stunning Rua Abade Faria in Margao town. Anna’s mother and Antonio’s paternal aunt Sinikka Jussilainen Costa, also has fond memories of Antonio’s Goa sojourns. “On one of his later visits, some 15 years ago, he came to Goa along with a Portuguese parliamentary delegation. He visited us here. He will succeed and ensure Portuguese does not follow the way of Greece,” she said. “Now he has made us all so proud… He was always keen on politics. There used to be endless debates between him and his father over political issues,” she says as she recalls his visits to Goa.
Antonio Costa is the son of Orlando Costa, an accomplished poet and writer.Antonio’s grandfather, Luis Afonso Maria da Costa, hailed from Goa.The appointment comes after Costa’s anti-austerity alliance with communists Greens and the Left bloc toppled the 11-day-old con servative minority govern ment in a dramatic parlia mentary vote earlier this month. Portugal’s political difficulties are being closely watched in Brussels and Costa has sought to allay fears his anti-austerity drive could propel the country back to deficit-busting policies that forced it into a three-year $83 billion bailout in 2011.
Costa, the son of the ferociously anti-colonial writer, the late Orlando da Costa, whose classic ‘O Signo da Ira’ is set in the Margao neighborhoods he grew up in the 1930s and 40s. Later, when studying in Portugal, the senior Costa became a staunch opponent of the Salazar dictatorship, member of the (then outlawed) Communist Party, and a well-known Lisbon intellectual who retained life-long affection and connection to his ancestral Goa.
His son is a political prodigy. Antonio Luis dos Santos da Costa has been Portugal’s minister of parliamentary affairs, minister of justice, and minister of internal administration. He headed his party’s list for the 2004 European elections then served on the committee on civil liberties, justice and home affairs, before becoming one of just 14 vice-presidents of the European Parliament.
In 2007, Costa gambled big. He ran for Lord Mayor of Lisbon, the troubled centerpiece of an urban area where nearly 30% of Portugal’s population lives. After winning, he immediately moved his office to Mouraria, a notoriously crime-infested locality, where he started getting rid of the drug-peddling and prostitution that used to flourish all around. Similar efforts steadily extended city-wide.
Despite the prevailing wrenching national economic crisis, Lisbon has transformed: it is now the safest, cleanest, greenest, and most livable big city in Europe. Its mayor has been re-elected three times. When Costa won the right to lead his Socialist Party in September 2014, it seemed certain he would sweep to power in the 2015 elections. But despite the prime ministerial candidate’s overwhelming personal popularity, things have not quite turned out that way.

By Joseph Zuzarte |Posted 26-Nov-2015
Anna Costa, Antonio's first cousin in Margao, Goa, is excited at the news that he has become the new Prime Minister of Portugal

Antonio Costa, who traces his paternal roots to Goa, and is the leader of Portugal's Socialist Party was named prime minister on Wednesday.
Antonio's grandfather, Luis Afonso Maria da Costa, hailed from Goa. Antonio's father Orlando and uncle Joao were born in Mozambique to parents of Goan origin, and spent their childhood in Goa before moving to Portugal. While Orlando stayed on in Portugal, Joao returned in 1965.
Anna Costa, Antonio's first cousin in Margao, Goa, could barely contain her excitement at the news that he has become the PM.

Costa’s Uncle Joao da Costa’s Finnish wife Sinikka Jussilainen  Costa(right), and his first cousin Anna Costa. Pic/Joseph Zuzarte
She said they received confirmation, through Whatsapp, of the news from Antonio's half-brother in Portugal, Ricardo, who is director of a newspaper in Lisbon.
ALSO READ: We're just waiting to celebrate, say Portuguese PM Antonio Costa's Goan family
"We've interacted (with Ricardo) a little bit since this news broke. He's very busy, as you can imagine. Ricardo's the one who confirmed the news for us," Anna said.
"We're very happy and wish him all the very best."

Portugal PM Antonio Costa
And how do they plan to celebrate the swearing-in of her first cousin later tonight? (Goa gets the Portuguese RTP satellite channel)
"I've already popped the champagne! And we're going to pop more champagne tonight and the next few days," she said, laughing giddyly.